Home Sharings Music The Music We Are 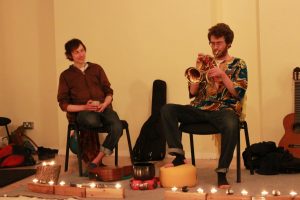 Last year’s “The Music We Are” Wake Up retreat at the EIAB started with an idea a few years ago. Nadine, a Wake Up friend from Groningen, the Netherlands, took it on board. She, together with some friends, organised the retreat for the first year. I attended the retreat and was really inspired.

After this first retreat, I was in touch with Nadine and we thought, “Let’s do it again!” Nadine and I met in Amsterdam, hung out and got some ideas flowing for the 2nd retreat. We started to organize last year’s retreat together, with Jona, Evelyn and Julia joining us later to be part of the organizing team. I led the music sessions for the week.

There is a group called the Mindful Artists Network, founded by a musician from Findhorn, Scotland and a film-maker from Berlin. Both women are members of Thich Nhat Hanh’s Order of Interbeing. I started to lead my own workshops, in part drawing from their ideas, and we piloted some of them with Wake Up London. I tried out new material for the retreat in which we had 8-12 hours for the music workshop sessions. Although I had a lot of inspiration and ideas coming out of my ears, I actually had considerable anxiety on the first day of the retreat! Without knowing how things would happen I wondered how to plan all the session, the schedule, how the retreat would work and flow…

The second music session we did was incredible. It was a full moon and there was a really strong energy. As 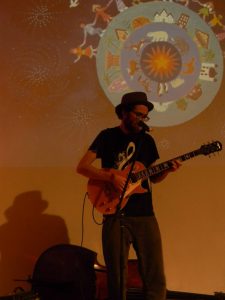 I mentioned, I had done a lot of preparation – I had planned the sessions and had so many ideas before the retreat. When it came to this session, I decided to take a risk and let go of my plans and pre-conceived ideas of what the workshop should be like. I had notes on a piece of paper to remind me of my plan, but I put it in my back pocket just in case and led the session spontaneously.

I knew where I was going, but there was quite a shift in letting go and becoming fully present to the situation and becoming flexible in how I facilitated the workshop. It turned out to be the best session I had offered so far! In my private music teaching this is generally the approach I take – to have a direction for the lesson but also be spontaneous and respond to what the situation calls for. In this workshop I took the leap and led the session like this. Though I always felt this was how I could offer the most in what I facilitate, actually doing it became very liberating.

I remember at the first music retreat, I listened to a fantastic dharma talk by Brother Phap Trach. He explained that in the morning of his dharma talk he asked his brothers what he should talk about and they replied, “improvise!” He then gave a deep teaching that to be present is to improvise, and gave jazz music as a clear example of this.

I first learned these lessons of letting go, improvising and becoming deeply present through music. Now through mindfulness practice, this understanding is becoming deeper and more concrete. I learned a lot from leading this retreat and particularly jumping that hurdle in how I led that full moon workshop. I will often still make notes before a workshop and keep them in my back pocket, half for comfort, half as a personal ritual and preparation, and half to amuse myself (and maybe because I’m a little neurotic too, haha!)

For those who are interested in organizing the music retreat, what suggestions do you have
For organising anything in a team, here’s what we learned. As does and will happen, there were some tensions within the organising team – but we overcame them. We had support from the monastics and we had a mindfulness practice. In any retreat, the most important thing is to keep harmony amongst the organisers and in the group. Even if there is loads of “stuff” to be done, if the vibe between you isn’t good, then you need to stop and re-establish a solid foundation and togetherness. One of my favorite monastic precepts is something along the lines of “Don’t rush unless it’s an emergency”. Sing a song together, tell some jokes or share and create some happy moments to bring you together and create a good atmosphere. From this ground you can then work together mindfully and harmoniously.This is far more important than just saying “We have to do this and this”, which we were doing a bit. If there is strong sisterhood and brotherhood between you, then you have a boat that can keep you afloat on uncertain waters. And remember: if you are awake to the present moment, then you can improvise!

In terms of music sessions, it’s really about what is authentic to you, what is your experience. Everyone’s experience will be unique and everyone’s experience is completely valid. Looking deeply into mindfulness, you can see how life is a song, a dance. Everything can become music if we open ourselves to it: the rhythm of our breath, the rhythm when we walk during our walking meditation;the song of our sharing. All these things can be true music … we can eat as a song and as an orchestra. When approaching music, we construct and organise sound together and can bring this awareness into the experience.

We can also expand our minds to see how “this is music”and “this isn’t” is a concept we create in our minds. We can explore this both in what we commonly think of as music: in song, in playing instruments, in dance, but also in daily activities – and see where the boundaries blur. How fixed are these boundaries? For me a clear parallel can be drawn in meditation. Although it is unquestionable there is benefit to sitting meditation and that it can allow us to settle and build concentration, meditation doesn’t stop when you finish your session of formal practice. Entering the meditation hall, tying up your shoelace, even brushing your teeth can be moments of deep meditation. The same is true of music: although it is unquestionable that when we are playing instruments together, singing and dancing, that that is music, the music doesn’t stop when the last note plays.

I think it’s best to have an attitude of “let’s explore this” rather than “I’m here to teach this.” We’re here to explore something together, to hold and create a space, and to offer skills and experience. In facilitating workshops I have learned as much as, if not more than, the people whom I have offered them to. I find this attitude to be more encouraging.

Do you have any final thoughts about this retreat?
I think the most beautiful element that everyone took away with them was this: it was quite incredible how much love there was in six days. We came as a group of people who didn’t know each at all and created so much togetherness. I felt it was very much the power of music and mindfulness together creating this family atmosphere.

When music and mindfulness are combined in that space and in that way, it’s incredibly powerful. For a considerable time after, I was very moved by all the people still in touch with each other and how deeply affected they were from that week.

Of all the retreats I have attended, I feel that the love created within these groups in such a short space of time is so so powerful.

We hope to continue doing this every year and that the love keeps growing!

Tell us about the activities you’re involved in with Wake Up London. 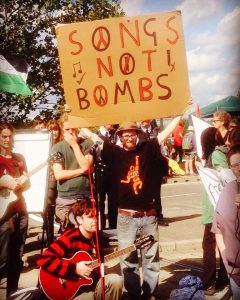 We have a really vibrant community. In the Spring of 2014 we ran a series of Wednesday evening sessions. They have been very much in the spirit of Engaged Buddhism, exploring areas such as our relationship to technology, women and men’s circles and also “Wake up in Motion”, evenings of different movement modalities, from yoga to drama to dance.

I’ve led a number of music workshops with Wake Up London, exploring many different areas: how we listen, some sitting meditation exercises, some games, singing together, working with our senses, how to improvise, moving together …

For example, one exercise connects walking meditation to walking in rhythm and also showing our own rhythm, our heartbeat. This demonstrates what I was talking about earlier, how everything can be, and is, music and rhythm.

There is also a strong seed to create a Wake Up group to explore the interconnection of creativity and the sacred. Throughout human history creativity and spirituality have always existed side by side, not as separate entities. In the materially dominated mainstream culture of today it appears there is a separation and the arts have also become in some cases a pure commodity. We have the music industry, the art industry, where in many cases artistic heights become equated with material success, fame and social status rather than a means of deep spiritual connection and expression.

I envision creating a platform to explore this interconnection of creativity and spirituality. To hold this within the context of Wake Up as we have been doing with “The Music We Are” retreats, but also to make it far broader to include many varied perspectives from all sorts of creative people and artists. In the book Good Citizens: Creating Enlightened Society, Thay offers his insights as part of the “Buddhist contribution to a global ethic”. I envision having a Wake Up contribution to the arts, but to be open to the catalogue of other traditions in relation to creativity and the sacred, so we can learn from each other and be united in diversity.

This feels to be a strong part of my contribution to Wake Up, the Plum Village tradition and my life’s work, my service. The process of nurturing this volition and seeing what will come from it is very exciting!

Charlie Shuttler has been exploring mindfulness in the Plum Village tradition since Thich Nhat Hanh came to Nottingham, England in 2012. He’s been involved in Wake Up London ever since. He is a musician and interested in exploring the role creativity and the arts have to play in creating peace, joy, happiness and love within ourselves, our families & communities, and how this contributes to society.