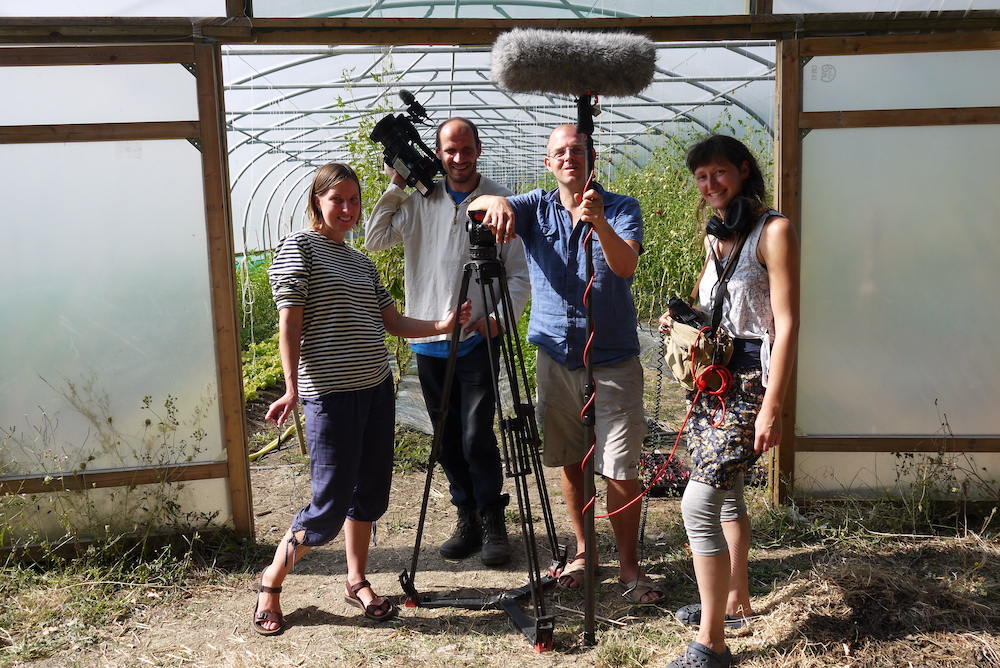 During the summer of 2016, I came to Plum Village Happy Farm during the Wake Up retreat for the third time, and the farm enchanted me again.

Christiana Figueres was also there. She had a very powerful speech, saying that everybody can do something about climate change at their own place and with the means they have.

I felt that Happy Farm needed a film, so I decided to do my best to make it happen.

Since I worked as a film production manager, I had many filmmaker friends. I called my friend Jan, a documentary director and cameraman, who was interested in meditation. I told him I knew a special place, and he could make a short film about it.

And this is where all began.

He said, “Yes, I like the idea, and I can help you. But I won’t direct it, because I know very little about it. I can operate the camera, and you can direct it.”

I said, “Me? Are you crazy? I’ve never directed anything. You guys studied five years to learn directing and now I should try it just with no experience?”

I was scared of it, but Jan convinced me by saying that he will help me as a tutor and co-director.

In the end I remembered, that it was actually my childhood dream: to be a documentary director. I thought, “Ok, maybe I can try it now.”

The process with the sound recording was also funny. I asked several friends, who were sound designers, whether they would like to go to shoot it in Plum Village. But they were all busy. My friend Jana, who never tried sound recording, was very keen on going with us (she works in environmental education). She said: “I think I can learn to record the sound. I already learned how to drive a car, so why not learn this.” So she had 30-minute tutorial with a professional sound designer, and we set off to France.

We knew what we wanted to do: to introduce the charming place—Happy Farm in Plum Village—to people who never experienced it and to speak to the farmers and show their practices. 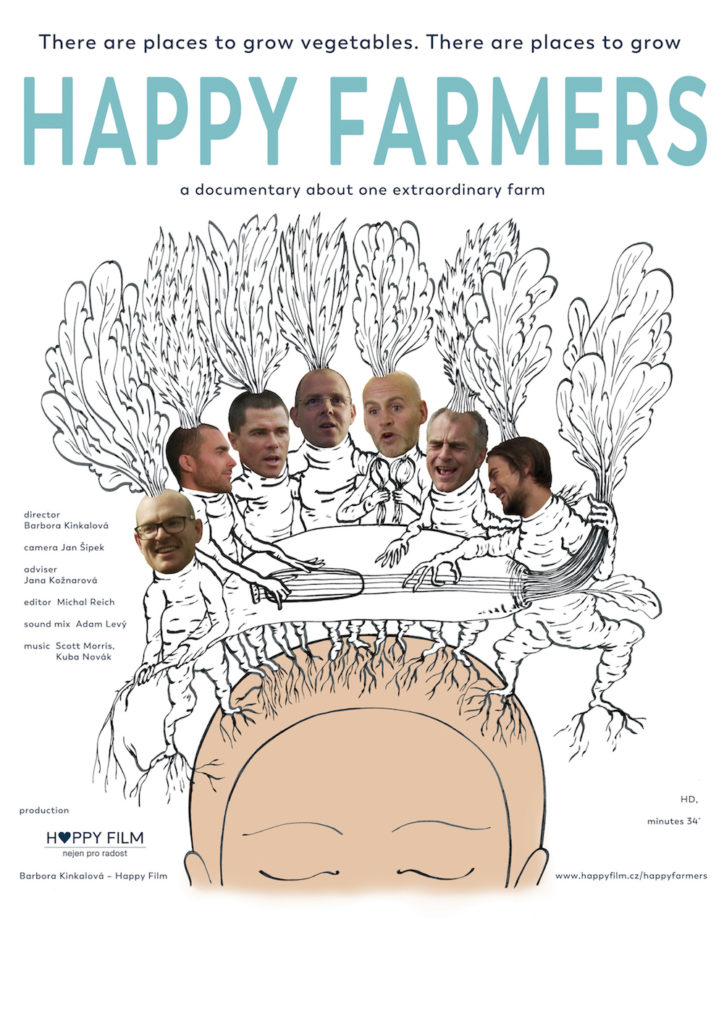 We just didn’t know how to do it. Apart from Jan, we didn’t have the professional skills. Of course, I tried to prepare some kind of a script with notes, questions, etc.

I also got a lot of advice from Jan about how to talk to people, what kind of shots to make, etc. We also consulted the film’s structure with the editor.

So we started the filming, and I felt like a bull in a china shop. I tried to concentrate on several things at the same time all day long. We filmed from morning till the evening; the first night after we finished, I thought I couldn’t do it. I was totally exhausted.

I didn’t know if the way I communicated during the interviews was right. I felt like I had no sense for the right timing of the questions and for making the right decisions about the shots. I was desperate and texted my boyfriend back home that the film will be a catastrophe.

But then, I realised it is possible to see this struggle from a distance and take it as a practice.

Someone from Plum Village told me that every project has two sides: the project itself and the inner process we go through while working on the project.

I told myself, “Okay, let’s observe what is going on.” I stayed with this approach by reminding this to myself a few times during the busiest shooting days, and this helped a bit. In the evening, I practiced deep listening and mindful eating with my crew mates. Even though I didn’t do much, this different approach of “observing“ was already present in the back of my head. Even though the filming was still hard and exhausting, it didn’t feel like as big as a rollercoaster as before. For a few seconds, I managed to see myself driving the rollercoaster in the right direction, and smile and embrace.

For the next two years of working on this film, I tried to keep this approach. I kept forgetting about it when my editor was postponing the editing of the film further and further that I nearly got into a fight with him a few times and thought about replacing him.

Then I came back to myself and thought, “First, you don’t have anybody else to edit it. And second, you know he is the best person to edit it. So you just have to be more patient, that’s all.” In the end, he edited it very well. 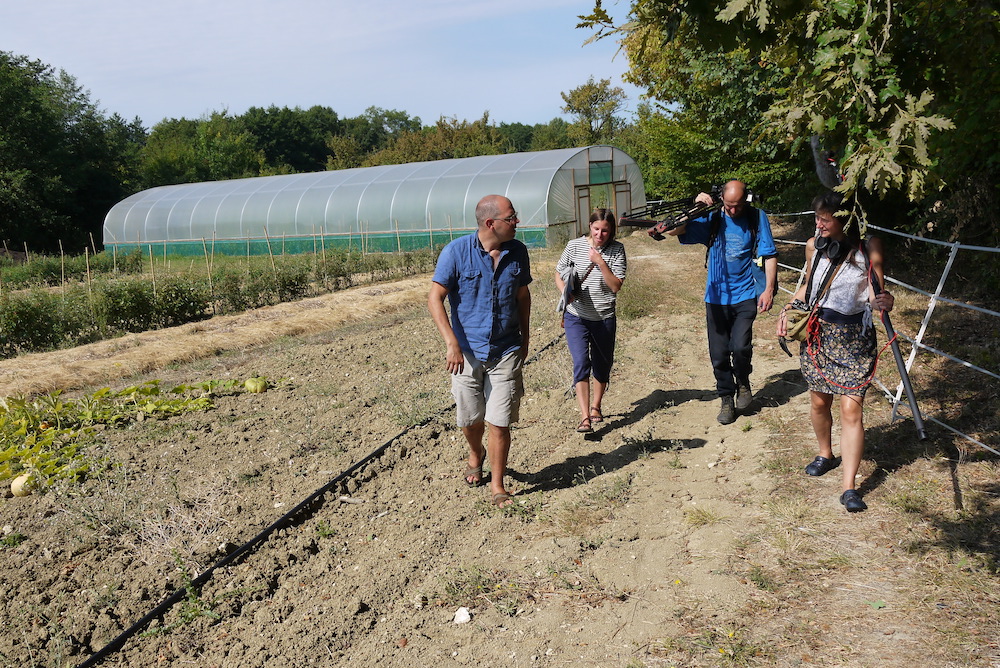 Also, I learned about how not to be a perfectionist. The editor and sound designer were great professionals who worked for free, or for a symbolic fee, but they didn’t have too much time for it. So we had to leave things imperfect. We had no money, except crowdfunding. By the way, thank you to everybody who contributed to our crowdfunding campaign!

During the work on the “Happy Farmers” movie, I also discovered the true joy from creative work. My happiest days were in the editing room, where I was present for the magical process of a movie being born from a pile of rough material. I will never forget this feeling, and I would like to direct another film when the right time comes.

It is helpful to see our inner process, while working on any project. There were a lot of ups and downs for me, but I learned a lot. The more I managed to be present, the more I realised what was going on and the more I was learning.

Now I hope that it was all not just for my learning. I hope, first and foremost, for people to enjoy the film. To come to Plum Village, to fall in love with the wonders of Mother Earth and practices of “happy farming” and spread the word further. Because, as Christiana Figueres said, “Happy Farm is the solution for the problems of the world.” 🙂

You can see the film here: https://dafilms.com/film/10468-happy-farmers-en-version 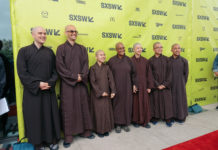 Walk With Me premiere at the SXSW Film Festival 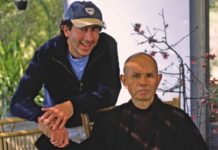