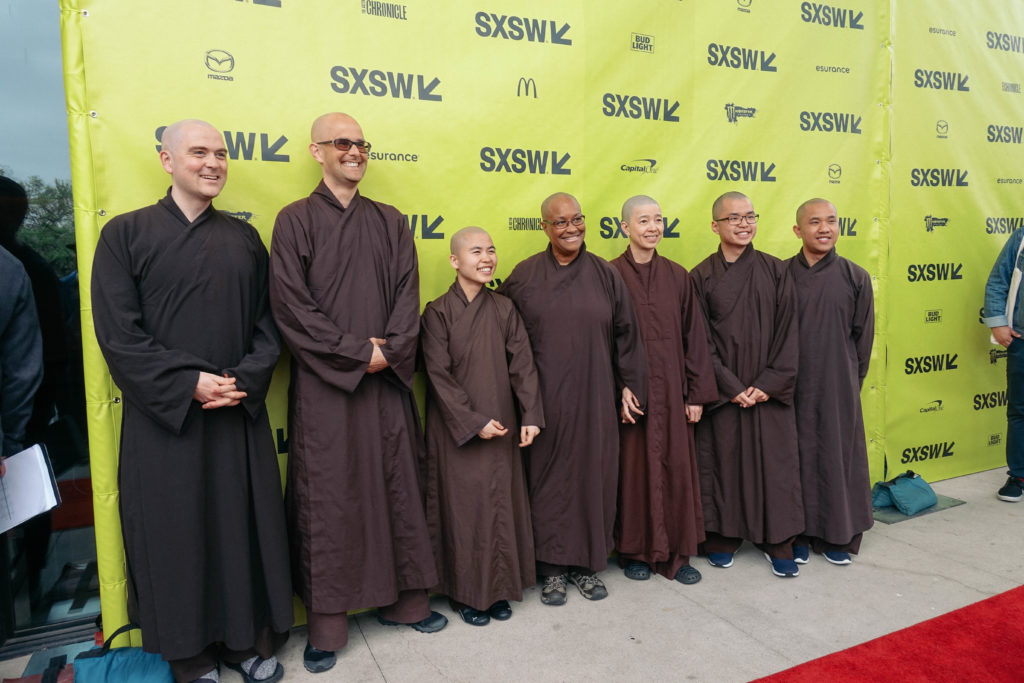 Elli: Nhu-Mai and I went to Austin to support the world premiere of Walk With Me, a 90-minute feature documentary made by Brother Phap Linh’s brother Max Pugh and his co-producer and co-director Marc J. Francis. The two of them spent five years on the road with Thich Nhat Hanh and the community to capture their experiences. They shared that it started first as a road trip film, but it slowly evolved as they got to know the community.

Max and Marc invited me to support the premiere because of my relationship with the Sangha and my background in film, so I can be a bridge between these two things.

One novel aspect of being at the premiere was that the festival itself was super chaotic, which is a stark contrast to the content in Walk With Me. All of us there, lay friends and monastics, were interested in how we might bring the peace of our practice to the SXSW festival. At the festival there was a film stream, a music stream, and a technology stream with a ton of people attending. Throughout the festival, we offered different mindfulness events. We did walking meditation and a sitting meditation flashmob at sunset. 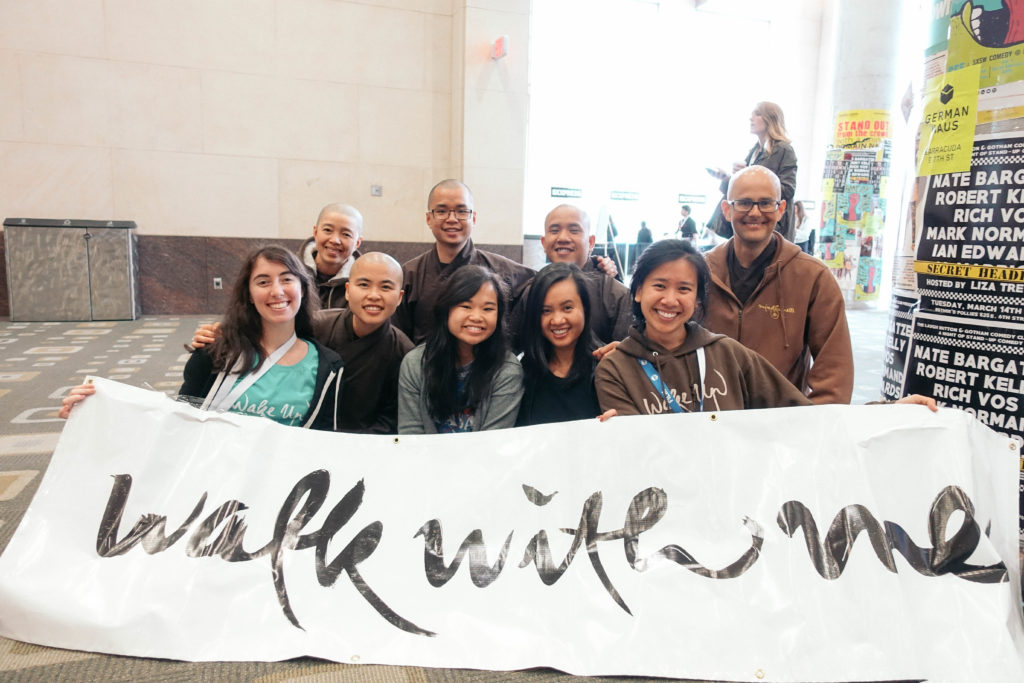 One of my favorite moments was when we did a walking meditation inside the convention center, which was the main space of the festival. It was always super busy; many people picked up their badges and waited in line to go to places throughout the building, including purchasing food and merchandise. We decided to do a walking meditation on the opening weekend through this space. Many people joined us from both the local Sangha and festival. Nhu-Mai and I were floating around, explaining to people what was going on.

At one point, the walking meditation turned around and went back in the same direction. When that happened, someone turned to me and exclaimed, “Wait. This isn’t a line to get into something?!” (laughter) They continued to share that “I joined because I saw a big line, so it must be a good event.” But the line turned out to be a walking meditation. So I responded, “Surprise! You just went for a mindful walk.” (laughter) I explained to them what we were doing and they walked with us a bit longer, saying, “I should try this on purpose” instead of thinking that it was a line.

Another special thing about the film festival was that monastics came from different Plum Village practice centers to support the premiere. Nhu-Mai and I have practiced at many of these centers over the years, and we hadn’t seen some of them in a while. So there was a really joyful element of reunion linked to the whole experience.

Seeing the film for the first time, I feel it will be an amazing opportunity for our community to share our practice and Thich Nhat Hanh with the world. Movies are such a common denomination and visual medium to translate and share through. The film has a beautiful potential to reach out in a different way than we do. Also, it’s a good reason for us to gather as a community, and there’s a hope that it will provide support to Sanghas around the world.

We actually experienced this potential for the film to bring Sanghas together in the short time we had in Austin. It was a real family reunion in addition to enjoying the festival and one another, and we shared tears, hugs, food trucks, and red carpets! It was truly an experience with a family. 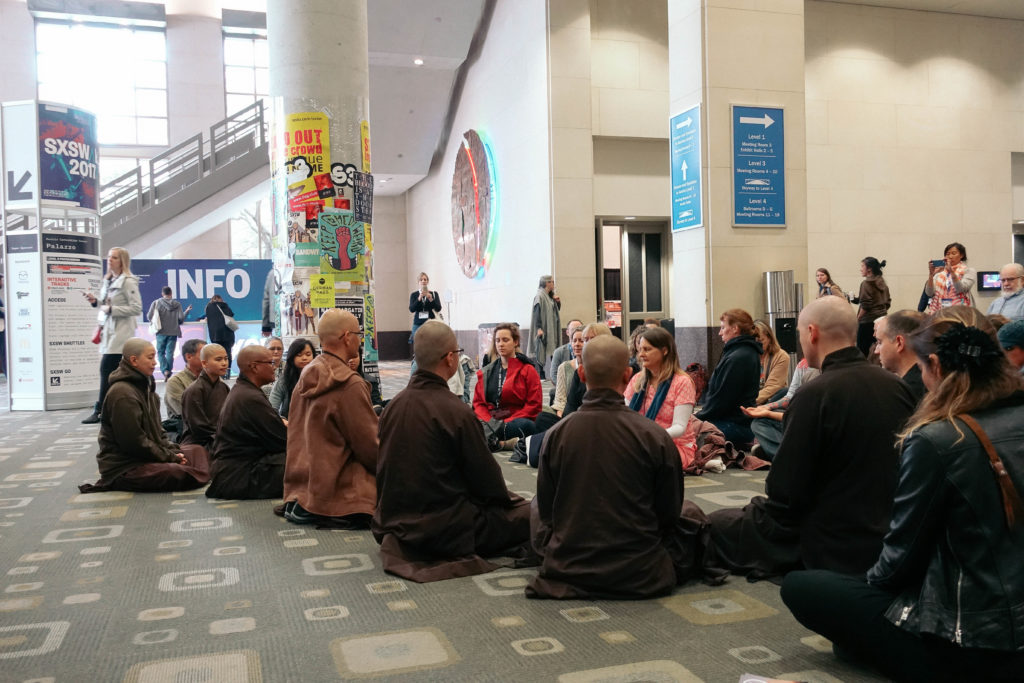 Nhu-Mai: I first met Marc J. Francis and Max Pugh through the Thich Nhat Hanh Foundation. I’m currently the Grants Coordinator for the Foundation, and Walk With Me had applied to the Foundation for grant funding from the Dharma Sharing Program. Eventually, the directors found out that I had lived in Austin for eight years, so when Walk With Me got accepted into the SXSW film festival, they asked “Nhu-Mai, would you like to help us do some of the ground work for the festival since you have connections to the community in Austin?” So I helped to find lodging for the monastics, coordinate transportation, coordinate food donations from the local sangha, organize the mindfulness events, and promote the events to the local community.

In terms of significant moments during the festival, one moment was when we did a flashmob meditation in the convention center. As Elli mentioned, we did some walking meditation, but on another day, we also did a flashmob. Sometimes, I forget that there are people out there who like to practice mindfulness, other than myself. I’m not sure how that mindset happens, but it’s the mindset that “only our community likes to practice mindfulness.” The idea that a stranger on the street practices meditation, or a prison inmate practices meditation, or a Christian practices meditation. The public perception used to be that Asian martial artists, Buddhists, hippies, or celebrity artists practiced meditation, so sometimes it’s strange for meditation to be outside of those stereotypes.

But there really are other people out there; people different from myself and people outside of our little Plum Village community who are touched by the mindfulness practice. This was proven when our group was doing the meditation flashmob inside the convention center. There were strangers walking by, and they’d stop. They’d see us sitting, and you can see that they’d really want to join us, but they didn’t know if they were allowed to. So I’d walk up to them and invite them to sit with us, and they’d feel so uplifted to be a part of something meaningful to them. So many different people joined us: women, men, older adults, young adults, people of color, non people of color, hipsters, business folks, etc. 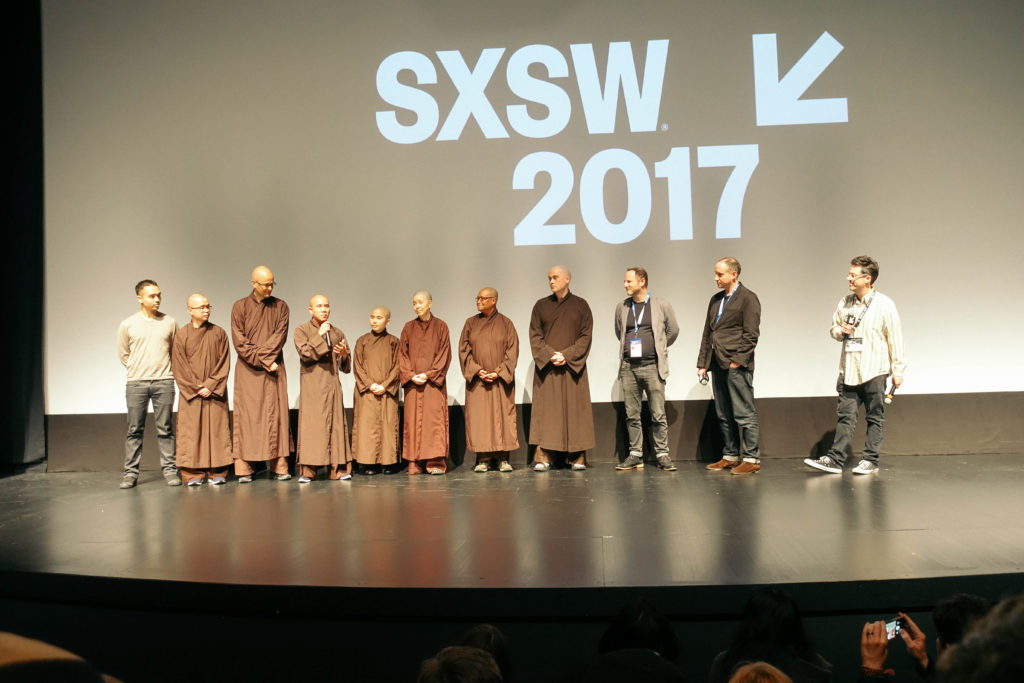 Sometimes I’m afraid to spend time with people different from me. I’m afraid that we won’t be able to relate to anything or that they would judge my spiritual practice. Unfortunately, the reality is that sometimes people will indeed judge others for their spiritual practice, but other times, like during the meditation flashmob, I saw beautiful living proof that we could connect with each other, regardless of our cultural, spiritual, or socioeconomic background.

Another meaningful moment was during the world premiere. It was the first time I had ever watched the film. Before then, I had heard a lot about it. So I joked around with my family, who don’t understand what I am getting into, and told them, “Hey, if you have been wondering what I have been doing for these past seven years of my life, you can learn all about it in this 90-minute film.”

I didn’t know what the film would be like, but after watching it, I think it did a beautiful job of accurately portraying our community and our relationship with the practice as well as the joys and struggles we all have. So I’m very excited for this film in that not only it will reach people who may not have access to the practice, but I can share it with my family and friends in a short, concise, complete way and say, “This is what I have been doing. If you want to understand a really important part of me, you can watch this film.” 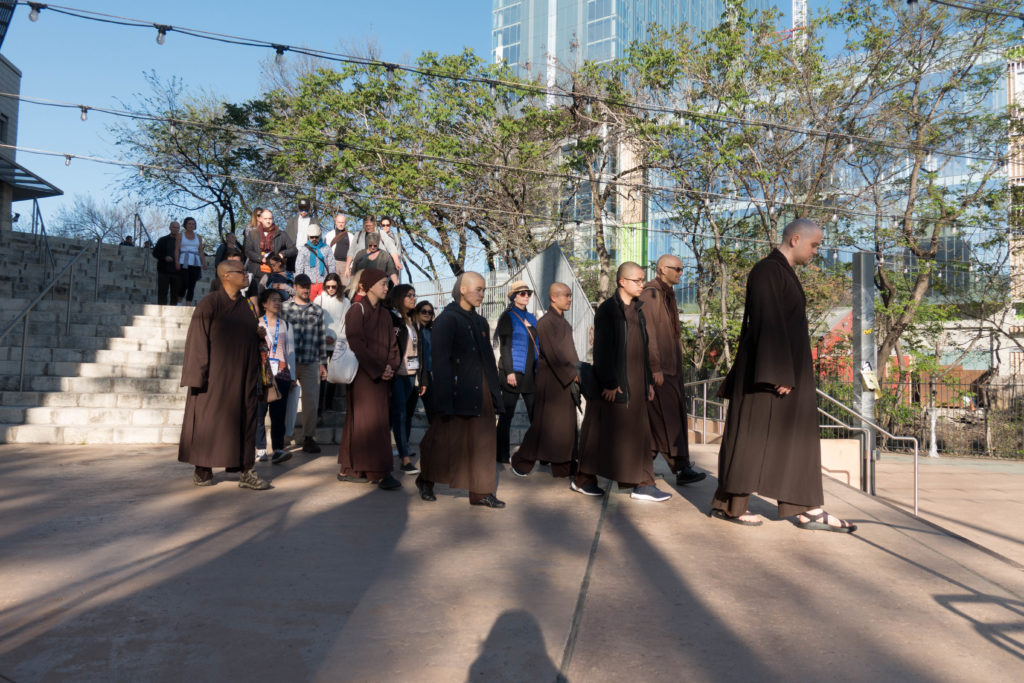 Elli: Max and Marc hope to have wide release of the film in the U.S. by this coming Fall 2017. Right now, they are waiting for a U.S. distributor to come on board. Some ways they shared that we can support the film is to like their Facebook page and join their mailing list in order to show distributors that people are interested in watching a feature film about Thich Nhat Hanh and Plum Village. This information will encourage the distributors to show the film more widely. They also hope that, once it’s in theatres, local Sanghas will go to see the film together and have mindfulness events around the film, like we did in Austin.