Home Africa, Asia & Oceania Asia/Oceania Be Mindful: Save a Piece of Green in Your Mind 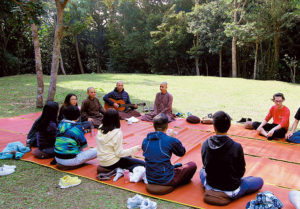 On a weekend where the sky is full of haze, freshness is still all around in Lotus Pond Temple, Lantau Island. A group of youth under 35 participated in a retreat organized by Wake Up Hong Kong. They are not listening to Buddhism teachings with their backs straight, but they are walking, cleaning, eating, singing, and sharing with the Plum Village Sangha, experiencing mindfulness in their daily lives.

Mindfulness can be a key to bring back the mind to the present moment. It is not difficult to find. It is in the walking, eating, and even sleeping. At the retreat, birds sing at sunrise, and retreatants do mindful walking with the monastics. “Breathing in, I take a step when taking an in-breath. Breathing out, I take another step when taking an out-breath.” As demonstrated by the monastics, people walk step by step in silence from the temple to the hill and back. “I’ve never tried to walk like this. Slow but firm. Even when we walk on our own without talking, we don’t feel bored, but we feel enriched by being accepted by the Earth,” said Ah Sum, a newcomer to the practice of mindfulness. She finds herself walking too fast in daily life, but this time she was aware that feeling the nature through her steps and her eyes are two different things. 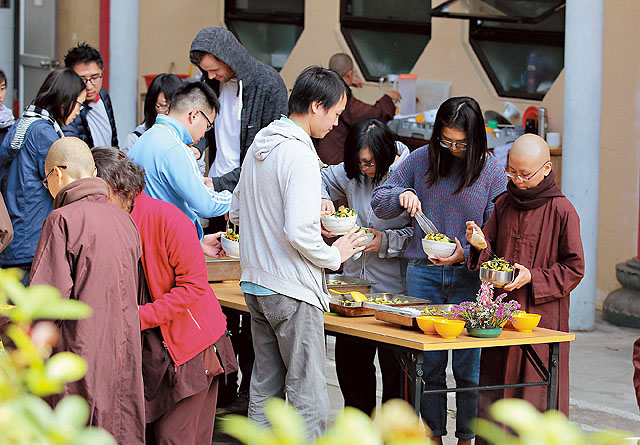 The feet, the land, and the nature are linked together. Every step with our head down is the awareness of the present moment. By being wholehearted, the heart has no time to be tired about worrying about the future, and the mind and the steps become relaxed. It is said that walking meditation is one of the most popular activities in the retreat, probably because the city dwellers rarely get up early to walk in the quiet nature. Walking, cleaning and even just sitting down and watching falling leaves in mindfulness is good enough, even though it may not bring you instant enlightenment. Mindful eating is another activity that brings the most insight to the participants. Three vegetarian dishes, soup, and rice are served in buffet style. But there are requirements: eating in silence and chewing slowly to feel deeply how the food comes from the soil to the bowl.

It is difficult to imagine being in a dining hall filled with dozens of people eating, and the only sound is that of chewing and that of bowls and chopsticks. Participants put the bowl in the palm of their hands, chewing thoroughly one mouthful of food before putting another one into their mouth. Not being a vegetarian, Ah Sum said, “The food was more delicious than I thought. It is cooked lightly, but the taste is surprisingly good. Maybe it is because we eat in concentration without cell phones around, and we taste the original flavor of the dishes.” Some participants did not like okra or tofu puffs originally, but as they chewed slowly and thought about the origin of the food, they finished everything in the bowl they resisted initially and surprisingly felt not bad. This slow journey of eating food is just right for city dwellers to reflect on food waste in between countless meals and gatherings around the end and the beginning of the New Year. 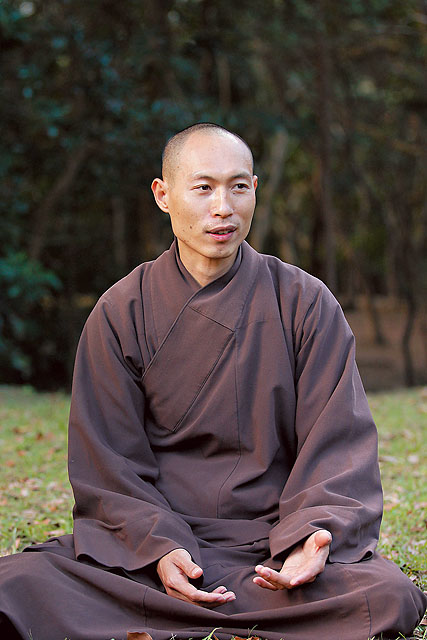 After the meal, retreatants queue up to wash the dishes. Because the trace of food left on the plates is light, a few pots of water are only needed to wash dozens of bowls and chopsticks. The monastics said it is a common practice because frugality is so usual here. Total relaxation, Dharma sharing and group activities are followed afterwards to learn to face ourselves and our lives. But if mindfulness is only practiced at a retreat as a one-time experience, it can only recharge our mind and body at best. But how can we bring mindfulness back to the community, practice in perseverance, and even change society and the environment? Maybe through small actions such as leaving no waste during holiday hiking, wasting no food during dining even by taking away unfinished food, or not being dominated by desire during shopping. It seems the real mindfulness practice starts by the time we leave the retreat…

Many of the social chaos and destruction, to put it directly, come from people’s mind. This is why the practice of the mind is so important. Mindfulness can be non-religious, transforming anger, fear, jealousy, greed and other emotions into positive energy as well to become a better self, happier person. This is the starting point for Wake Up Hong Kong, composed of Plum Village monastics and young practitioners who follow Zen Master Thich Nhat Hanh. Youth retreats are just one of the activities. In order to bring mindfulness into the community, they also organize many meditation activities that alter the public’s perception of meditation. 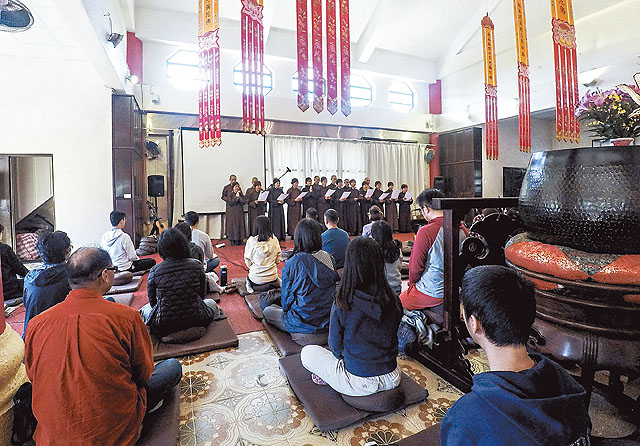 The best example is the meditation flashmob at the end of last year. Under the Ferris Wheel in the middle of the city, passers-by were invited to join the Sangha for meditation and mindful walking. This distinctive model is clearly aimed at the young people. Brother Phap Chwng, the leading organizer of retreats and meditation flashmobs, felt more and more young people are disappointed and lost in the future over the past few years. “They have many classes, activities, and become very busy, while worrying about the future and social issues, so they neglect caring their heart. In fact, by giving spaces for listening, young people like to share what is on their mind. Why don’t we gather together to learn mindfulness, come back to the present moment, and enjoy the simplest happiness?”

Thanks to mindfulness, 18-year-old Sze Chai, a female practitioner from Wake Up Hong Kong, can always keep a bright smile even though school work is busy in the department of Anthropology at the university, and her life after graduation is not clear. Sze Chai followed her mother to practice meditation in Plum Village since the age of four, and now every weekend she travels a long distance to Lantau Island to practice. Compared to competition in society and school, she thought this place could let her relax. The value of people is not measured by grade or job, and the monastics are friendly and kind to everyone. 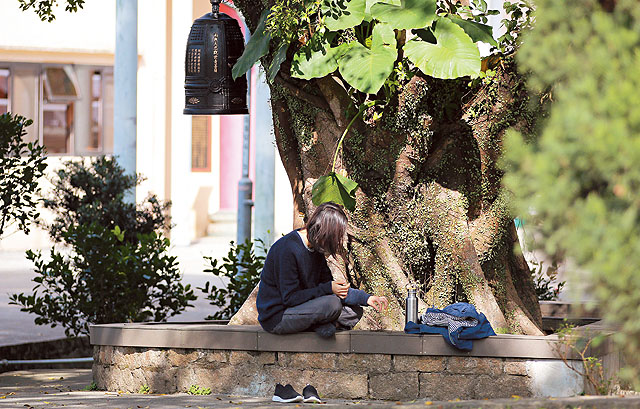 In recent years, Sze Chai found friends who began to worry about the future, and their hurry in their lives make their smiles disappear. In contrast, she began to reflect on the meaning of her practice: “Why don’t you feel that disappointment? Is it that I do not care about that society? Do I come to Plum Village to escape the city’s troubles or to crave for the monastics love?” After getting answers from these questions, she decided to go into the crowd, understand the concerns of friends, and then bring happiness to the people under the mountains. Now in addition to helping young people with meditation every Sunday in the Lotus Pond Temple, Sze Chai and other young practitioners hold practices in town every month as well as quarterly retreats and meditation flashmobs once a year. At every event, she plays the guitar and sings, and pays special attention to listening to everyone’s troubles and worries in order to put herself in others’ shoes and discuss how to use mindfulness to solve problems in life. She said, “Hopefully, more people will know meditation as a way of living to slow down and feel the tranquility in chaos.” 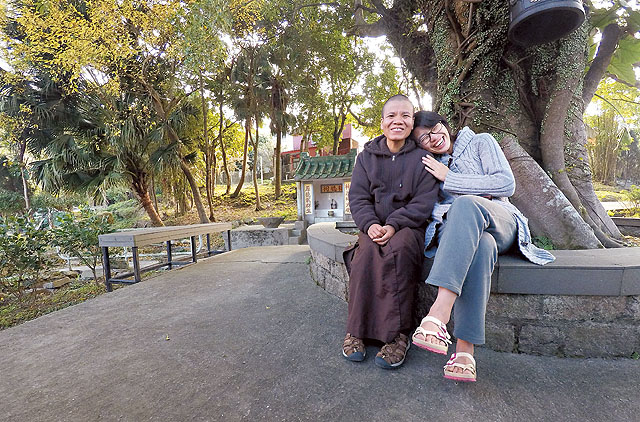 Practice is easier said than done. Even Sze Chai, who has 14 years of experience, thinks that the mindfulness practice is mostly difficult in a society that is rich in materialistic entertainment, fast-changing, and noisy everywhere. Just walking mindfully can be a headache because of how fast Hong Kongers walk. So we asked Brother Phap Chwng for practical methods to bring mindfulness into our daily lives.

For many people, sitting quietly for meditation and focusing on our in-breath and out-breath are the most difficult things to keep doing regularly. Noisy environment, busy work, and so on can be the reasons for forgetfulness. He believes that some mindfulness meditation mobile apps can help enhance the commitment through features like daily notification, customized duration of meditation, a mindfulness bell to help people be in a calm mind, or even daily meditation recording and sharing and discussion among users. Apps such as MindBell or Insight Timer can be helpful to practice daily. 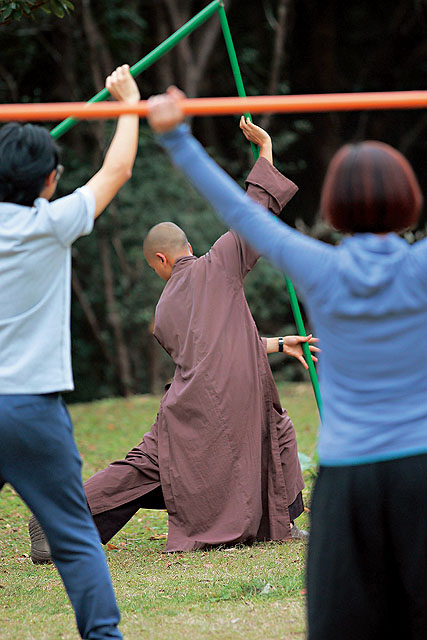 2. Make an Agreement with Yourself

In a retreat, it is normal to walk slowly and eat in silence. But in our daily lives, it seems to be out of tune. The monastic brother said that it takes time to get used to and adapt for mindful living. Therefore, it is advisable to make an agreement with oneself, for example, to do mindful walking while taking the stairs or walking in the corridor out of your home. There is no need to force practice at other times because when mindfulness becomes a habit, it will transform in a subtle way. However, making an agreement is very important, even if it is for only one minute a day.

When we usually talk about the practice, we immediately have an impression of a person alone in remote mountains. But as times change, the practice has to be updated, too. For example, in retreats or other occasions, like-minded practitioners can set up groups in WhatsApp, Facebook, or other social networks to join forces and discuss how to practice mindfulness. It is worth mentioning that some Plum Village monastics also use iPhone and Facebook!

This article was originally posted in Chinese.