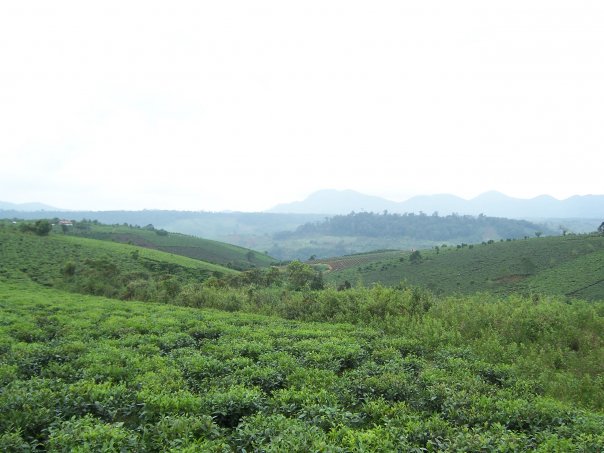 In Lam Dong province, daily incense smoke curdles
In forests and on Buddha’s faces, on altars of monasteries,
A drizzle begins at 6 am, September 27, 2009, a sign
From the divine heavens, today’s forecast in these
Jasmine Tea fields, you feel the purest love appeal,
How practicing monks and nuns feel, in real peace,
Thunder rumbling in unease today, as clouds freeze display.

Nguyen Phuong Nga, Foreign Ministry spokeswoman calls it
”A non-violent dispute, between Buddhist factions,” But 180
intellectuals seem to openly question “clearly Illegal actions,
in presence of police who ignored calls for help from victims
of attack,” suffering a thundering blundering of cursing lips, eyes,
sticks and fists, graffiti on Avalokiteshvara statutes vandalized,
Screaming out side Bat Nha mobs say “Don’t Make us angry (guys)
and hurt you. If you don’t leave, you will suffer the consequences.”

Truth changes from media government’s lips
To Buddhist eyes, to locals with sticks, who yell,
Prodding monks and nuns, they hit, fists cheer,
Glass breaking at nuns shaking hips, whipping ears,
With slanders that cost 70,000 Vietnamese dong,
6$ mercenaries, scary, paid off to attack monastics,
Drastic result, brainwashed violent cult are poverty’s victims,
One attackers fist bleeds, so a nun gets him cotton balls,
Alcohol and gauze to clean his wounds, “Looking into eyes,”
She said “I saw that he was deeply moved; he realized
We did not hate him, but took care of him wholeheartedly.
After we dressed his wound, he lowered his head to thank us,
Situated himself quietly in the corner, watching us
Next to each other in the rain and the storm” above us.
“We felt so happy to realize that we loved each other,
And that we could sacrifice our lives for each other,
For our ideals, for this path of understanding to love” another.

Zen Master Thich Nhat Hanh’s voice reverberates in mountains
Saying praying displaying that “Bat Nha is a fragrant lotus
That has bloomed from the mud of fear, anxiety, ignorance
Corruption and abuse of power. You have the Bat Nha lotus
In your hearts (each hour).  It is the aspiration to practice
and help others. It is the Beginner’s Mind. It is the Mind of Love.”
And with this push and shove, the thundering mobs voices,
The freezing rain on skin is not as harsh, being homeless, is
Not being alone in the dark, sunlight reappearing above
Mountain cliffs, that lifts up the Bodhisattva of compassion, with a passion,

Despite threats and persistent harassment from police and government,
Venerable Thich Thai Thuan, abbot of Phuoc Hue Temple,
is offering a sanctuary to 379 Bat Nha monks and nuns.
At his own risk, like Germans who hid Jews, Turks who hid Armenians,
We cannot hide, when the winds, rains and thunders come from behind us,
We must stand as Bat Nha reminds us, chanting “Here is our beloved Bat Nha,
With those who carry in our hearts the Great Vow,
To live together and to build the Pure Land right here” (and now).