I was marked by several documentaries in my life. Among them dealt with meditation in prison: “Doing Time, Doing Vipassana” and “The Dhamma Brothers.” After seeing then, I wanted to pursue that route.

When I was still in France, I had the chance to volunteer at GENEPI, a militant student organization that helps to organize activities in prison in France. For nearly a year, every week, I was in Osny’s Detention Center (a sentence of less than two years “theoretically”) with several friends. We facilitated art history activities, and I realized the ease we had in talking with the detainees. Something lit up within me. In September 2014, I started criminology studies at the University of Montréal. I was very curious about the practice environments so I decided to spend time in a transition house, a place where people coming out of prison can be assigned before rejoining the community. With two friends, we took part in community evenings every week. One evening, I came with meditation benches and I proposed a practice for several minutes. A lot of people came and showed their appreciation for the experience. I was still unsure of myself, and I waited a few months.

I was struck by the seriousness of the practice of the people, the total commitment of chaplaincy services, and the warm welcome of correctional officers, penitentiary staff, and detainees.

The following summer, during a retreat in Plum Village, I met many meditation practitioners who proposed meditation and yoga practices in the south of France. I said to myself: Why not me? When I returned to Montréal, I tried to create a group at the provincial prison (less than two years’ imprisonment). It did not work. A few weeks after this attempt, I was at a meditation practice offered by True North Insight, a Sangha in the tradition of the Insight Meditation Society/Forest Tradition. At the end of the evening, I learned that a group was involved in a penitentiary (more than two years’ imprisonment). I jumped at the opportunity. I attended an information meeting, and I sent all the necessary documents, including a certificate of good conduct. At the end of September 2015, I had the opportunity to go in a penitentiary for the first time to practice meditation.

The first time I saw the walls of the penitentiary, I was struck by the area and the security level of the facility. In France, the institution where I went was also very safe but less imposing in size. In addition, we crossed open spaces to get to the practice site – the church of the penitentiary – while in France, I never had the opportunity to go to the exercise yards. The layout was totally different. The group came regularly and offered a practice in the Plum Village tradition: a 30-minute guided or silent meditation, walking meditation, teaching, and informal sharing in small groups. Soon I was struck by the seriousness of the practice of the people who participated, the total commitment of chaplaincy services, and the warm welcome of correctional officers, penitentiary staff, and detainees.

Since I was motivated by this practice and I was helped by my head of studies at the university, I started a practice with families of detainees in the semester of Winter 2015. In February I was invited to come four times to offer 2-hour meditation sessions. There was such excitement that I now have the opportunity to go there once a month. In March 2016, I had the opportunity to go to a new transition house in Quebec City, where I offered two sessions for 2-3 hours of meditation (or 5 hours on the same day) to people who just got out of the penitentiary. The first session was open to all who wanted to participate and the second one to the participants of a violence reduction group. The second group thought it would be a conference about meditation, but they were very surprised when I pulled out the meditation benches.

The second group thought it would be a conference about meditation, but they were very surprised when I pulled out the meditation benches.

While they were quite restless at first, they quickly went with the flow and even stayed for another 20 minutes. It was a practice of three hours and twenty minutes with people who lived with a lot of impulsiveness in their daily lives. They offered to the group very inspiring stories, and I was surprised by the gentleness that permeated the room after the practice.

At the beginning of September, I will be training in a center for teenagers with substance use problems. I’m thinking about a meditation program that I could offer to young people who will be present, and I am also interested to provide a practice for the medical personnels. I would like to have the opportunity to practice psychiatry, palliative care, geriatrics with victims of crime, with medical personnels, and professional counseling professions. 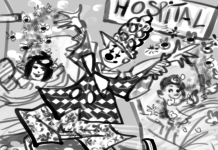 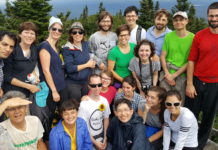 Wake Up Montréal at Maple Village