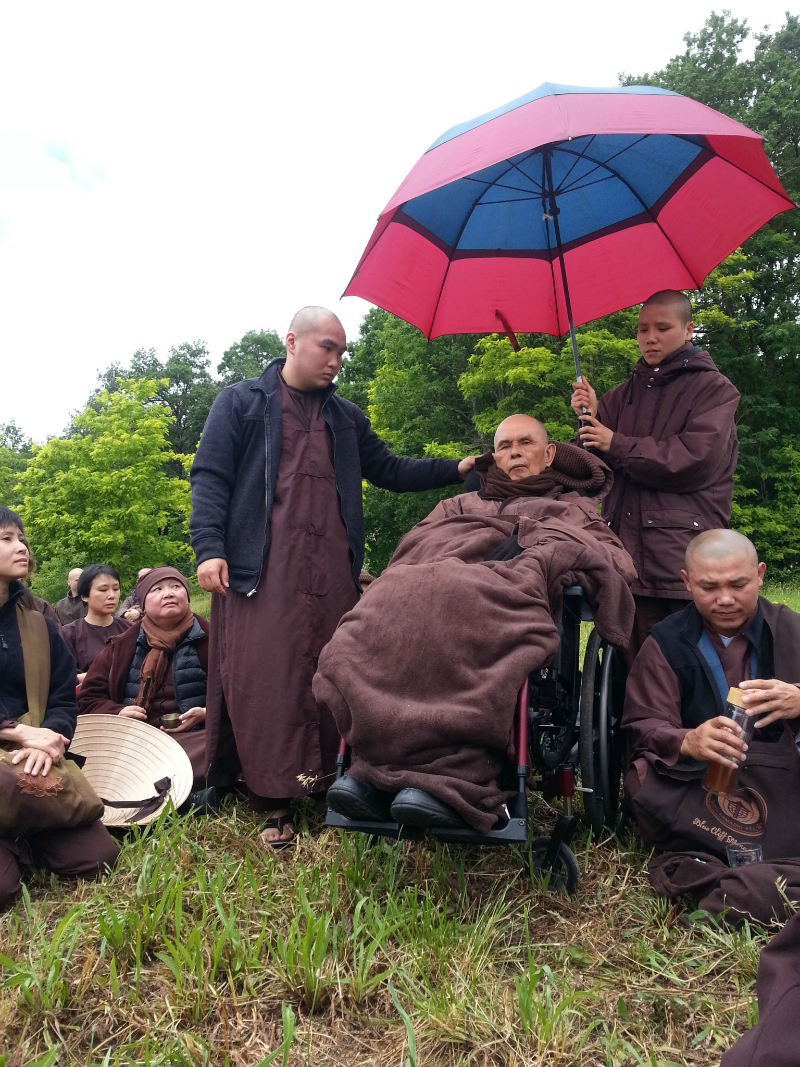 I would like to share with you about my moment with Thay during the 21-Day Retreat in Plum Village, France, and my reflection about this. Please take a few breaths before you continue to read, so you will feel as if you were there, too. This is my purpose of sharing this with you, my friends.

On June 14, 2016, I had a moment with Thay on the hill in New Hamlet during the second half of the retreat. We had a Day of Mindfulness at New Hamlet, and Thay joined us to walk up the hill (his attendants pulled his wheelchair upwards, of course). We all sat there on the hill, while Thay was drinking tea and enjoying the view and the people. I was close to him in the front, and I wanted to prostrate for him, but I was hesitating a lot about whether to ask to do it or not because people just sat there and took pictures of him. No one did the touching of the Earth. Finally, I was brave and asked a senior nun, who was taking care of Thay, if I can prostrate to him. She said yes!

She called me to come closer to Thay, so I came in front of him and did the touching of the Earth fully to his feet. I also invited my mother and father to prostrate together with me. I imagined my mother using my body to blend with me to touch the earth together. Sitting down with the back of my hands, arms, forehead, and knees on the ground, I went back to the time when I was an aspirant, wearing the gray robe and preparing to be ordained in the 3-month ‘Stepping into Freedom’ program during the Rainy Retreat in Thai Plum Village last year; then as a novice wearing the brown robe and practicing the daily mindful ‘gathas’ (short verses that help us practice mindfulness in our daily activities) in the classroom. I also recalled the time when I smiled, holding a begging bowl in my two hands and walking down the village road; then the moment of sitting in the meditation hall of the Lower Hamlet and listening to the chanting Namo Avalokiteshavara on the first day of this 21-Day Retreat, and now I was doing the prostration in front of Thay. I felt calm, light, and deep gratitude.

Thay transmitted trust, confidence, love to me, and the encouragement to his students to practice, be solid, and peaceful inside.

The moment I stood up, Thay and I had eye contact. They were eyes I will never forget in my life—true kindness and compassion, deep understanding, strong, solid, powerful with love—and it felt so warm and safe. He transmitted trust, confidence, love to me, and the encouragement to his students to practice, be solid, and peaceful inside. I felt so moved inside my heart. I felt strong, and I melted at the same time. I felt that with this one look, he penetrated deep within me, and he saw me clearly and understood everything. Or this could have been the other way round; with this deep mindful look, I was the one who understood and that I, myself, penetrated Thay deep inside me. I felt that the big tree inside me moved its leaves happily with the wind. The grass on the hill around us was also moving with the wind there. It was a beautiful moment. All around us were still and at peace. 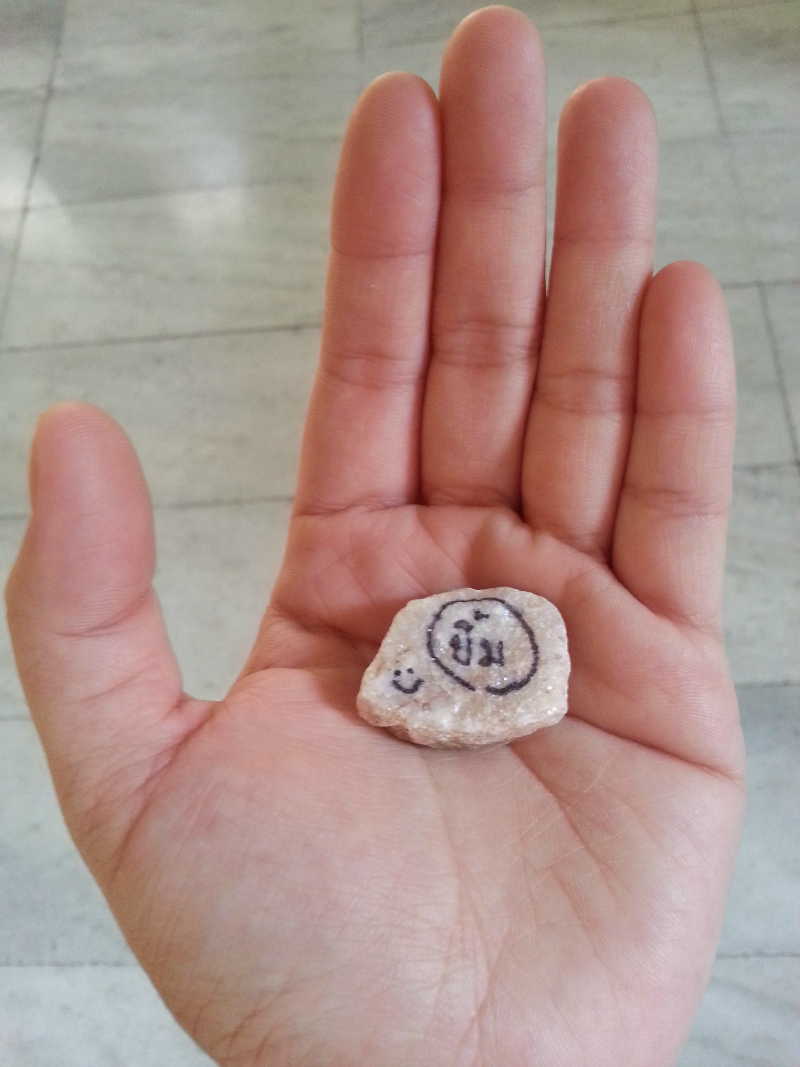 I continued to sit there in front of Thay, while he continued to drink his second cup of tea with his left hand. I waited there because I had a small stone from Thai Plum Village to give to him, which I wrote the calligraphy in Thai ‘Smile’ on it. Thay looked at me and nodded and nodded again. So I turned to his attendant who then told me to go back to my seat to eat lunch (we all had packed our lunch before our walk to the hill). I replied to him, “But I have a stone to give to Thay.” I opened my hand to give him the white stone. His attendant took it and smiled so much that his eyes looked like they became two thin lines. He then handed it to Thay, and Thay tilted his head to see the little stone with Thai word ‘ยิ้ม’ pronounce in Thai ‘Yim’ means ‘Smile’ with circle around it. He nodded twice, and his lips turned into a smile. I think he remembered this word in Thai (he used to write ‘ยิ้ม’ as one of his calligraphies in Thai).

His attendant extended his hand again for me to go back to my seat, and then I started to eat lunch. Thay finished his cup of tea and made a sign for his attendants to take him down the hill. We all got up to our feet to bow to him. We continued to finish our meal and enjoyed the view there. After a while, it rained and we gathered ourselves to walk down back to New Hamlet. After Thay left, I started to feel shy as people looked at me a lot and smiled. An auntie sat closed to me and had tears in her eyes. She smiled at me, so I smiled back. After that, I didn’t look at anyone anymore because I felt so shy and I felt my cheeks turning pink.

Not long before this, I studied with Sister Chan Doc in Thai Plum Village during the 3-month Rainy Retreat, and I submitted to her my homework about sitting meditation. She wrote at the back of the paper, “Thank you my dear. Keep going further, and bring it more into your daily life.” I didn’t know exactly how to “bring it into my daily life” the experiences during the meditation. I shared my moment with Thay with my Wake Up [Bangkok] Sangha when I came back to Thailand after the 21-Day Retreat that I loved the look in Thay’s eyes so much; it was so powerful with true understanding, endless love, and compassion.

Thanks to our eyesight, they are a reflection of great transformation from suffering and true understanding arises.

On Sunday 17 July, 2016, the Thai Plum Village volunteer team organized an activity to serve teenage boys in the juvenile detention home, where we spent one full day with 10 young boys who caused troubles in the house and were separated from the large group. This activity enabled me to have a chance to listen to the boys about what they felt in their hearts. It also gave them the opportunity to listen to one another, so that they could understand their friends’ feelings and help each other to stay there happier. We split into smaller groups for each activity throughout the day and sat so that we could see each other’s faces. At the end of the day, we came together in one big circle. After many hours had passed, we gained more and more trust from them. At this point, I had direct eye contact with one of the boys.

I knew in that moment I was looking at the boy deeply with Thay’s eyes in my own way.

In the boy’s eyes, I felt Thay’ eyes, too; that Thay’s eyes also present in his eyes and that part of the look in his eyes was also the look in Thay’ eyes I saw after I prostrated to him. Suddenly I knew in that moment I was looking at him deeply with Thay’s eyes in my own way. I understood now how to “bring it into my daily life.” Afterwards, I shared with the volunteer group that I also wanted to listen to my younger brother at home, too, about what he had in his mind right now. I did do that when I got home later that day; I asked how he was feeling with his current life changes, and I listened to him deeply with my presence. I wish to continue the practice of looking at all beings with the eye of compassion and listen deeply with all my presence.