Home Europe The Netherlands Meditating For the Benefit of Another 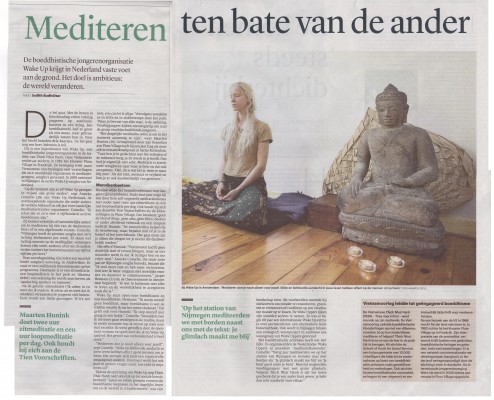 The bell rings. With legs in lotus posture, twenty young people are sitting on meditation cushions in a circle. A Buddha statue, half the size of a man, brotherly sits between them. In front of the statue three candles are burning. The bell rings again. Everyone is silent.

This is a gathering of Wake Up, a Buddhist youth organization in the tradition of Thich Nhat Hanh. In 1982, the Vietnamese Zen teacher founded the monastery Plum Village in France.  Next to Vietnamese refugees, the movement attracts many Westerners who organize themselves in worldwide meditation groups, so-called sanghas. In 2009 the first Dutch Wake Up sangha was established in Nijmegen.

“At this moment, there are eleven Wake Up groups in almost all major cities,” says Anneke Comello (26) from Wake Up Netherlands, the umbrella organization that maintains the website and organizes two national meditation retreats per year. Anneke: “I estimate there are about four to five hundred active practitioners.”

They meet weekly or fortnightly to meditate at the home of one of the participants or in a rented space. Comello: “Nijmegen has the largest sangha with twenty participants per week. There are eighty people on the mailing list; some join weekly, others occasionally. In other cities, the number of visitors varies from five to fifteen at a time.”

This Saturday afternoon, members of various sanghas are present in Amsterdam. In the program, there is a traditional tea ceremony. There is also a sitting meditation, a walking meditation in the park and ‘dharma sharing’. Dharma sharing is an exercise that is described as ‘speaking and listening with awareness’.

After the guided sitting meditation (“Breathing in, I know I am breathing in. Breathing out, I know I am breathing out.”) the youngsters gather outside. First a song is sung: “If it’s not love, you can let it all go.” Then they walk in silence and in snail’s pace through the park. The exercise is to be aware of every step. Curious passersby look at the group of young people shuffling past.

“With these meditations you practice to be present in the moment,” explains Maarten Hunink (30). Inspired by his visits to Plum Village, he lives one year as a monk in an anti-squat house in the center of Rotterdam. “Often you are preoccupied with the past or the future: you’re always inside your head. Then you actually don’t live for real. Meditation is always returning to where you are and accepting: ‘Okay, this is what it is, just be happy with it.’ If successful, freedom is created and you can really enjoy it.”

Hunink wished to try the monkhood for a longer period of time. Since the end of June, he follows a meditation schedule, designed by himself, which includes two hours of sitting meditation and one hour of walking meditation per day. He also adheres to the same ‘Ten Precepts” as the monks in Plum Village. This means: no alcohol or drugs, no sex, no movies, books or other distracting entertainment and a simple lifestyle. Hunink: “The rules are very useful for the practice, but they don’t determine whether you end up in heaven or hell. It’s important that you only make yours those things that actually feed you.”

The effect? Hunink: “Beforehand, I had no clear purpose or expectations, but after four months I’ve noticed that I’m calmer and feel more free.” Anneke Comello, who visits the Nijmegen sangha since two years, agrees: “I feel more calm and have more confidence. I learn how to deal with difficult emotions and to communicate about them.” Jasper Hermans (21) who guides the tea ceremony in Amsterdam: “I learn to live in harmony with everything and to accept what really is.”

Wake Up is open to Buddhists and non-Buddhists. Hermans: “I do not call myself a Buddhist, but Buddhism is the tradition in which I feel most at home.” The same holds for Hunink: “I do not like to put a label on myself.” Comello: “By now I’ve deepened my knowledge of the tradition, but at first I was mainly looking for peace and quiet. I was struck by the openness, warmth and playfulness I found at Wake Up. The sense of belonging is very strong.”

“You never meditate for yourself only, ” Comello adds. “Silence and loving kindness in your life directly affect the people around you. It translates into a respectful relationship with others. In addition, it helps to answer big questions such as: how do I structure my life?”

During the establishment of Wake Up, Thich Nhat Hanh emphatically called for social engagement: “Let’s form local groups that apply Buddhism in daily life in order to transform the world” was his message back then. As examples, he mentioned initiatives to consume less, to cultivate vegetables, or resolve conflicts in a peaceful way.

The Wake Uppers seem to take his words seriously. Last year there was an international Wake Up retreat about permaculture, an alternative farming method. In Nijmegen, Wake Uppers form a commune within an ecological residential project under construction.

Buddhist activism has a sweet touch. The Dutch Wake Uppers organized several ‘meditation flashmobs’. Comello: “Last year we meditated at the railway station of Nijmegen and stood there with signs like: ‘Your smile makes me happy ‘ and ‘You’re fine as you are.’ Usually the passers-by responded with a big smile. According to Thich Nhat Hanh, this is the best gift you can give: at these moments you really pay attention to each other.”

This article was originally published (in Dutch) in Trouw Newspaper, 3 November 2014.