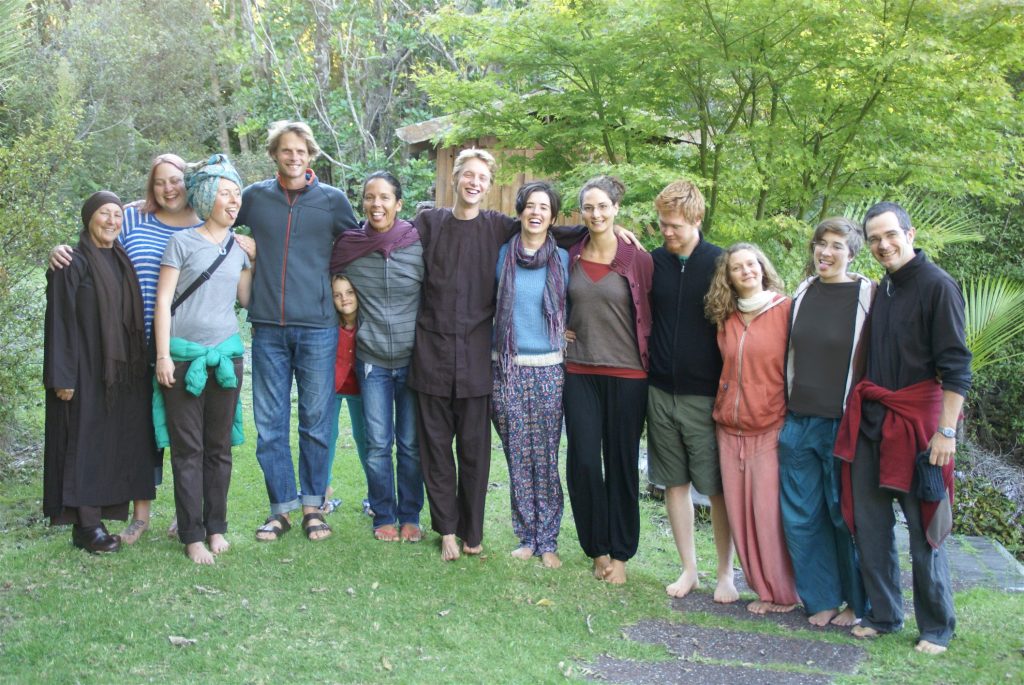 For many years an aspiration has been growing among young people to live in or build a lay community in the Plum Village tradition. During the 21-day retreat in Plum Village in 2014, a small group of us decided the time had come to build a small seedling community within an existing practice center, with the intention of learning more about community life and investigating sustainable and wholesome livelihood. We would more firmly nourish the seeds for future communities – either together or in our home countries – which were already sprouting in our consciousnesses.

We made the decision to commit to a 3 month period in Dharma Gaia in New Zealand – a small practice center established by Sister Shalom 15 years ago – where we would be able to learn from the experience of the existing community guardians, and receive mentoring and guidance from the two resident Dharma teachers. At the same time, we would offer our presence, practice, and skills to the resident Sangha in a hands-on way, working to maintain and extend the center. Our initial group of 4 grew more than expected over the months, and at the end of December we started out as a group of 9 practitioners from all over the world – the Young Bamboo Community.

I remember sitting in Plum Village, as if it were yesterday, sharing together about our dreams for this project and how clear our ideas seemed about how a community would manifest within the structure of Dharma Gaia. I remember how clearly I saw the way that our time in Dharma Gaia would develop: the ways we would work together on projects; how we would share the practice in the wider community connecting with local schools and New Zealand Sanghas; how we would share about and nourish our aspirations about community life; and how we would work towards manifesting a community once our time in Dharma Gaia was complete.

Daily life in the community was quite different than I had in my mind’s eye. The daily structure and perceived lack of freedom became suffocating for me. With many work periods spent in the garden weeding and tidying up, and hours spent digging without seeming to create anything, I began to wonder what I was doing here. Why was I spending 3 months living here in this community in this way? Is this not the same world that I had left in the Netherlands, where I was working in a job that did not allow space or freedom to express my creativity?

Looking back, I see I was becoming increasingly critical of the structure and of others. Everything seemed ‘off’. There seemed to be a heavy air within the community spaces, which would evaporate the moment I walked out of the gate into the neighboring paddock. I was distancing myself from my friends in the community. Wherever I looked I saw demons and difficulties. And these difficulties were spilling over into my relationship with my partner, where we seemed only to reinforce each others’ uncertainties in a downward vicious spiral. “It must be the centre that is at fault! The practice isn’t right. The food isn’t right. The sleeping arrangements make life hard.” I was struggling in a dark place, and was unable to reach out for help. With this building up, I decided to take a few days away to try to find some balance in myself again.

It was a strange thing to leave the community – to take some time alone to try to rediscover the connection with myself and, from there, the group – but time alone helped me to gain a different perspective. I learned the nourishment that I can find in solitude, and the necessity of some ‘alone time’. I felt the air lighten around me and found my strength and solidity returning. 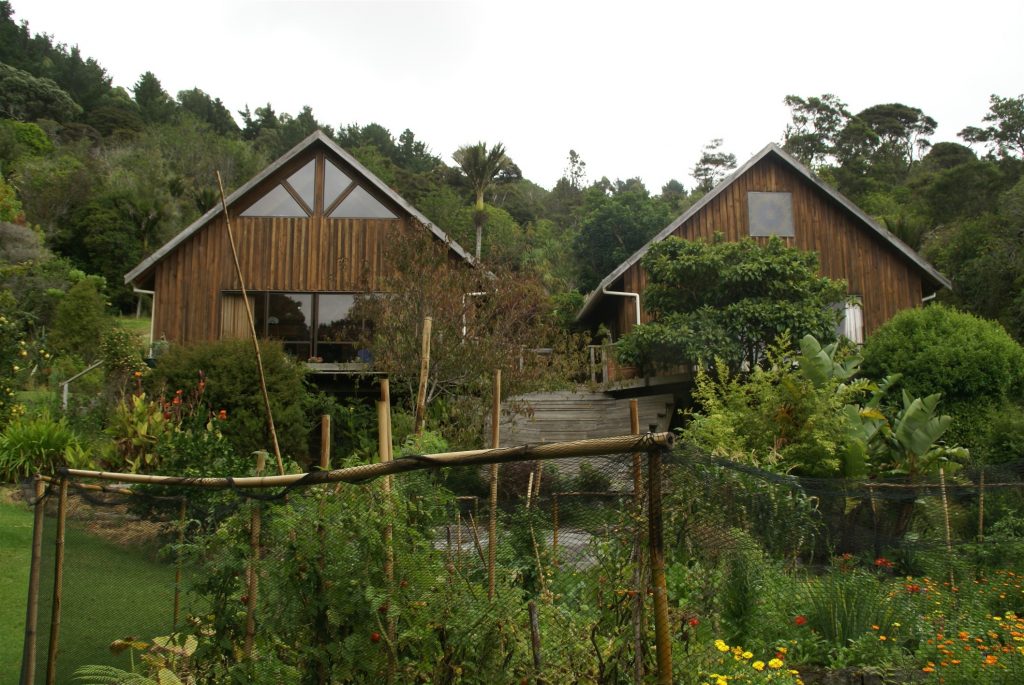 I also began to see that I was holding on too tightly to an idea of what the practice, or rather how a ‘good practitioner’, should be. I had stopped doing many things that brought me joy – including reading novels and watching movies – especially where they could be deemed ‘inappropriate’ to the practice. I came to realize that I needed to remain true to ‘myself’, whilst incorporating the practice into that which already was inside of me. My time away also created the space for me to see some of the difficulties I was having. I could see the blocks that I was running into, although the blocks still remained outside of me.

Returning from the city felt like returning home. However, the difficulties I perceived as ‘in the community’ remained – as did the difficulties in my relationship. As the distance seemed to grow between my partner and me, some old pain from my childhood resurfaced. There were still parts inside that needed to heal in order for me to be truly present for either my partner or the community. The difficulties came to a head on the last evening of the February mindfulness weekend, where I experienced the first (and hopefully last) true panic attack in my life.

This moment turned out to be a turning point. Reaching the bottom showed me in no uncertain terms the love that was in the community. Despite the distance I had created, and my sometimes childish lack of co-operation, the entire community supported me in whatever way they could. The inner child, who had spent so many years feeling so isolated and so alone, could finally let go of his need for certainty, and just be with what there was. He was home, and he was safe. I could lay to rest the fear that has so often crippled me throughout my life.

As we set off, a few days later, for a week at the beach together – to vision on our future and to just enjoy the company of friends – I felt more stable, and could begin to open up to the community again. The perceived distance between my partner and I also began to lessen as I became stronger and more centered. Following a workshop that some of us attended at a festival during our away trip, I was finally able to let the inner child take his rightful place in my life and allow the man to step forward to be present. If the panic attack was truly defining, this workshop was truly liberating and embodying. I could finally let go of the trauma from my past and become whole again. I feel like I am now truly present for myself, for my partner, and the community, although it is still a learning process.

As I opened more to the community in the last weeks, I began to let go of many of my preconceptions about life, about love, about friendship and about community – which had been holding me back from being truly present. I began to learn about the true nature of intimacy – that healthy expression of love that is not limited to couples; that does not ask but gives; that respects boundaries, even during physical contact. I could learn about relationship – that space and distance are not necessarily the same; that closeness is not love; that (even intimate) nourishment cannot always be sought from only one source. And I began to open the door to brotherhood – although not easy for me.

In the last days before leaving we created a banana grove in the hollow, which we were slowly filling with the earth we had been digging out; we laid the foundation for the shed in the space we had been preparing; and the gardens and center looked neat and tidy. I can see the fruits of all our labors, even though they often seemed so pointless at the time.

Slowly, a focus has been returning to my life – that aspiration to create healthy, sustainable, and nourishing communities, gardens and ecosystems; that aspiration to live in the world and to work towards a healthy future for all. I feel the desire not only to practice for myself, but to share this practice with others.

If you’d like to practice with the community at Dharma Gaia and apply for a mindfulness internship from October 2015 to June 2016, click here.