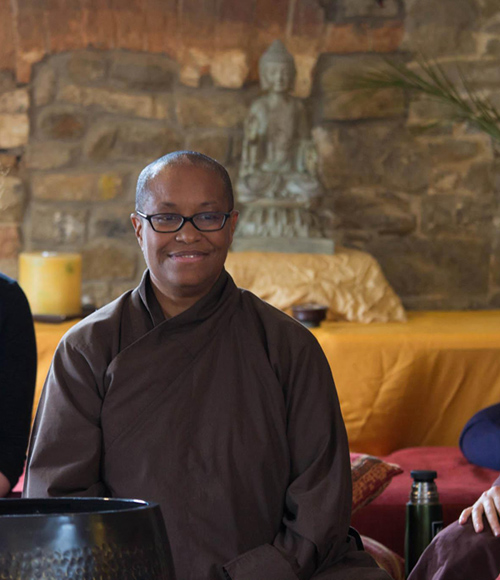 If you have ever been to Plum Village, you will surely have noticed Sister Peace’s welcoming and gentle presence. Her warm voice and “young at heart” African American energy have been supporting the community for years. She has also been with Wake Up since the very beginning. Reasons aplenty for the Wake Up website, to get a little more acquainted and get a deep look deep into her wonderful personality.

Can you describe the journey that led you to becoming a monastic?
I suppose the journey started long ago, though I did not know it at the time. As often is the case, you are not really sure where you are going until you arrive. My last incarnation, in terms of work, was working as an executive officer for the mayor in the District of Columbia. It was a wonderful experience, but after a while the politics got really rough.

At the same time, I was on a spiritual path. I was born and raised Catholic, but that did not seem to satisfy. Very early in life I began looking into other spiritualities and philosophies, or New Age as it was called back then. And Buddhism always was an attraction to me.

When I went to work for the mayor’s office, I just dove right in. I was so happy to be able to work for the community. But then I realized I had lost contact with spirituality. So I went on the web and searched for “Buddhism Washington D.C.” and I found the Washington Mindfulness Community and started to practice there. I realize I was very lucky because it is one of the most mature communities in our tradition, rich with Dharma Teachers and three practice centres.

When I heard Thay was going to offer a retreat on mindful politics for Congress, I offered to help a hand in the preparation. And not only Thay came to the retreat, but also the Dalai Lama was there. So there I was, up close and personal, even though I only just dove into the community. And that was my first impression with Thay and the monastic Sangha. It was really extraordinary.

One year later I went to the first Colours of Compassion retreat, the first retreat for people with colour in our tradition, and I also went to Vietnam when Thay went back for the first time. That was life changing.

When I found out that lay friends could actually live in the community, I started to consider that because I realised I was happiest when I was with the Sangha, doing Sangha things. I was not attached to working politics. I would be happy working in a bookstore if I could just be near the Sangha. So considering this, I started mentally giving up where I lived—the car, the clothes, the shoes, and so on. When I realized I could do it, it did not take much time at all for me to pack my bags and head off to Deer Park.

I lived there for half a year and started thinking about being a monastic. The Deer Park monastics told me to come to Plum Village, and so I did. Now I have been a monastic for almost six years.

What is the most important thing you have learned?
Probably patience. Usually when someone says something you want to react to, you do it right away. But here you wait and think first: “Maybe that brother or sister did not quite mean what they said the way they said it? What did it touch in me? How can I best respond?”

When I do something, there is often some sort of resistance behind it. And when you feel resistant, that is when fear, anger and suffering come up. I do not mean to say that resistance is bad. It is just telling us something. So you have to look deeply at it and try and understand why it is there, instead of turning away from it and forcing things.

Has your engagement with Plum Village impacted your family?
Yes, quite a bit. They supported me even though they did not quite understand it at first, and I feel very grateful for that. I think I have also been able to bring tools of the practice to them without calling them that, but just in the way I communicate with them and help them communicate with each other, especially with regards to my dad. He is Thay’s age and is in an assistant living place right now. He is as happy as can be, but still, his situation has been a challenge for some of my family members. So I try to help them accept it and not to resist it.

What’s your biggest dream for your practice and for the community?
Just to continue, to continue to have the conditions that I can be a monastic and that the Sangha can grow. And from there everything else springs, like having a chance to go on Wake Up tours and help with Wake Up schools and all other things that I could help the Sangha with.

Just being able to be here in this environment, in the community of not just monastics, but also of lay practitioners because they are just as important. I have been nourished a lot by their practice and their challenges because I have lived long enough as a lay person to understand exactly what those challenges are.

If we could just continue all that, as has been the case for almost 2600 years, I would consider us all lucky.

How did you get involved with Wake Up and Wake Up Schools?
I was part of Wake Up from the very beginning stages, and also soon after that of Wake Up schools, or Applied Ethics as it was called back then. I wanted to support Wake Up because I consider myself young at heart, and have young nieces and nephews. It was important that we offered them something as an alternative.

As to Wake Up Schools, my mother was a teacher and so were my uncle and my aunt. In fact, in my parents’ generation, being a teacher was one of the few professional things that African Americans could do. I also was lucky that my parents worked hard so they could send me to private school. So I knew the importance of good education.

I knew good education is not dependent upon the reputation or wealth of a school. A good school is somewhere the teacher can embody wholesomeness himself or herself. If we can help teachers to find peace in their own life, then they can share that with their students and maybe even with their students’ parents. So my involvement in Wake Up Schools came naturally from my background in education and knowing the benefits of the practice.

What’s your biggest dream for Wake Up?
That it continues to grow. I think the young people are very hungry for an alternative. I think we can continue to attract young people and monastics to take this message out. One of the things that attracted me to this tradition was the fact that we were so engaged. People always say: “It’s easy to practice here in Plum Village, but what about when I get home?” So we come to their home and we show them how it works there.

How would you describe Wake Up to someone who has never heard of mindfulness before?
I would say it is just an alternative lifestyle, that’s it. (smiles) 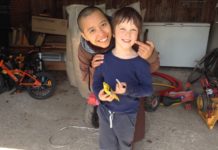 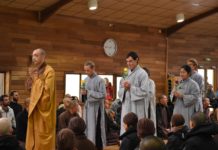