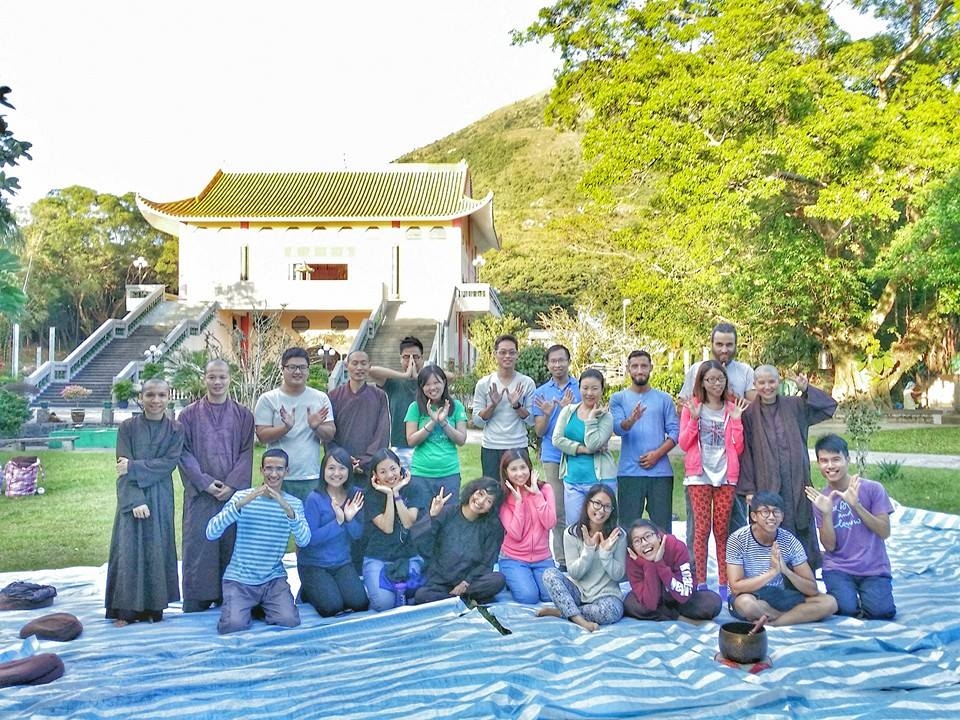 Plum Village Hong Kong (PVHK) is a mindfulness community practice centre established by Zen Master Thich Nhat Hanh and the Plum Village Monastic Sangha. Its aim is to serve as a base for learning mindful living and integrating the Dharma in our daily lives. When the International Youth Retreat in Plum Village, France finished on 4th July 2008, several young Plum Village core Sangha members offered their youth presence regularly in bi-weekly practices and quarterly retreats where they kept good connections with a number of young practitioners. In July 2011, when PVHK moved to Lotus Pond Temple in Ngong Ping, Lantau, young monastics such as Sister Hanh Nghiem (Sr. Action), Sister Mai Nghiem (Sr. Plum Blossom), Sister Sinh Nghiem (Sr. Liveliness), and Brother Phap Chung (Br. Dharma Realization) and a number of young friends organized the annual youth retreat, monthly Wake Up Sunday Day of Mindfulness, and in-town gatherings.  Six months ago, I participated in the youth practice workshop named “Green Plum” where new formats were tried and I had a great time practicing with the organizers and participants.

The pressure faced by young people is no lesser than the grown ups’. In these last few years, there have been many cases of students committing suicide.

Green Plum Manifested From a One-Pointed Mind
The idea of “Green Plum” was not a new one, as it had taken about a year from its conception to implementation. Lok, one of the organizers, recalled, “We have learned from each other. Since March 2012 we started gathering at the City University of Hong Kong. Then in April 2013, we began our bi-weekly gathering in the busy flower market of Prince Edward to practice with Plum Village friends. As time went, we noticed that the young practitioners did not stay to continue practicing with the Sangha. The annual Wake Up retreat, held in January, can attract a group of young people who are passionate to practice mindfulness. However, their passion faded away after the retreat. Although we have matured over the past four years, we still could not gather new friends to stay with us. This is quite alarming, and we think that perhaps it was time to seriously organize a group of young practitioners.” With this thought in mind, different ideas arose gradually and core members started to brainstorm how to attract young people to enter the Dharma door.

The pressure faced by young people is no lesser than the grown ups’. In these last few years, there have been many cases of students committing suicide – an indication that youngsters are also under a lot of pressure from life. Learning about mindful living provides young people some space in which they can learn to communicate with themselves and become more resilient. Whenever young people encounter problems with their studies, relationships and family, they prefer to share with peers of similar age, and as such it is crucial to provide a platform to allow their feelings to be shared, and their voices to be listened.

In one of the Wake Uppers’ gathering last year, another organizer named Vivien asked the group, “Can we have a practice group for only young people?” She explained, “We are aware of the fact that as young people, we have our own world and that what we value and care about may be different from the older generations.” For example, young people may be concerned more about politics, environmental conservation and romance. Therefore, we aspire to create a practice environment that is suitable for young people, bringing mindfulness to young people’s lives through different means. This tiny thought was what gave rise to the six-month Green Plum monthly practice program, a platform for young people to practice.

Learning Amidst the Difficulties
From its preparation, implementation to completion, Green Plum was no easy task. The problems organizers faced included differences in opinions, lack of manpower and resources. Wake Up members allocated tasks effectively and, as a team, discussed the matters of conflict to prevent them from developing into mental illness due to disagreements of members. Elaborating on that, Lok explained, “We applied the practice into the whole process of organizing the workshops. During our discussions, we helped each other reviewing the areas where we were blinded to in our own practices, like being too attached to certain ideas and the identity and roles we took in the organizing committee. Unknowingly, the group grew up with the progression of Green Plum. “Our understanding of the Dharma has become more solid,” Lok added.

Living It Out Brings Results

If we know how to look after our minds moment to moment, we will develop more capacity to face our difficulties.

As the theme of the first phase of the Green Plum program is “taking care of our mind,” the participants explored their own inner selves during the six months’ span. Very often young people do not have enough life experiences and feel helpless when they face difficulties. They learn more about themselves through activities like games and role plays. Vivien said, “The pressure faced by young people comes from their inability to take care of their minds. If we know how to look after our minds moment to moment, we will develop more capacity to face our difficulties.”

And so the workshops, which lasted for six months, started. There were sessions of sitting meditation, total relaxation, exercises, touching the earth and singing to let participants understand their minds through their body, feelings, perceptions and objects of mind (more formally known as the Four Establishments of Mindfulness—body, feelings, mind, and objects of mind). Probably because of their similar ages, the participants were very willing to share their doubts of their practices and lives. Though we have known each other for a few months, the trust we had for one another had developed rather quickly.  This is exactly the qualities Lok and Vivien had wanted for the group to develop: deep listening and mutual trust amongst the participants. 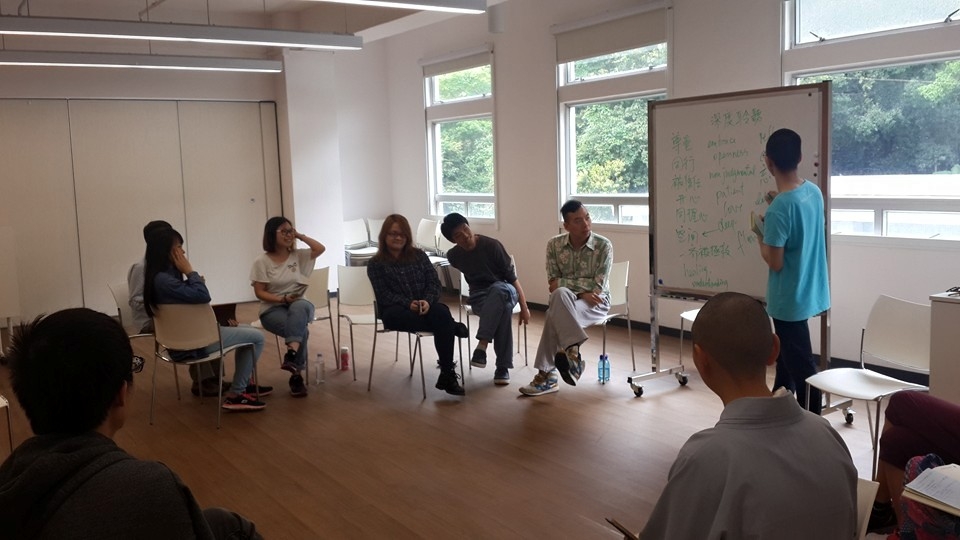 Green Plum workshops are not limited to sitting meditation, chanting and prostrations; it also incorporates other elements or principles that are worthy of learning. Lok and Vivien explained that half a year ago, Barbara Esher, a member of Plum Village Core Community of Interbeing, hosted a non-violent communication (NVC) workshop in Hong Kong. Lok and Vivien were aware of the similarities between NVC and mindfulness, and how they were able to help deepen the skills of loving speech and deep listening. Green Plum enabled creativity, as well as consolidated what they have learned in their daily practice.

As a result of the outcome, ‘The Communication of Love’ workshop was organized as part of the Green Plum program to teach some skills on how to connect with friends and deepen communications, such as mindfully being aware of the feelings and the needs of others. Following that, there was a ‘mindful yoga’ workshop. Through the harmony of bodily movements and mindful breathing, participants can experience the state of mindfulness and concentration when the mind and body are one.

When my friends spoke unkind words to me, I tried to be aware of my feelings and needs at that moment and told the other person frankly about my feelings.

Through this program, participants discovered that the practice is not limited to silent sitting, but that every moment in life allows us to understand ourselves. So we are all aware that the practice is not limited to the 3-hour practice session every month, but that it’s happening every moment. Mandy, a fellow participant said, ‘On this path of practice, there is a group of people with the same aspiration. I would like to thank Vivien, Lok and other Sangha members for turning their ideas into action. In our reflection and practice, they used fresh and creative activities that resemble the sorts of activities we do in our daily lives. As we are of similar age, we can discuss questions related to our practice. The part that impacted me the most was the NVC workshop and the subsequent practice sessions which helped to incorporate the Dharma into my daily life from a completely new perspective.

For the first time, I felt more solid about the Buddha’s teaching of loving speech and how to apply it effectively in my daily life. For example, when my friends spoke unkind words to me and were being judgmental to me, I tried to be aware of my feelings and needs at that moment and told the other person frankly about my feelings and needs to avoid any misunderstanding. Christy, a participant agreed, “Last week I saw my hall mates having conflicts because of some trivial matters. I remembered what I had learned in the workshop and tried to understand their needs and feelings, rather than handling the matter directly. I am very satisfied with the results.”

The Green Plum Grows into a Tree 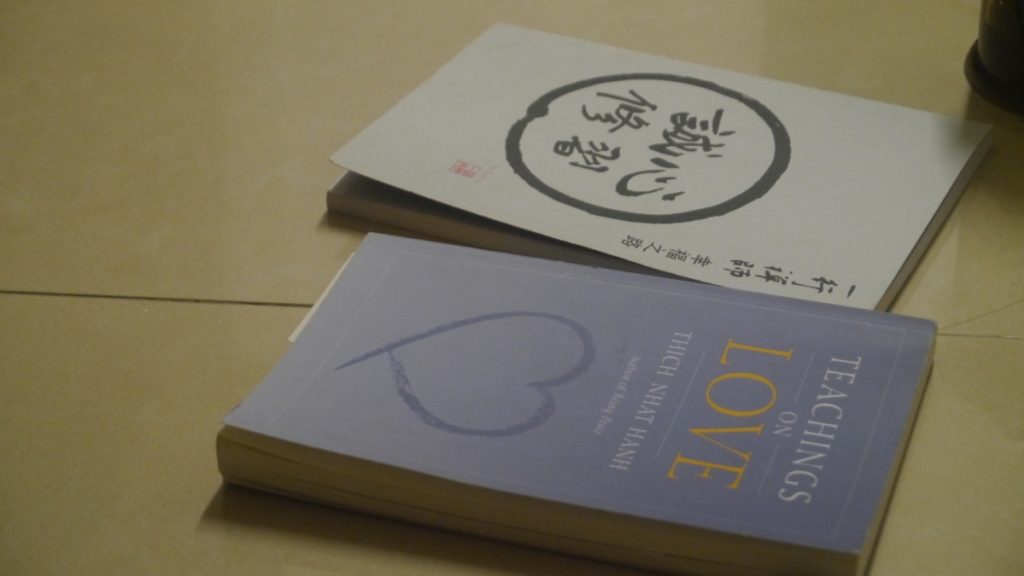 Every seed wishes to mature into a tree. I consider that Green Plum is effective in gathering young practitioners. Being able to nurture young people is invaluable because they will be the sower of the next Green Plum. Talking about the future of Green Plum, Lok said, “Only less than half of the participants stayed till the end, but we are not disappointed because we know that only when more young people come and practice, then there will be more conditions [seeds] to plant more Green Plum trees. We have a lot of activities in mind, such as movies, books, images, and music that are different modes of expression which are yet to be explored. We hope that the next Green Plum tree will manifest in a more brilliant and energetic way.” I believe that future participants of Green Plum will join more activities organised by Plum Village Hong Kong and gradually become sowers themselves.

The path of practice has never been smooth. Young people need a platform where they can encourage one another, explore, and discuss the successes and failures in their daily lives and practices. This is truly bringing the Dharma into one’s daily life.

This article was originally published in Chinese on buddhistdoor.org