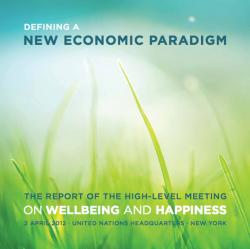 “Last year, in the month of July, 68 nations joined Bhutan in cosponsoring the United Nations General Assembly resolution on happiness, which was adopted by consensus by the 193-member United Nations. The idea is, if you think of well-being in terms of Gross Domestic Product, it is very important to reconsider this. You have to create a kind of science called ‘science of happiness.’ The UN has commissioned a research on happiness. Instead of talking about Gross Domestic Product, you can talk about Gross National Happiness.

The resolution on happiness stated that Gross Domestic Product alone is not an adequate measure of human prosperity and that a more inclusive, equitable and balanced approach is needed to promote sustainability, eradicate poverty and enhance well-being. A report commissioned by the UN conference shows how a new science of happiness is able to measure people’s well-being, which is called the World Happiness Report.

Two months ago, on the 2nd of April, there was another meeting at the headquarters of the UN convened by the Prime Minister of Bhutan, a Mahayana Buddhist country in the Himalaya. 68 governments were present and they discussed the theme “Happiness and Well-being – Defining A New Economic Paradigm.” It was a high-level UN meeting on happiness, marking a significant step towards the government’s placing well-being at the right place, well-being at the heart of economic progress.

Even if you have a lot of money and power but you still have pain, you can suffer very deeply. We have seen people who have plenty of power, fame and wealth, but they commit suicide. The science of happiness has to do with the science of suffering, because we have learnt that there is a very strong connection between suffering and happiness. In Buddhism suffering, ill-being is considered to be a holy truth. You may like to ask what is so holy about suffering. The fact is that if you do not look into that holy truth, you cannot see how happiness could be created. So a deep understanding of suffering, of ill-being helps you understand how to create true happiness., Mindfulness and concentration can give birth to joy and happiness. Thus the Buddhist practice can be described as the practice of happiness.”

– Excerpt from Thay’s Dharma Talk, The Science of The Buddha Retreat, 3rd of June 2012

“Our Dharma Teachers have begun to implement the practice of mindfulness in many schools. They have been able to train school teachers in order to bring this kind of practice into the classroom and the result has been very encouraging. Young people can learn and practice. They do not need to believe in the existence of the Buddha in order to do that. They learn how to:

– bring the mind back to the body by the way of mindful breathing.
– release the tension in their body in order to have ease and peace.
– handle a painful feeling, a strong emotion.
– produce a joyful feeling, a happy feeling.
– listen to the other person with compassion.
– express themselves in the language of non-blaming, practice loving speech.
– restore communication with their parents and friends.

This can be taught to young people, and we need school teachers capable of doing that for themselves in order to offer this practice in schools.

One of our Dharma Teachers, Ha Vinh Tho, is now in Bhutan. He has been invited by the prime minister to come and help Bhutan foster mindfulness-based education, bringing these kinds of practices into schools. Many of our monastic and lay Dharma Teachers want to join him and help train a national community of school teachers in order for them to be capable of doing it for themselves first. We should train the trainers, so the trainers can go train all the school teachers in the country.

When we met the governor Jerry Brown in California, we also talked to him about that. He said that we can start with a few schools in California. After having demonstrated the effectiveness of the practice, it will be easier to convince other schools to follow. We need many helping hands to bring this kind of practice into schools to help young people suffer less, to help teachers suffer less. Because if the students suffer less, the teachers will suffer less.

This is a project of our Sangha, please join us. We need Sangha members to help the Sangha.”

– Excerpt from Thay’s Dharma Talk, The Science of The Buddha Retreat, 12th of June 2012

Today we have some wonderful news to share with you.

Monastics from Plum Village and Lay practitioners from around the world, in the tradition of Zen Master Thich Nhat Hanh, have been invited to work with the Gross National Happiness Centre (GNH Centre) in Bhutan to create “Mindfulness Is A Source of Happiness” workshops and programming for educators, youth and nuns during a tour of Bhutan in September of 2012. During the tour, workshops and activities will be offered free of charge, with the monastic and lay friends donating all of their time and energy.

This opportunity will allow for a symbiotic relationship to be developed between Plum Village’s recent work in the field of mindfulness and education and the Bhutanese initiative of Gross National Happiness. Both Plum Village and the GNH Centre share the common aspiration of creating living and learning communities that result in profound personal and societal innovation and transformation. This tour will provide an opportunity for an exchange of knowledge, supporting the growth and capacity of the GNH centre. 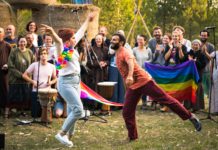 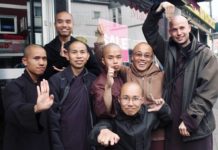 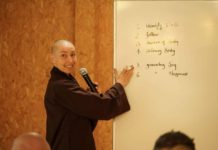 The Bodhisattva Ready to Laugh, Ready to Cry