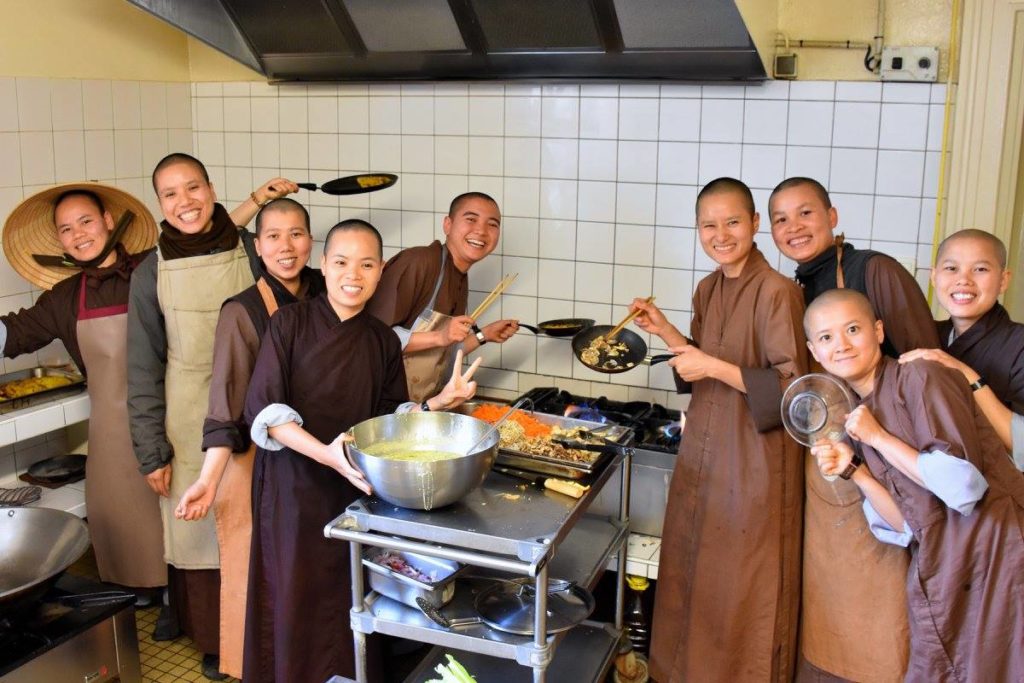 Every time we think of you, feelings of immense gratitude well up. Thank you Thầy for teaching us to breathe, walk, smile, and handle our emotions so that we don’t utter words that we later regret. Thank you Thầy for creating such a wholesome environment for us to practice in. We, as your monastic and lay students, are all contributing our energy to your career of building Sangha.

Thầy, you have often taught us to see that the kitchen is also a meditation hall, and we are practicing that with a lot of joy. We practice to use loving speech when we cook together so that we can infuse wholesome energy into the food that we are preparing. While sitting and resting one day, a few sisters and I had a conversation that went something like this:

“Dear sisters, why don’t we organize a cooking retreat?”

“But our kitchen is too small, and we can’t do a cooking demonstration in the kitchen.”

“So, why don’t we bring the kitchen into the meditation hall!”

We all burst out laughing at the quirky idea. Another sister said, “Thầy has said that the kitchen is also a meditation hall, so now we can make the meditation hall also a kitchen. I’m sure Thầy will be okay with this adaptable idea, right Thầy?” 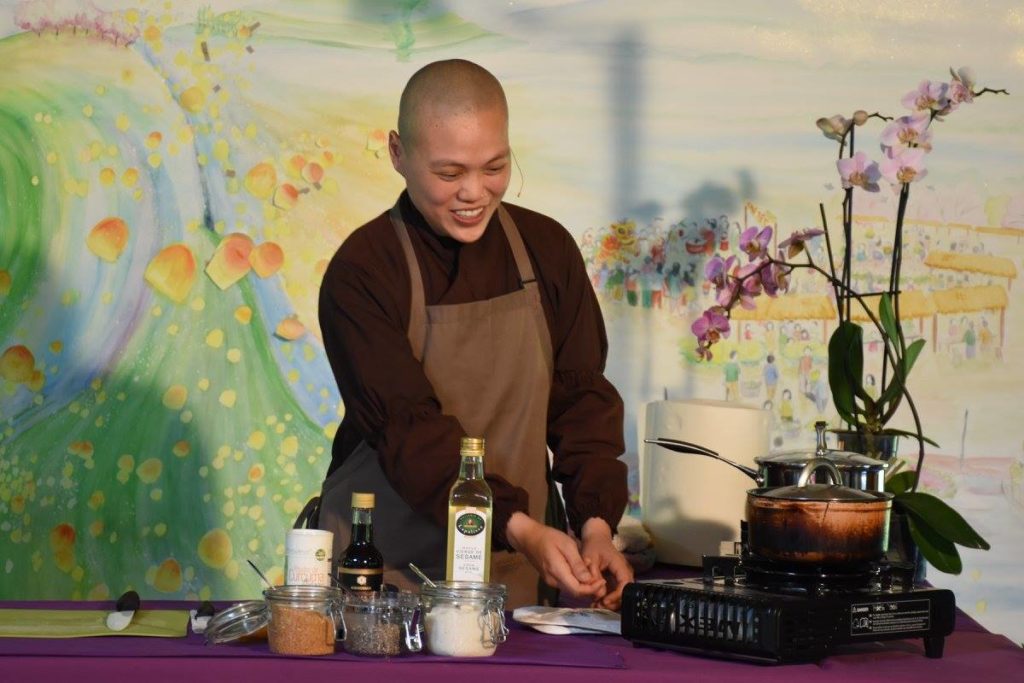 Last year, in 2016, we had our first cooking retreat, and it was rather like a test run with glitches here and there. When it ended, we sat down together to reflect on the points that could be improved upon, so that we could do better next year. That is why this year, our cooking retreat has been a great success, and everyone is so happy. The cooking presentations took the retreatants on a delicious tour of Vietnam with a signature dish from each of the three regions: aubergine stew in the North, sizzling pancakes in the Central, and hủ tiếu noodle soup of Southern Vietnam.

Dear Thầy, I recognize one advantage of living in the Sangha, and that is I get to learn so much from others. The aubergine stew was carefully and beautifully presented by Sister Đàn Nghiêm. This dish is relatively simple and easy to cook, but the secret to making scrumptious food that she shared with our friends is the energy of peace and love that we can generate while cutting the vegetable and cooking them. With these “special ingredients” our dish will taste so much better.

As stew is normally eaten with rice, Sister Đàn Nghiêm served some rice and presented the dish attractively, then she asked for a few volunteers to do a quality check. Immediately a load of hands flew up, and a few were invited up to have a taste test. They were all very happy indeed!

It was a cooking retreat and we were very happy to see so many male retreatants. Some came on their own, while others attended with their partners or wives. They not only learnt how to cook, but also how to nourish happiness in their families. In my Dharma sharing group there was a French couple. The man had a Vietnamese mother and wanted to learn a few Vietnamese dishes so that he could cook for his mother and his family to enjoy. They were both so happy. I believe they were already doing well in their family, but after attending the retreat their happiness was enhanced many folds.

Dear Thầy, there was another wonderful transformation during this retreat. A young woman shared that before she came to Plum Village she was smoking over 20 cigarettes per day. However, when she came to practice and got in touch with the peace, freshness, and joy of the Sangha, she was able to stop smoking. Everyone in the Dharma sharing group was very moved by her sharing as she promised to maintain her practice to stop smoking. 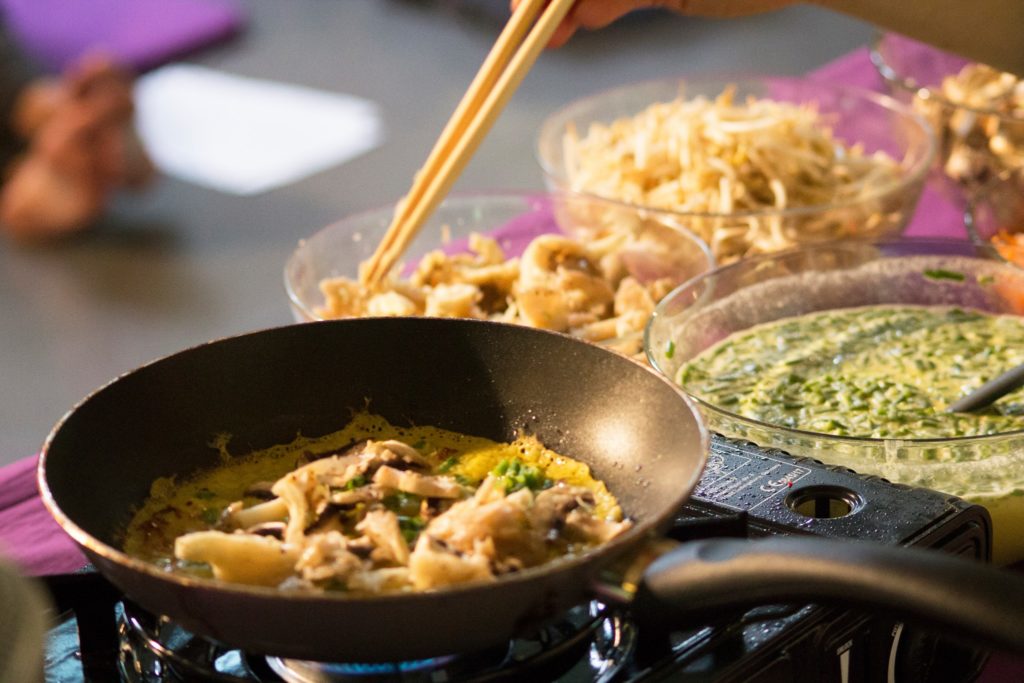 On the fifth day of the retreat, we all took a trip to Central Vietnam and tasted sizzling pancakes made by Sister Hào Nghiêm. Dear Thầy, I know you enjoy eating Vietnamese pancakes, and just hearing the name can make one’s mouth start to water! When Sister Hào Nghiêm began to fry the leek, the aroma filled the air and really turned the meditation hall into a kitchen. Next, she poured the golden batter into the frying pan making a fantastic sizzling sound, in Vietnamese “xèo”. This is how sizzling pancake got its name in Vietnamese bánh xèo, which literally means sizzling cake. The retreatants were beginning to get hungry, and watched with their mouths dropping as she flipped the pancake by tossing it up into the air, and caught it in the frying pan, without using any utensils! It was as if she was performing some sort of edible acrobatic trick. Flipping the pancake makes it more crispy. I watched her in total admiration because if it were me, the pancake would have landed on the floor. 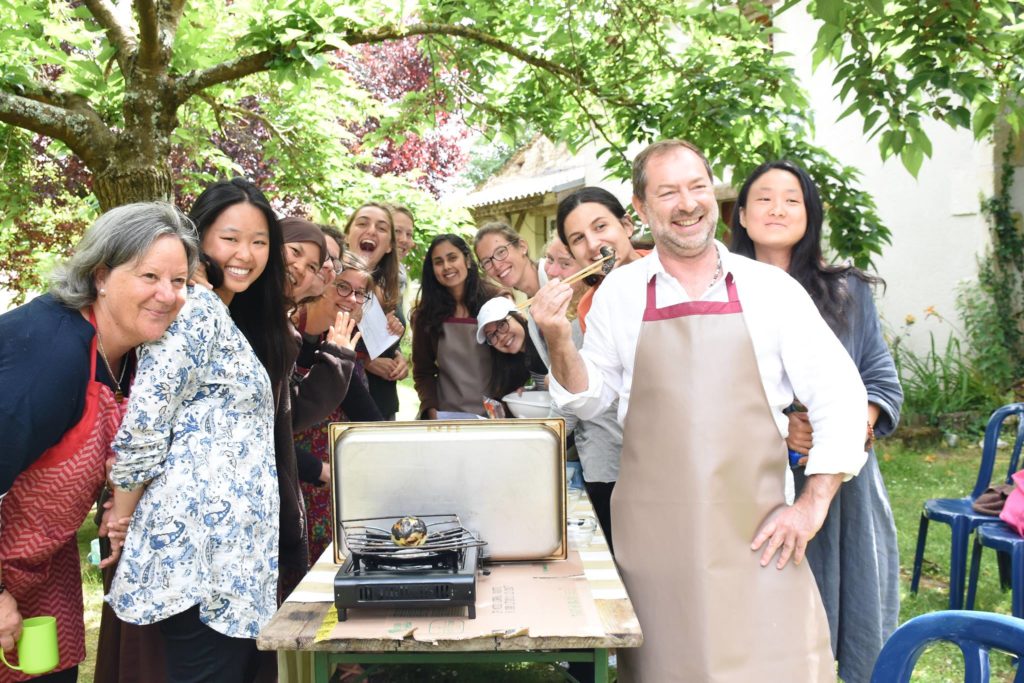 At the same time of the cooking retreat, there was also a business retreat at Upper Hamlet and Lower Hamlet. One female retreatant shared that even though she was a manager of over 1000 employees, she had chosen not to attend the business retreat. However, in a cooking retreat she was glad to have learnt how to manage her emotions, and how to generate moments of joy and peace for herself while listening to a Dharma talk, during sitting and walking meditation, and while eating in mindfulness. And she hopes to share these practices with her employees when she returns home.

As the retreat was drawing to an end, I could feel people opening their hearts a lot more, allowing loving-kindness and compassion to flow freely between each other. Initially, they were strangers to one another, but during the process of being together, practicing day and night together, I witnessed people becoming closer and closer in a natural way. So much that at the end of the retreat, the warm feeling of being a part of a big spiritual family could be felt by everyone.

The last day of the retreat was so joyful, no less than a festival! We were all worried that it might rain, but it did not and only made the day so pleasantly cool. That morning we had a cooking presentation, and in the afternoon there was a cooking contest between the Dharma sharing families. Sister Ước Nghiêm took the Sangha into the south of Vietnam with her dish, hủ tiếu noodle soup. She can make this dish taste scrumptious, and I must learn how to make it so that when I visit my family I will be able to cook it for them to enjoy. My blood family has not yet become vegetarian because their idea of being vegetarian means that they can only eat plain vegetables and tofu. If that were the case day in day out, then it would be such a great bore to be a vegetarian! The day I ordained as a nun, my father was so worried that I would become malnourished because of a vegetarian diet, but time has proven otherwise. At my last home visit, my parents felt very reassured about my health.

Making hủ tiếu noodle soup is not easy, but I was surprised to see that many families wanted to make it for the cooking contest. That day no one wanted to take a midday rest because they were all so enthusiastic to prepare for the afternoon. The organizing team was busy arranging the tables and chairs and all the cooking utensils for each family. This was an opportunity for all the retreatants to exhibit their cooking skills and to implement all the notes that they were so fervently taking during the presentations. And true to the word, everyone successfully put into practice what they had learnt.

There was a writer who came to the retreat four days late. As soon as he arrived he asked what the program was yesterday. He was relieved to know that it was a lazy day, because it meant that he missed one day less of the retreat schedule. His Dharma sharing family had chosen to cook the noodle soup. He took on grilling the onion, while others fried the tofu or made the dipping sauce in such a professional way. Everyone worked so harmoniously together, each with their own part in the cooking process, so that the dish came together with a lot of laughter and happiness for the whole family.

After cooking the dish, each family had to decorate or present it in an attractive way. This was a chance for the collective creativity to shine through, and it certainly did fantastically. It was so difficult for the judges to select the family to receive the first prize. In some families, they even sang some songs as part of the presentation in front of the whole community and the judges. If I were one of the judges, the songs would have melted my heart. The main purpose of the cooking contest was to bring people closer and enrich their friendship. 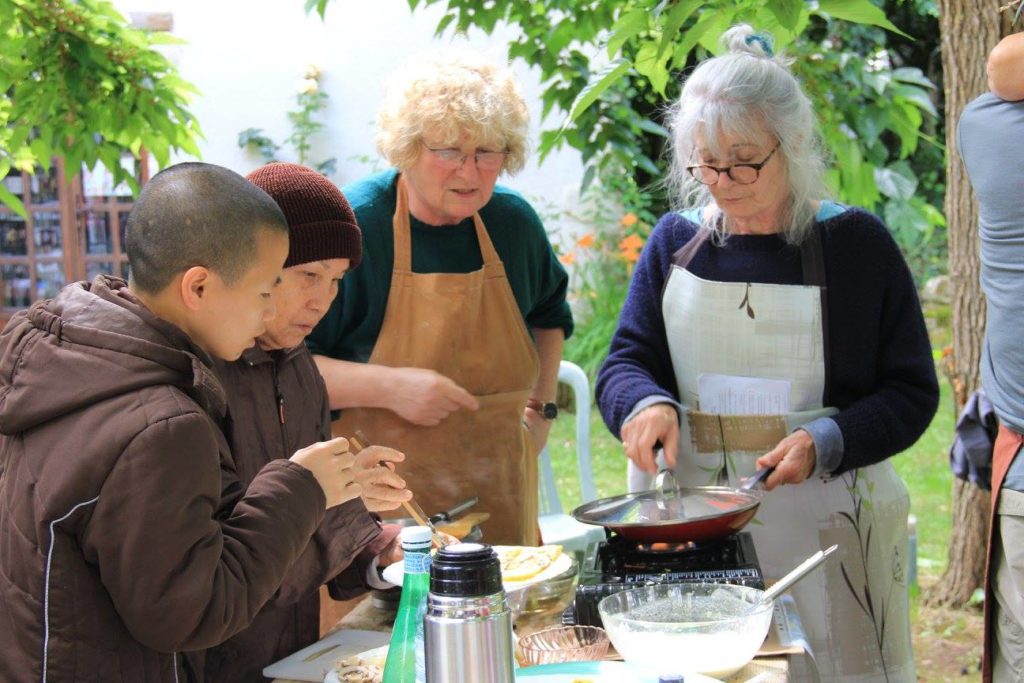 Dear beloved Thầy, through this retreat everyone recognized that there was more to the eye than learning how to cook—cooking is truly an art. The writer I mentioned above shared in the Be-In at the end of the retreat that he was considering a change in career, from a writer to being a chef. I said to myself, “Dear friend, do you know that you can write about the topic cooking and the art of generating happiness?” In that way you can be both a writer as well as a great cook with lots of happiness.

In the ceremony to transmit the Five Mindfulness Trainings, I was yet again pleasantly surprised to see that over 70 people had decided to receive the Five Mindfulness Trainings. It was quite a record and so unexpected for everyone because 70 was about half of the total number of retreatants. People who came to Plum Village not only learnt how to cook delicious and wholesome vegetarian dishes, but they also learnt how to cultivate happiness for themselves and for their families and society. Through a cooking retreat, many retreatants realized that eating a vegetarian diet did not mean one had to sacrifice taste, but that they were also contributing a significant part in the effort to protect Mother Earth.

Dear respected Thầy, every time I witness the transformations in the retreatants, my heart is filled to the brim with gratitude for the Buddha, and to you who have given us such a wonderful and wholesome spiritual path so that we can help relieve the suffering in the world. Perhaps we will organize another cooking retreat in the next year, and I believe that cooking in mindfulness will become a new practice, like a “Dharma door” that can further and deepen engaged Buddhism in the West. When you have finished reading my letter I’m sure it will put a smile on your face. Isn’t that right, Thầy?

With all my love and respect,
Your student, Sister Chuẩn Nghiêm