Q: Your blood family is in France and lives close by. Do you find ways to share the practice with them?

Sister Giác Hòa: My being in Plum Village benefits my family. I’ve discovered I don’t have to do anything. I just have to be.

My parents come to Plum Village because they love me, and they want to be with me and understand what I am doing. They come without any fear or suspicion because I had practiced for many years before I ordained, and they already knew I was spending a lot of time at Plum Village. They came when I attended the Rains Retreat for the first time as a lay practitioner. That year, my brother came to spend some time with me as well. They could feel how happy I was, so that put them at ease.

I practice appreciating my parents and seeing them in me. I appreciate the fact that they gave me many good conditions like an education, a happy childhood, and the opportunity to be in nature. I like many things because of the seeds they planted in me. In many ways, I am in Plum Village because of them. I think they now consider me someone who can listen, so they speak to me about the family or about questions and issues they encounter in life. I can see that my parents and my brother are opening themselves up to share. There is a trust and ease between us as we all continue to grow.

The first time my family came for a Day of Mindfulness, I felt they touched peace because they could feel the peace in the community. My parents did silent walking, and I held their hands.  In the container of the Sangha’s energy, some of the things we had not expressed to each other before could now be expressed by holding hands or by flower watering. It felt like a safe place. When we have the habit of not feeling safe, it can be difficult to receive a flower because we are not used to that.

The second time they came to visit, I felt they touched joy. Seeing the ease of our interactions with each other and the way the sisters played with the children, they felt happy and thought, “This is a family here.”

During my ordination they were really moved. They could feel the love and happiness of the Sangha’s embrace. At that time I started to see them as the community’s parents. They started to spend more time with the sisters and brothers. In a way, they really adopted them all. Everyone calls them Papa and Mama. Every time they come, they receive love and gratitude from everyone they meet.

They continue to feel this sense of family every time they come. My parents and brother came for Christmas last year and afterwards, they shared with me that it was one of the most beautiful Christmases they’d ever experienced. I could see how moved they were to see the beauty we created together. By coming here, they discovered things they had not imagined were possible—like love, acceptance, and inclusiveness—and all the things we cultivate in the Sangha. We are creating a culture of these things here. It is healing for them to see and be a part of it.

One day I mailed my dad a book by Thay, and he read it. Now, every time he comes, he asks for more books. I always choose one for him, and now he has read more books by Thay than I have! He told me that after he reads the books, he gives them to my mum. I was so happy to hear this.

He really studies the teachings. He underlined passages from the most recent book he read and shared them with me.  He remembered the image of a drop of water going into the earth and––instead of becoming nothing––becoming part of the living soil and continuing as part of everything again. No birth and no death. I felt it was important for him to read this at that time because my grandfather, his father, was quite sick.

My dad finds his own ways to practice daily. He likes to walk in the forest and has decided to walk certain parts of the path mindfully. One of the most touching things he said to me is that he feels my presence through the practice. Before, he would always eat very quickly, but now with the practice, he can see he is eating fast. He says to himself, “Your daughter would tell you to slow down.”

My dad has this fear of being separated from his children. He is afraid that we may not want to speak to him, or that we won’t visit anymore. So when he told me that he can see me in him in his daily life thanks to the practice, I was very moved.

When my mum comes, she likes to go to Dharma sharing. Sometimes she confides her feelings, and I hear things I had never heard before. I see she appreciates being in the monastery’s environment and feels safe, light, and joyful there. She told me that one day, she would like to come for a weeklong retreat. But my dad doesn’t seem to like Dharma sharing because he told me he is afraid that listening to other people’s stories could seem intrusive. He probably has some fear of vulnerability as well. He never got a chance to listen, and be listened to, in this way.

For me, it is a happy surprise to witness their acceptance and openness. I feel great appreciation and tenderness for their beginner’s mind, which reminds me to always keep mine alive. Whether my parents wanted to step on this path or not, they can now taste the wellbeing it brings them. They tell their family and friends that since I’ve lived in the community, they’ve benefitted as well. Everyone notices it. They’ve opened the door for many members of our family and some of their friends too. Some of them now come to visit me and taste Plum Village’s atmosphere.

For my birthday last summer, even my grandparents came. Initially, they didn’t want to come to the monastery. I think they were afraid, but they wanted to see me and the family, so we gathered nearby. Eventually, they showed me they accepted what I was doing and asked questions about the things they were worried about. My family is at ease with my path, probably because I am at ease with it myself.

Having the support of my parents supports me on this path. If I didn’t have that, perhaps I would have found it difficult to practice. So they have offered me a great gift. 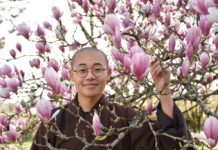 My Monastic Aspiration as a Child