An Interview with Elina Pen from Wake Up London 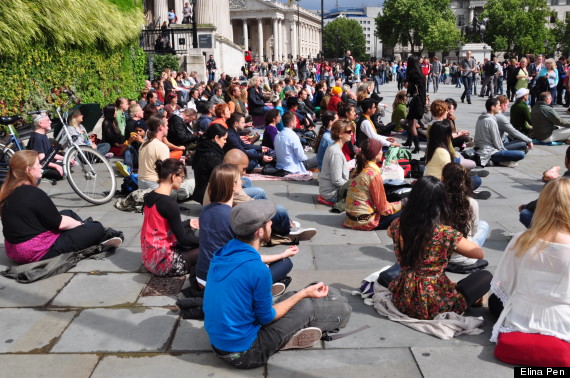 Its intention is to raise awareness of meditation in public, unite people from all backgrounds, cultures and faiths together and send positive intentions out to the world. We come together to celebrate our very real capacity to generate peace, already, in the here and now. This is the peace we offer to our cities and to the world.

What has the response been like so far? What was the first one like?
The first one surprisingly had a big turn-out. It was in the middle of Trafalgar Square on a hot Thursday evening in June 2011. I set up a Facebook invitation the month before in May and had no idea how people would respond.

Not long after the event invitation was set up, it seemed like it went viral as I was seeing hundreds of people sign up to attend week after week. It was really astonishing to see. The invitation reached various other spiritual groups in London and it felt wonderful to be united in this initiative with others, even if our tradition and practices were different.

When it was time to start, I sat down in the middle of Trafalgar Square and sounded the bell. For the first 30 minutes, I had my eyes closed, so I wasn’t sure how many people were there. I opened my eyes to start the sound bath, which is when we chant sounds together towards the end, and to my amazement, there were hundreds of people sitting in concentric circles around me. I had never imagined that being in the middle of Trafalgar Square could feel this peaceful.

I finished the flash mob with three sounds of the bell, opened my eyes again and looked around with so much gratitude to the people sitting so beautifully around me.

What is your own experience with meditation, and what has it done for you?
From my practice in the tradition of Zen master Thich Nhat Hanh, meditation has helped to cultivate a sense of calm and ease in my body and mind. In meditation, I simply rest my attention on the movement of my breathing – the flow of the in and out breath. My breath helps to anchor my attention in the present moment and bring my mind and body together as one.

I practice to come back to the present moment each time my mind wanders off to thoughts about the past or future, about anxieties or imaginings – and it nearly does each time I sit. I try to sit with whatever is there – boredom, pain, anger, self-criticism, joy, love or peace. 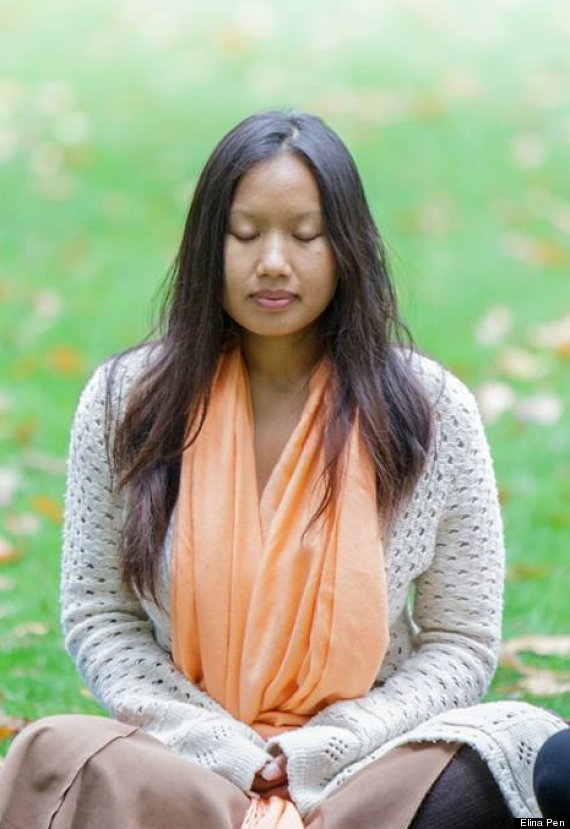 It’s not always easy but when I can be present with how I am feeling or what I am thinking about, and not get caught in it, I am able to be more spacious and kind to myself.

Right now in my life, I can say that I am the happiest and steadiest I’ve ever been before. It’s not because of any particular major successful life event, or being in this job or this relationship. It’s not because I don’t experience any anxieties or sadness anymore, because I still do. I think it’s because I’m learning how to be kinder, more compassionate and accepting of myself day by day, which I have struggled with in the past.

I used to think that the aim of spiritual practice is just to be happy and blissful and be completely free of suffering. But really, I see now that it’s about training ourselves to be able to have the space to be with both happiness and suffering in our daily lives.

Do you think that increasingly, people are looking for quiet and reflection in their lives?
Yes. I think more people are prioritising their wellbeing and happiness over such things like wealth, power and job status. Often it takes a kind of suffering, a physical, emotional or mental suffering, to wake people up to the current state of their lives, and move in a direction that is more nourishing for them.

Having the space for quiet and reflection where we can sit, breathe and look and listen deeply to ourselves, is essential. And doing this as a community too is essential because we need the support from others who also aspire to live life in a way that is nourishing for them.

In my own community, Wake Up London, there has been an increase of young people coming to our mindfulness practice meetings over the past three years. In 2010, we started with around 5 to 10 people at our meetings, and this year, we’ve seen on average around 33 people. It’s wonderful to see this rise and feel that we are reaching out to more and more young people.

What does meditation do for people?
One of the main benefits is more clarity and understanding about oneself and one’s experience. Meditation is difficult to quantify, but one can be aware of certain changes in oneself: we can become more centred, connected to our experience and knowledgeable about what is happening to us, to how we react, to see what triggers different responses within ourselves.

Usually we are more reactive than responsive. It also has the capacity to helps us connect and nurture qualities that essentially makes us more happy, like kindness, generosity towards ourselves and others, less fear and anger, the capacity to be more steady with difficult and challenging emotions.
We feel less driven by our desires and needs, and we are in a better position to understand others and better resolve conflicts.

Meditation flashmobs seem like a global movement – have you found this? 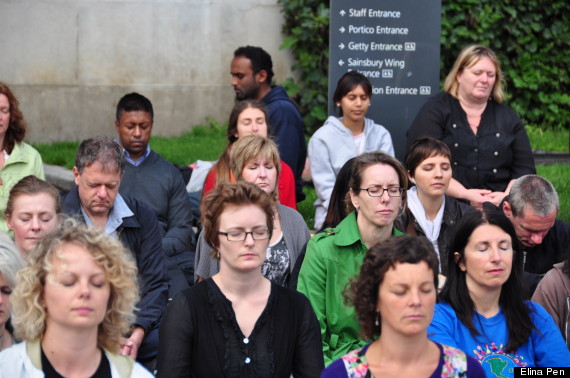 Now there continues to be synchronised meditation flash mobs around the world throughout the year, particularly on significant days like International Day of Peace, World Water Day, World Earth Day, Winter and Summer Solstice.

I think social media can have a positive role in facilitating such global movements such as this one. I’ve used Facebook a lot to advertise upcoming meditation flash mobs, and then later share the videos and photos afterwards. These links would often become shared to people around the world, and would inspire people in other countries to get involved.

What’s amazing too is that when my teacher, Thich Nhat Hanh, goes on tour with his community of monastics, there is usually a meditation flash mob included in the itinerary! In May this year, for example, there was a meditation flash mob in Barcelona which had what seemed to be 5,000 attendees! It was the subject of TV news coverage and of various newspapers in Spain.

To me, it seems to be difficult to meditate in an urban setting – what are your tips, for while you are in the flashmob, to begin meditation?
I can understand that. Perhaps many people feel hesitant towards coming to meditation flash mobs because it sounds difficult to be calm and centred in such busy places. What I’ve discovered is that it’s really possible to be at peace in these environments, whether sitting or walking. The key is in being mindful.

When we can have more space and be at peace with what is within and around us, instead of letting it disturb us, create tensions or become agitated, we can realise our capacity to generate peace throughout our daily lives.

This is how we can bring meditation in all aspects of our lives – not just formally on a meditation cushion but in everything that we do, such as walking in the underground, preparing for a meeting at work, sitting at our desk in front of the computer or standing up in a hot crowded tube.

This article was featured on Huffing Post UK Lifestyle