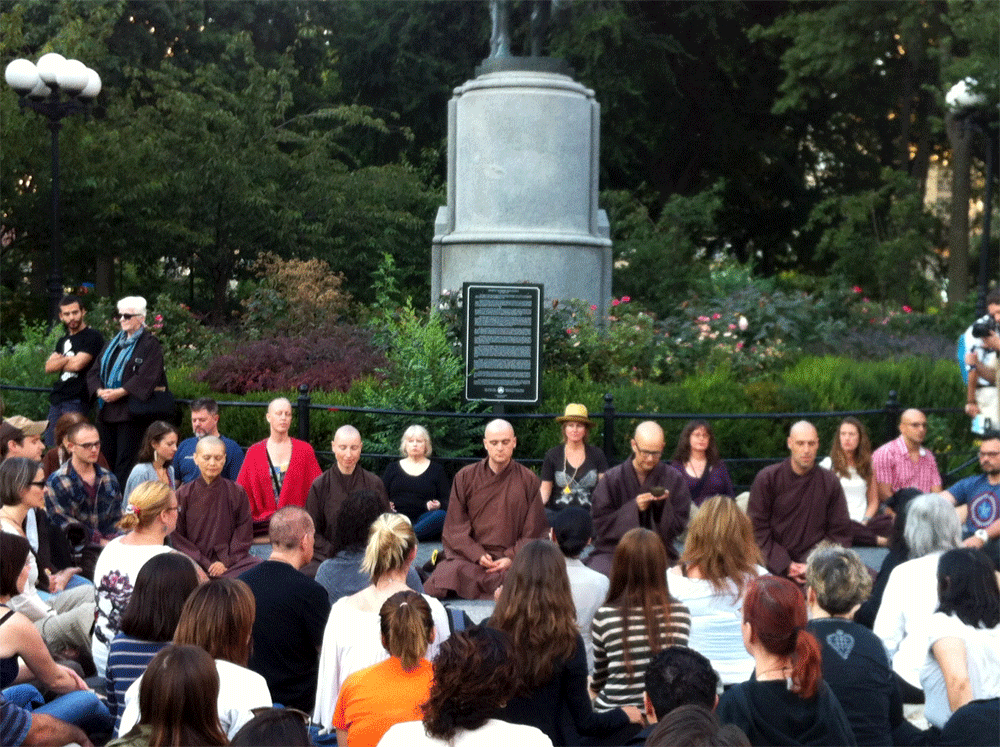 The outdoor sitting meditation was set up for 6:30 pm that Friday in Union Square, and we didn’t know how many people would attend.  I had just found the Plum Village monastics and friends sitting in the grassy area nearby, and at about 6:25 we picked up the blankets we’d been sitting on and walked over to the south plaza.

It didn’t seem like anyone was there for sitting; there was a group of Hare Krishnas chanting behind us, the cars and ambulances on the street, people rapping, others talking here and there. There were a few groups of people standing around, looking anxious and watching the monastics walk by.  Amazingly when the monastics sat down, the aimless crowd started sitting too, forming squished circles of people around us. I could barely hear Brother Ho say the bell gatha and invite the bell. Like that the sit started.

In the first few moments of silence a heckler startled us, yelling, “HELLLLP!  HELLLP! HELLP! YEAH YEAH THAT’S JUST WHAT I THOUGHT.”

I felt happy to have him, as if he was a future friend who was asking what we were doing. I thought he had a good voice too, and hoped he would join us for chanting some day.

During the sit, in coming back again and again to relax my body and pay attention to my breathing, it seemed that things were slowly ratcheting down. The Hare Krishna chanting seemed calmer and happier, the street seemed quieter and a cool breeze started. The heckler visited again but he couldn’t get as worked up as before.

I didn’t have a cushion and my posture felt awkward, but internal joy came up anyway. I felt a lot of gratitude to the group for maintaining the calm, and for how easy it is to continue stopping when so many people are stopping too.

The group had grown to maybe 400 or 500, filling the top level of the plaza. I had never heard a bell tower in Union Square before, but there it was, chiming on the quarter hour, and I felt like I was sitting in the shining living room of the city.

Sister Chan Khong joined us for the sit, and I could picture her in the past, stepping in to support young adult activists during the Vietnam war. I wondered if this looked to her like a silent demonstration for human rights, like ones she would have organized in Vietnam. I felt grateful to her for taking the time to write her book Learning True Love so we could understand what it was like to organize calls for justice while enduring violence and intimidation.

Here we only ran the risk of being bullied and arrested for sitting on the ground, and we weren’t protesting anything. But I felt protected nonetheless by Sister Chan Khong’s radiant smile and confident force of presence.

When the sit ended, Brother Man introduced her to the crowd, letting his neighbors teach him how to use the people’s microphone. When he was not sure what to do, Velcrow Ripper, a filmmaker who featured Thich Nhat Hanh (or Thay as we call him, meaning “teacher” in Vietnamese) in his film Fierce Light, called to the crowd “Mic check” and the crowd called back giddily “Mic check!”

Brother Man then introduced silent walking meditation to the crowd, so we would be able to enjoy every step to our next destination of the evening, ABC Home. Like a slow river we started walking together, stopping many passersby in their tracks. They demanded to know what were we doing, why were we silent, where were we going. Many of us stopped to explain.

I felt un-centered now as well, and I wondered, were these actions really beneficial to us, to other people? I had no way to communicate to the group leaders about how things were going, how we should manage all these people. I could only walk with the group now, hold hands with one of my teachers, and go with the river.

We continued walking meditation through ABC Home, and I got to fully enjoy the window displays. I had some concentration from the walking meditation, and I could easily focus on what I was seeing. I enjoyed seeing the forms of pressed white ceramic bowls, chunks of aqua glass, small objects arranged in threes and lines, and Thay’s calligraphic messages blown up on silk cloth.

We reached Thay’s calligraphy exhibit, which was our destination, and the crowd spread out to look at the artwork. I started to admire again the supportive statements on the walls, the intricate sand and flower displays that complemented the calligraphies of black brushwork on rice paper.

I could accept their invitation to stop and listen to myself with compassion, to remember that this is a precious moment. Sister Chan Khong’s beautiful voice suddenly filled the space, and I smiled again knowing she was really there, singing to us…I am blooming as a flower….I am fresh as the dew….breathing in….breathing out.

The crowd started gathering around her to listen and learn a new song, but I hung outside the crowd. The nearest calligraphy was calling me back in, and it said so clearly in big nice letters: let go. But I wasn’t ready for that yet. I thought I had to worry about keys and make sure no one invited all 300 people to the next activity, which was in a space that would only fit about 100.

I chatted around anxiously till we found the people with the keys, and we rushed down and out of the store to the next location, missing the rest of the talk and the time to relax and enjoy the calligraphies.

At the yoga studio where people would come next, I did my best to control the conditions so people would feel comfortable and be able to enjoy the practice. I wanted to make sure the last class got out on time so that we could set up seating.

Then we got the word from one of the organizers over the phone, “We invited everybody.” I pictured 400 people struggling with each other to get into the space and I felt panic welling up. I walked slowly to one of my brothers and asked, “What do we do now?” “It’s OK,” he said. “If people don’t like it being so crowded, they will leave.”

It was such an elegant solution I could barely believe it.  I could welcome people into the space now with joy and without worry, although I kept trying to help those coming in late while preserving the peace of those who came early.  This was entirely impossible for me to manage, so I lay down on the floor, listened to the chanting my brother had started, and tried to let go.

As the evening went on, Sister Dedication led a wonderful guided meditation, which included the phrase, “I am a still mountain lake, reflecting all, accepting all exactly as it is.”  I thought that’s me for sure, lying on the floor, doing nothing!

Sister Trai led calm exercises for the group, which made me feel happy to the core. Brother Linh guided us in sharing about our joys of the day, and everyone in the room seemed to really know that this was a wonderful moment, that we had had a wonderful evening together. People’s appreciation for getting to participate and experience the calmness of the sitting and the walking, and seeing other people who also enjoyed it, created a solid strong joy that felt shared by every person. I tried to concentrate so I would not miss it, and joked about how I was really enjoying not being in charge.

At the end of the evening the brothers asked me, “So what next, Jenny?” I could confidently say, I really had no idea.

The love and gratitude in that room was so strong and bright, that there was really nothing to improve and nowhere to go. I now can think happily of how many people worked to put together so many parts of the evening, and how lucky I am to not always be in control of it. Even in my most skillful moments, I would not be able to create that much happiness and joy on my own.

Jenny Hamp is a member of Wake Up New York, a meditation group aimed at bringing the practice of mindfulness to young people. She is a mechanical engineer working in building energy and utilities. She lives in Brooklyn, and enjoys playing drums and spending time outdoors.