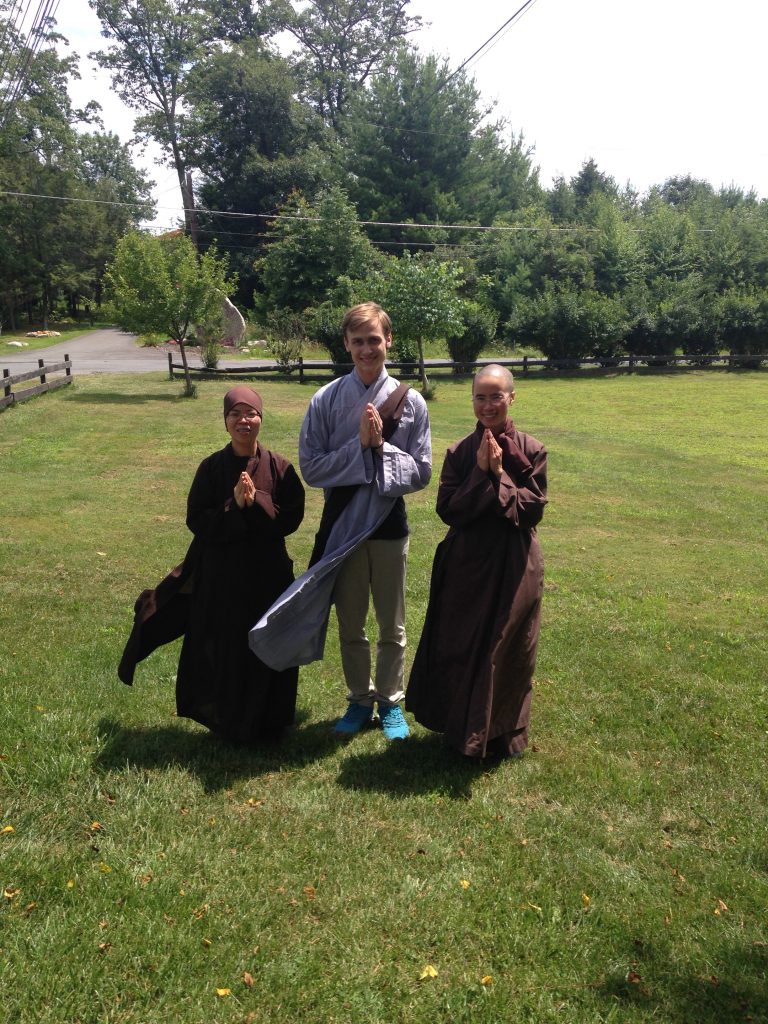 I recently spent a four-day retreat at Blue Cliff Monastery. I have practiced the Plum Village tradition of Buddhism for two years and felt a deep desire to return to a monastery before I began working for a cruise line in August. Let me give you some background on where my motivations came from.

Last summer I watched my daily meditation practice slip out of my hands and down the drain of human ignorance, laziness, and greed. I never completely lost touch with my mindfulness practice, and without it I surely would have been much less happy than I was. These months without a formal practice were not completely filled with suffering, but they were filled with confusion, craving, and basically too much Netflix.

The suffering I felt often came unexpectedly, throwing me out of orbit and into a chain of defensiveness, criticism, and ultimately led to my running away from my suffering by doing things like trolling Grindr and playing Candy Crush. I rekindled my daily practice at the start of the new year, about six months after I had lost it.

With this, I began to sow the seeds of understanding and mindfulness in myself once more, and I felt my practice feel life and growth again.

With my meditation practice in tow, I continued acting on the habit energies and behaviors I had been engaging in the past six months. I observed without judgment the patterns I had developed, the cravings I felt and usually acted upon, and the many moments of forgetfulness that were scattered about my day. This continued for a while, until I experienced a sort of “enlightenment” of sorts whilst on my meditation bench in Ivoryton, Connecticut. The fruits of my meditation practice suddenly blossomed like a lotus springing forth out of a muddy pond! I was awakened to the impermanent and interdependent nature of my life, and I began to remember my true aspirations.

I felt refreshed, filled with the energy of mindfulness. It was almost as if I had woken up from a long nap which was brought upon by the powerful lull of complacency. My mindfulness was like Mary Poppins, stern yet gentle, singing Disney songs while feeding you the gross tasting medicine of uninhibited self reflection. I realized that my meditation practice was not simply something to do twice a day, but that mindfulness was the life I wanted to lead. As Thay (Vietnamese for teacher, the word used at the monastery to refer to our teacher, Thich Nhat Hanh) would say in a video Dharma talk I enjoyed at the monastery: Mindfulness is not a tool to lead a happier life. Mindfulness is the path. Happiness is the path. There is no path to Nirvana. Nirvana is the path.

I began meditating more often. Not because I had to, because I began recognizing that I felt much better after meditating than after watching five hours of Netflix or playing Tetris five times in a row. My “meditate twice a day, once for thirty minutes and once for ten minutes” quota went out the door, as I began practicing meditation frequently. I enjoyed sitting in my dressing room before performing in All Shook Up at the Ivoryton Playhouse. I enjoyed sitting on the beach with my friends. I began to feel the snowball effect that meditation and mindfulness have!

The more I practiced, the more I enjoyed each moment and wanted to continue living deeply in the present moment. I didn’t need encouragement, because the happiness and joy I felt was more than enough to fuel my practice! I watched my actions become softer, my words kinder, and my steps slower. I realized how so much of the suffering I have caused myself and others have been because I was simply moving too fast, carelessly spewing words and making assumptions about people. What I needed was to slow down. My new mantra is Slow, Silent, Still.

So naturally I wound up at a Buddhist monastery.

The understanding I had begun to grasp in my meditations in Connecticut were deepened and strengthened by the wonderful Sangha of Blue Cliff. My time there nourished my practice very deeply, inspiring me more and more every day. I felt the karma of mindless Tinder-swiper Logan beginning to transform and heal with the mindfulness that Happy, Mindful Logi the Yogi began to bring to the table. This in turn assures that in August, Cruise Ship Dancer Logan will be able to receive the wonderful fruits of a strong meditation and mindfulness practice, a compassionate and open mind, and a warm and gentle heart. All three of us are very happy together.

While enjoying a talk with Sister Tranquility, a small nun with a huge smile (she is the nun on the left of the picture posted), she invited me to come to the retreat for young people that would be happening later in the fall. I told her how I would be leaving soon, and it eventually got out that I was going to be a fancy dancer on a fancy cruise ship going to very fancy places. Monastics in my tradition of Buddhism don’t get entertained a lot, and so this all sounded very exciting to them. Sister Tranquility asked to see me dance, and I laughed and told her that I would show her before I left. My last full day of the retreat came around, and I found Sister Tranquility to tell her that I would like to dance for her like she had asked!

I had no idea what I was going to do, but I figured I would just show her a couple of tour jetes and maybe a double tour on the grass lawn. Nuns aren’t allowed to spend time alone with another man, and so I invited another nun I had gotten to know, Sister Mindfulness Trainings. Sitting with her at the table was a beautiful Aspirant (future nun) named Kara, who had a cousin who had danced on a cruise ship. Sister Tranquility told me that we should go to the Big Meditation Hall, which had plenty of space and nice wooden floors. Suddenly I realized that this was not some haphazard technical demonstration that I was to portray, it was to be a full out ballet performance, in my baggy t-shirt and sweat pants.

I went back to my dorm to think of things to do, I came up with an eight count phrase that I thought would at least be a good starting off point. I imagined I would do a couple things more, all depending upon whether the floor was slippery or not. I headed to the meditation hall. Little did I know that Kara, the Aspirant, had proceeded to invite everyone in the dining hall to come watch me dance. I began to see laypeople and monastics alike trickling into the meditation hall. Maybe about twenty people were there, which was basically seventeen more than expected. I began to think about music! I couldn’t dance without music. My phone was turned off and far away, but someone had YouTube on their phone and I went thinking. Ballet music…. ballet music… Don Quixote! I know that.

So I looked up some Don Q music, assuming I would find a big sweeping variation that I could improvise to. A monk suggested I use the computer connected to the sound system, and so I pulled up the video and found a variation. I stopped the music and went back into the hall. Everyone had arranged themselves in rows, now waiting for me to begin. I introduced myself and bowed. I had the monk press play, and I began to improvise some ballet for a group of people I hardly knew. The song that played just so happened to be the daintiest and quietest song in the whole ballet, making my efforts to be the masculine male ballet dancer I was trained to be completely futile. But I danced, and I will say that I have never been so mindful while dancing! I was free of cares, free of worries, just thinking about straightening my legs, pointing my toes, and smiling. A triple pirouette, some Italian foutettes, a couple of grand jetes, and many developpes later, the song finished, and so did I. Everyone clapped, an unusual thing in a monastery!

They wanted me to dance some more, but my body was exhausted after just doing an on the spot variation to music I had never heard, without warming up, and without having taken a ballet class in two months. But I was very happy. We all sang a Dharma song together, and I told them that while I was too tired to dance again, I could sing a song. I chose to sing the song “Happy Days are Here Again,” a song made famous by Barbara Streisand. The lyrics are beautiful, and I think they relay a message that Thay relates to us over and over again: happiness is here and now. Standing there, in front of twenty of the most beautiful people I have ever seen in my life, and belting my face off to a Barbara Streisand ballad in a very resonant meditation hall, I felt truly happy. Afterwards Sister Mindfulness Trainings (pictured on the right of the picture) came up to me and told me how what I do is so mindful and beautiful. It made her very happy.

It was at this moment that I felt a complete synthesis of the environments most important to me. In the past I had brought mindfulness and meditation to the theatre and the ballet studio, but this time I brought ballet and Barbra Streisand to the monastery! It reminded me of my deep aspiration to bring happiness to people through the arts, and inspired me to continue on this path with beauty, mindfulness, and a couple of grande battements. My practice and my career nurture each other, and have begun to become one with each other. I cannot take the dancer out of the meditator, I cannot take the mindfulness out of the dancer, etc. We are all one, sitting silently and flailing about simultaneously in a cacophony of noble silence and the loud, bright sound of belting a high B flat. I couldn’t be happier.

This article originally appeared on Logan’s personal blog, which you can find here