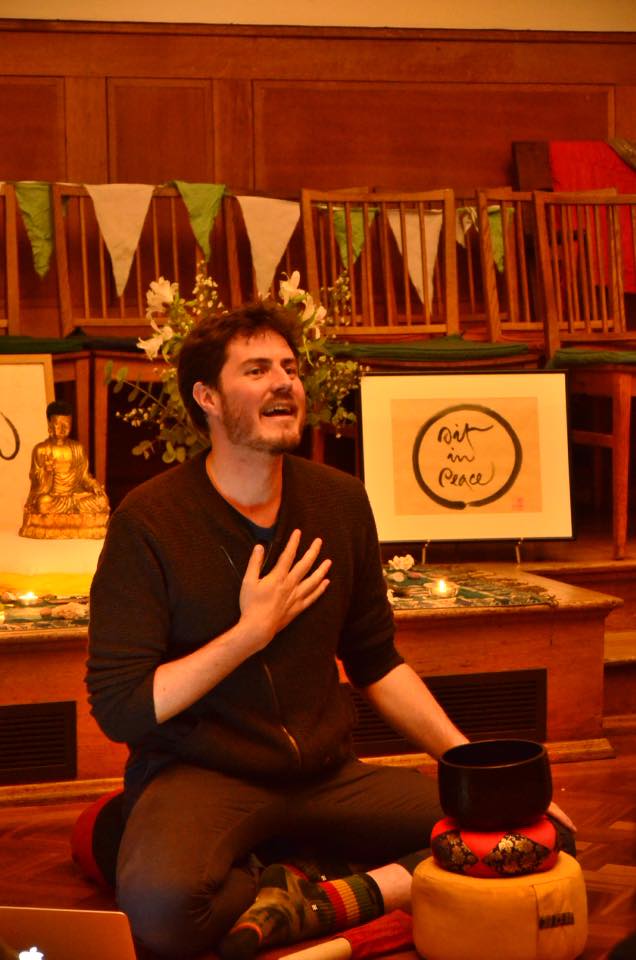 I have a good friend and Dharma bro who went to Plum Village and told me, “Wow it was amazing. You’ll love it! There’s this group called Wake Up London and you should check them out.”

The first time didn’t go well because at the time in 2011, they used to meet every other week and I went on the wrong week! But I remember getting the sweetest of email responses when I wrote to Elina, the Wake Up coordinator at the time.

When I eventually did go, I immediately felt it was a special group. I was used to either sitting in silence with other meditators or when I went on other retreats, there were mostly the mid-life crises crew and only a few young adults.

I love the fact that Wake Up creates a place for young people to come together, meditate and share. I went a few times to Wake Up London before I moved to Munich. When I arrived there, I found a contact for Wake Up Munich thanks to Google. At the time in November 2011, they were trying to get the group off the ground. It was Josef and another friend, but the group didn’t take off. In the beginning there were five people, but after a month or so, it was only Josef and I so we would sit together and have tea afterwards. It petered out pretty quickly.

In August 2012, I went to the health retreat in Plum Village which I recommend. There were two Wake Up Dharma-sharing families: French and international. I was in the international one and was able to form beautiful friendships with both families.

That retreat was one of my most profound and transformative experiences. Firstly, I learned that retreats don’t need to be difficult to be good. You see, I was coming from a perspective of working hard through my 10 days of silent Vipassana retreats.

Why was it so transformative? Many of us have the feeling in our heart that a better world is possible. In Plum Village, you see glimpses of that heart-based world and a way of relating and interacting with each other with a different frame of mind. I don’t want to turn Plum Village into a utopia; it’s definitely not. But we had a lot of people from across the globe with the intention of being together with presence, love and compassion. It was really beautiful to connect with people there. I came back thinking, “Wow a better world is possible!”

I came back very invigorated from the retreat. I met a beautiful sister called Katharina who was also from Munich. Together with her and Josef, we set the intention to start Wake Up Munich again. That time, it really took off. Katharina and Josef both have long-standing mindfulness practices, and they deserve much of the credit of getting Wake Up Munich off the ground.

I was blessed with a nice apartment, so we could host the Sangha meetings at my place. Between five and ten people would come so it blossomed into a small, strong Sangha. It was good to have a place where we could meet every week because now they are hopping between people’s houses. But it’s still working; the Sangha continues beautifully. 🙂

I made many beautiful connections there. Interestingly, it’s a different Wake Up crowd compared to the one we have in London. The core group in London is a little older like me, between 28 and 35, whereas in Munich it’s quite a student city. I was definitely the “granddaddy” of Wake Up Munich! But I’m a young spirit so I don’t think people realise how old I was 😀 Wake Up was a big part of my time in Munich, filled with many happy memories.

Now I’m back with Wake Up London. One of the reasons I wanted to return to London was to re-connect with the spiritual vibe here. It’s not just Wake Up, which I’m super stoked to be part of. But there are also other activities, such as the Awaken Circles, Random Acts of Kindness, yoga raves, and ecstatic dance. There’s a lot going on here in the spiritual and creative space.

Re-connecting with the Wake Up London Sangha is definitely something that I wanted to do when I returned, especially because I like the idea of connecting with Wake Uppers from around the world – and London is a rainbow Sangha. Wake Up overall has a special international camaraderie. I’ve been blessed to go to different Sanghas such as Wake Up Philadelphia, New York and Berlin and meet people from other Sanghas who are from San Francisco to Torino.

Wake Up has its own energy. For me the Wake Up vibe is of mindfulness and presence without getting too much into dogma. To paraphrase Thay, I find many Wake Uppers who are finding peace within can share their gifts to create peace in the world. It’s beautiful to connect with people from around the world who represent that awakened energy in their own way.