By a lay friend 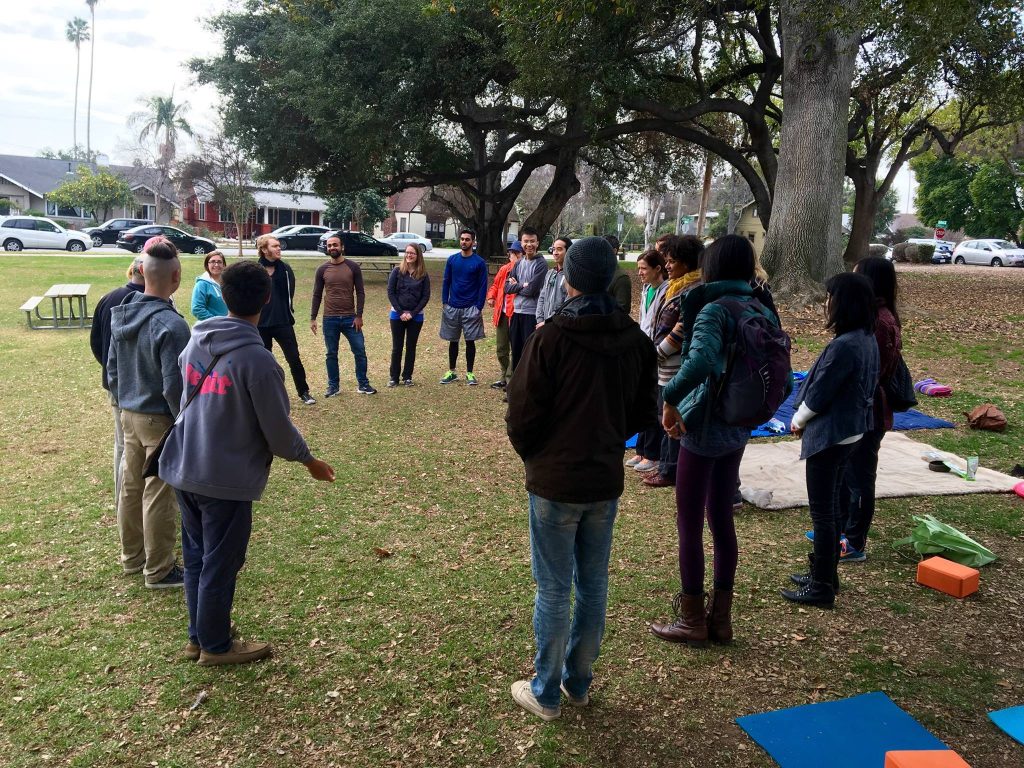 On January 23rd, 2016, around 25 people gathered for a Day of Mindfulness at Garfield Park in South Pasadena, just outside of Los Angeles. From the outset of our time together, our intention was to “go as a river.” We knew that many of our group would arrive slightly late and some would have to leave early. Just like a river allows for some streams of water to join downstream and others to leave when they need to, our way of being together was fluid, open and unattached. We claimed a small area of the park for blankets and other items before enjoying about 20 minutes of sitting meditation. After sitting, we discussed our aspirations for 2016 in small groups, both to nurture our sense of community and to focus our intentions for the New Year.

Just like a river allows for some streams of water to join downstream and others to leave when they need to, our way of being together was fluid, open and unattached.

After sitting and sharing, we enjoyed walking meditation for about forty-five minutes. As we approached the far end of the park, children were playing in a makeshift winter wonderland. Snow had been brought in, and children were sledding down a small hill with their parents (snow is not something southern California children get to see very often, so it was extra special to hear their squeals of delight as they went down the hill). In the midst of the quiet mindfulness of walking and the play of children, a mother had lost her three-year-old daughter and was searching frantically for her. I became very concerned about what I should do, as I was leading a large group of people through the park. There were many thoughts moving through me, and I ultimately decided to keep walking mindfully, sending a prayer for this woman, and keeping my eyes peeled for her daughter. I am still not sure if this was the “correct” choice, but I also felt that some of our group would also see the situation and might decide to help.

I was so moved that these two practitioners were so mindful and aware that they saw clearly a way to bring their practice of mindfulness into the immediate world around them.

Two of our Sangha members did that, and the woman found her daughter on the other side of the festivities. Later, one of the young women who went to help told me that the words at the beginning of walking meditation helped her in her decision to assist the woman looking for her daughter. I had offered the suggestion that we remain mindful not just of our steps and our breathing, but also of the things happening around us: the children laughing, the birds, the wind, etc. I was so moved that these two practitioners were so mindful and aware that they saw clearly a way to bring their practice of mindfulness into the immediate world around them. I felt that it was really the embodiment of socially engaged Buddhism. We were able to continue our walking, while some of our Sangha members helped this woman find her child. I had imagined twenty-five of us splitting up and desperately searching for a three-year-old with dozens and dozens of children everywhere. The fearful search I envisioned didn’t seem like it was actually going to help the situation. What did help were two mindful practitioners who took their practice into the world.

After walking, we took a break, had some snacks, used the restroom and then came together for a final period of sitting, after which we had a closing circle. Each person was able to share about how the day impacted them. After this, we enjoyed a late lunch and some who had driven up from San Diego stayed the night with the Sangha family in Los Angeles. The next Friday, at our relatively new Wake Up Sangha in Northeast Los Angeles, we had seven new attendees, several of whom returned the following week as well.

Bridges were built; connections were forged, and an already existent community was deeply nourished.

What struck me the most about this Day of Mindfulness was how simple it was to organize. With two active Wake Up Sanghas in Los Angeles, there was so much interest. It was only a matter of picking a day, a place, and a rough schedule to the day that could be adjusted as needed. Though it was Wake Up organized, it was an inclusive day, and a few people who were not technically “Wake Up age” joined to make it even more special. There were folks in attendance from other spiritual communities who got to practice in the Plum Village tradition for the first time. Bridges were built; connections were forged, and an already existent community was deeply nourished. In the end, it didn’t matter if there were five or twenty-five people. The Sangha came together to practice in a beautiful way and to embody peace in the world. We have been organizing Days of Mindfulness through Wake Up in Los Angeles around once a month for almost a year now. While I am already looking forward to enjoying the next once, I know that the true practice is right here, in the present moment, as I type these words and breathe these breaths.

To contact the Wake Up Los Angeles Sanghas, you can email them here or visit their Facebook groups.