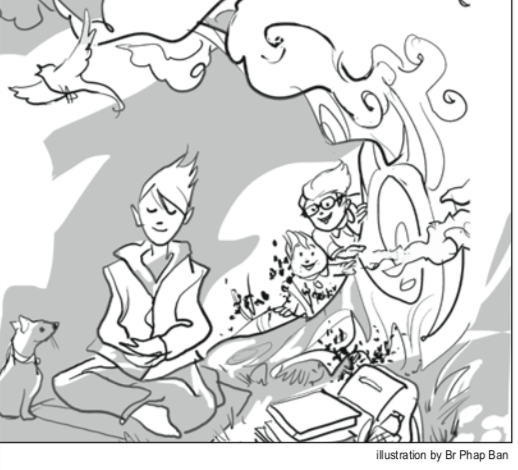 Saturday, October 21, 2017
Today, we had an extraordinary half-day of classes. You know, to supplement our learning.

8:00 History: “Good morning! Let’s begin with a warm-up exercise: I’d like to you to discuss the role of women in the nineteenth century American political sphere.”

9:50 Free Period: A meeting with the divestment group in which students are involved in an effort to shift the school’s investments to green finance.

10:40 Mathematics: “Based on the problems we did last night, how does one construct a transformation matrix with sinusoidal functions?”

At the boarding school I attend in New Hampshire, everyone is constantly overcommitted. Other than having five full class days a week, we have sports daily, an average of four hours of homework a night, and several extracurricular activities. For instance, I participate in a tri-weekly choir, piano lessons, the divestment group, the environmental group and, last but not least, the meditation group.

Having a Sangha as a point of reference has been an anchor. I normally live in Plum Village, where there is always time for a cup of tea, where deadlines are considered to be warm invitations, and where on the way to the bathroom one might well stop to smell a flower. I first encountered the Sangha at the age of seven, when my mother brought me to a weekend retreat in provincial Italy.

I just remember scurrying around in the autumnal countryside with a few other children, mischievously stalking cats, secretively climbing trees and roofs in the attempt of picking the persimmons which hadn’t already been harvested, and experimentally burning all sorts of small objects to see what smells they would emit upon combustion (at this point, you might deduce that the retreat didn’t foresee a children’s program). The only time we were with the rest of the Sangha was during meals, followed by friendly chats afterwards. Those were my occasions to interact with the monastics.

Once, right after we’d washed our dishes, I innocently asked one of the monks something that had been bothering me for some time: “What came before life?”

He smiled and shook his head.

“Let’s say, there was nothing before you come to life.”

“No, what I mean is: what about before that? Some people were born before me, and before them.”

“I mean before that!”

Another smile: “We don’t know.”

Normally, I would have been unsatisfied with such an indefinite answer and, make no mistake, I was. But it dawned on me that perhaps it wasn’t just a matter of the monk’s ignorance, but that nobody really knew what came before the Big Bang and that there are things which cannot be known.

For many years, I thought that weekend had been a dream. Frustratingly so, for every time I asked myself “What do you want to do with your life?”, the response was: If there were such a community, I’d like to serve it.

You can imagine how impactful my first visit in Plum Village was eight years later, when my mother dragged me to some weird Buddhist Monastery for Christmas! I wasn’t aware that Plum Village was in fact the community I had had in the back of my mind for eight years, but there was such a strong sense of belonging that my mother immediately began spending all our vacation time in Plum Village.

Eventually, my mother left her position as a teacher to volunteer for Wake Up Schools, and I decided to take a year off from school to learn about more than books and formulae by living a complete yearly cycle in Plum Village.

In contrast to the contemplative souls in a monastery, people seem to function in a constant blur of activities, thoughts, appointments, preoccupations at my school. Often people come here because they were the best wherever they came from; now they are committed to being even better once they’ve received this life-swallowing education.

I came because I like studying–there is a certain thrill I feel in penetrating another stratum of the endless mystery of life. One could speak of this as the Dharma, the way of perfect understanding. There being countless Dharma doors, study is the one I prefer.

Upon my arrival, I was a bit apprehensive of what would happen to me in such a demanding and notoriously stressful environment. Last month, a student at our competitor school committed suicide. That same day one of my fellow students disappeared, only to be found hundreds of miles away the next day.

How could I retain some of the calm I felt in Plum Village, look at people who are too absorbed in their pursuit of greatness to listen to others with compassion and respect, and respond to negative comments and complaints in a way that is not dismissive and yet shines a bit of light on how fortunate we are?

I found that it’s possible. Of course, I also get lost in worries about the future and regrets about the past, and I most definitely don’t walk slowly from one class to the other. But overall I feel quite content. There are so many things to do in a day (sometimes I have nine appointments in addition to homework); I just try to go through them one by one.

If it’s time to talk about enzymes or even to endure French grammar, then that’s what I’ll be doing. Personally, I feel it takes significantly less mental effort to be present and allow myself to be carried by the moment.

My favorite time of the day is the thirty minutes between my math class and my yoga class. Most people would use that time to go on their phones, read an extra twenty pages of something, or do those two math problems. I, however, go to a nearby park. A particular bench at that precise time of day has perfect sun exposure. I simply lie there, enjoy- ing the warmth, feeling my link to home, and smiling to the people across the ocean whom I love.

With them, I gaze at the reddening maple leaves. Without even setting an alarm clock, I know when it’s time to get up and walk to the gym. I wonder. . .how is it that our bodies know when it’s time to be somewhere? Perhaps by just trusting the body, those subtle hunches, and literally “going with the flow” of life, we don’t have to constantly swim upstream.

Jadzia Tedeschi, Compassionate Manifestation of the Heart, is seventeen and grew up in Italy, where she first came in contact with the Sangha. After living a year at Plum Village, she is currently going to a boarding school in the United States.

Reprinted with permission from www.mindfulnessbell.org