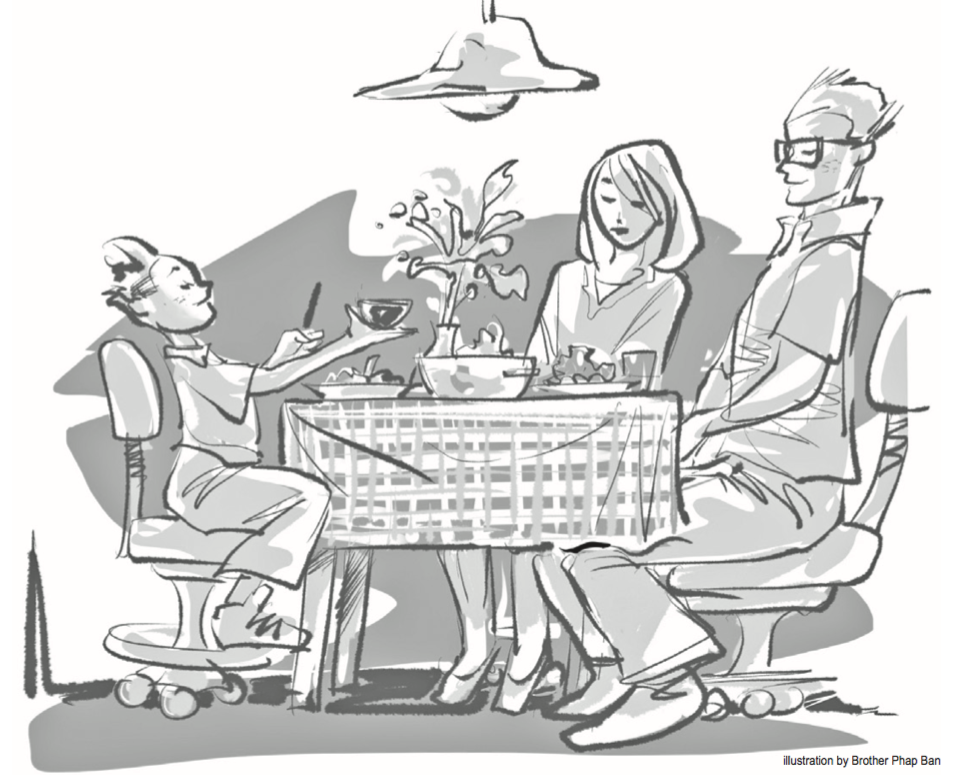 It’s the day before Father’s Day as I write this story about a mindful meal. Tomorrow will be my third Father’s Day without my dad, who passed away two years ago after losing his battle with alcoholism. How serendipitous the timing is for this story, as the most touching meal I’ve ever partaken in was with my dad in the late summer of 2012.

I was seventeen and had just returned from my first visit to a monastery (Deer Park). I’d been exploring Buddhism and meditation for a couple of years, but my exploration became dedication when I found myself receiving the Five Mindfulness Trainings surrounded by a sea of smiling faces at the end of my weeklong retreat. I’d never seen so many happy and peaceful people in one place as I had among the monks and nuns at Deer Park.

On the trip home to Albuquerque, I felt invigorated and excited to share the wonderful practices I’d learned in California. I was staying with my dad in New Mexico for the summer, and I knew my chances of convincing him and my family to sit and meditate were slim to none. My father and grandparents were still quietly mourning my choice to leave the Christian church, so they weren’t entirely enthusiastic about my newfound commitment to Buddhist meditation. However, they always showed enormous support and love for me as my dad’s only child and my grandparents’ only grandchild.

I thought sharing a mindful meal together would be the perfect way to introduce my family to meditation practice. They agreed, probably because they saw how excited I was about the idea. We made vegetarian spaghetti and sat in the dining room. Seated at the table were my dad, his girlfriend Rachel, her mother Cynde, her son Devon, her grandmother Vicki, and my grandparents. The table was set as if for a holiday, as we typically ate together in the formal dining room only on special occasions.

Before we began, I explained to everyone how eating meditation is practiced. We would sit together in silence and enjoy every bite of our food. We would set down our forks between bites so we could savor the tastes and fully enjoy each moment. We wouldn’t need to discuss anything or argue. We would just sit peacefully together and enjoy our meal. I believe I set a timer for twenty minutes. We began the practice.

Throughout the process of cooking the food and pouring the drinks, I was skeptical of how likely we were to succeed. My family was notoriously loud, argumentative, and passionate. I was the outspoken liberal, the others all die-hard conservatives, though I usually spoke loud enough to match the volume of all six disagreeing with me about health care and tax reform. Yet here we sat in silence together as a family.

The only other time in my life I can remember being so silent with these particular people was three years later, at the hospital where my dad lay unconscious, his kidneys and liver failing. We sat together surrounded by friends and family as we said our goodbyes, and all we could do was hold each other. The sound of quiet tears replaced the sound of forks clinking, but in both moments, the powerful silence felt like an almost tangible presence, perhaps a bit uncomfortable for those not accustomed to it.

After the twenty minutes, we were all relieved to be able to speak again. We giggled, expressed amazement at our success, and cleaned our plates. I later learned that my dad had told Cynde that he hated the experience, particularly because he could hear my grandma chewing loudly the entire time. He suggested that next time we use music. But for those twenty minutes, everyone at that table opened their hearts and minds to my innocent enthusiasm and humored me with silence, and hopefully a few mindful bites.

I can’t recall the memory of this meal in great detail, but I hold the meaning and feelings it evokes close to my heart. My dad and I had a tumultuous relationship throughout his life, but an abundance of love was never lacking. We could never stay angry with each other for long, and we would always hug after a fight.

My dad was a man who had prayed for a son who would become a star baseball player and athlete, and instead he got a sensitive, artistic, musical theatre performer who detested sports. Nevertheless, he still cheered me on at the end of every performance. This man didn’t believe in evolution and thought liberals were going to bring about the end of the free world, but still respected my political views as I continued to discover my own very liberal voice as a political citizen.

This man couldn’t wait to take me to strip clubs and bars in Las Vegas for my twenty-first birthday, but he got a gay son who doesn’t drink. My dad didn’t live to see my twenty-first birthday, free of strippers and alcohol as it was. But he still sat at a table with me for twenty uninterrupted minutes, pushing through intense irritation, next to his mother loudly chewing spaghetti, just because he knew how much it meant to me. If that’s not an expression of love at its deepest, I don’t know what is.

Logan Scott Mitchell, Inclusive Aspiration of the Heart, has been practicing in the Plum Village tradition for five years. He lives in Scottsdale, Arizona, and helps facilitate Wake Up Arizona. Logan is a professional actor, singer, dancer, and yoga teacher. For more information, visit his website.

Reprinted with permission from the Mindfulness Bell.