Growing the Seed of a Wake Up House 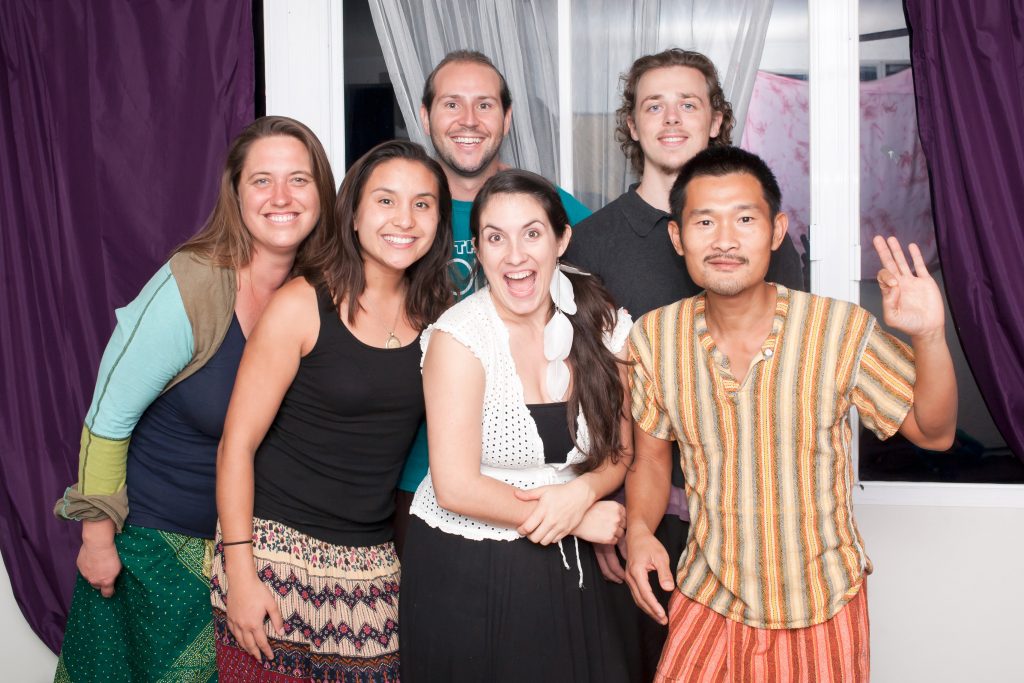 A Wake Up house is an intentional community of dedicated young mindfulness practitioners who have a strong aspiration to support one another on their respective spiritual paths. It is a natural extension of the Wake Up Sangha. It becomes its own entity, but is still strongly interrelated with the original Sangha from which it stemmed. Much like a married couple which forms a Sangha of two within the Sangha where they both practice, a Wake Up house is a group of young people who form bonds much like those in a family and practice in their own Sangha within the Sangha.

We have had many late night talks, many tears, tons of hugs, and lots of love over the last two years.

One question can help you see the importance of a Wake Up house: Have you ever left a retreat at a monastery in the Plum Village tradition and gotten sad that your heart will have to close back up because you are about to re-enter the “real world”? Perhaps you practice with a weekly Sangha already and that helps with this feeling to some extent. But that may not be enough support to maintain the openhearted and life-transforming energy that is cultivated during a stay at one of our lovely monasteries. A Wake Up house is a home for practitioners who want to continue the retreat when they leave the monastery.

Planting the Seed and Awaiting the Right Conditions

In San Diego, the Wake Up house started out as a seed inside the heart of a dear brother in the Wake Up San Diego Sangha. At the time, the Sangha was only meeting every other week at his house. He brought the idea to the attention of a couple of us who were also committed practitioners. We discussed the idea informally after Sangha gatherings. The seed nestled itself in and awaited just the right conditions to manifest. None of us was ready at the time, but we thought we could move forward early in the spring of 2013. As the months passed, conditions improved and the seed began to sprout in the form of informal gatherings of prospective roommates.

We began searching websites for a place we could rent, even though we weren’t sure if we were looking for a three- or seven-bedroom house! As time passed and we needed to make decisions on how many bedrooms, we began to see that people who were saying “maybe” were essentially saying “no” but hadn’t decided yet. Our group narrowed down to five, and with spring approaching fast, it was time to make decisions. One committed member, the brother who originally planted the seed, felt his heart pulled into a different direction and went down another path. We found a place and signed the background check forms, and then another brother decided this path wasn’t calling his name anymore. We three had already signed the lease, and with just one month to go, we found another Sangha brother committed to the practice who was also willing to give this a try. We all moved in on April 3, 2013.

Starting a Wake Up house comes from one person’s strong aspiration to practice in a group setting beyond the weekly Sangha gatherings. If that aspiration is strong enough, and if at least one other person’s aspiration is also strong, nothing can stop it from manifesting. This beautiful concept is similar to the Wake Up community itself; it is what you make of it. A Wake Up house can be a very loosely structured intentional community where practitioners simply live together, or it can go to the other extreme and be as structured as a monastery with residents expected to receive and practice the Five Mindfulness Trainings as well as participate in formal Sangha activities such as facilitating, cleaning, practicing sitting and walking meditation, and hosting retreats at the house. The San Diego Wake Up house is in the middle: our loose structure allows room to grow, but it’s not so loose that the community crumbles.

Each month we enjoy practicing Beginning Anew and holding a house business meeting; these are staggered so that we meet every two weeks. We find that the business meetings are a preemptive tactic that help us to solve common problems and prevent conflicts from arising, whereas the Beginning Anew sessions allow us time to reflect upon the past and provide space to water flowers, express regrets, ask for support, and heal any hurts that have arisen.

We find that the “mud” we uncover in beginning anew sessions effortlessly give rise to agenda items for our business meetings. All of this leads to strengthening the bonds of brotherhood and sisterhood beyond measure.

Each week, we also host the Wake Up Sangha meeting, which provides a regular space that is stable and grounded, in addition to containing the collective energy that we cultivate. This also has allowed the Sangha to become more established because we can store the meditation mats, cushions, bells, books, and anything else the Sangha needs. As a house, we provide tea and snacks in addition to practical things like lighting and toilet paper (but we welcome donations to allow everyone a chance to practice generosity). We housemates enjoy practicing with the greater community because it keeps us stable in our own practice, it allows us to continually grow, and it’s really just a joy to welcome such amazing people to our home. It leads to a synchronized opening of our hearts.

The people in our Wake Up house try to practice sitting meditation together at other times if our work/school schedules allow for it, but there are no expectations about this. We don’t pressure anyone to receive transmission of the Five Mindfulness Trainings, and there are no mindfulness police making sure we are practicing. Our creativity, inclusiveness, and thoughtfulness are given space to breathe. Just for example, we’ve hosted a retreat, meditation flash mobs, and workshops for various spiritual teachers. Furthermore, we’ve started to explore dancing and stand-up paddleboard meditation as well as mindful movie nights. For mindful activities, the sky is the limit.

Living as a community has practical considerations, such as paying rent, working, and going to school. Everyone is expected to pay rent on time. The cost of rent and utilities depends on the location and the house. We usually divide the costs by the size of the room, whether or not two people share a room, and whether or not they have a private or shared bathroom. However, we always allow room for these prices to be renegotiated if people feel they are paying too much; in that way, we can all come to a solution where everyone feels supported and heard. The decision about how to share the costs is one of many activities that makes this such a unique experience. It gives us plenty to practice with.

The people in our Wake Up house try to practice sitting meditation together at other times if our work/school schedules allow for it, but there are no expectations about this.

Learning how to balance practice, school, work, relationships, politics, social activism, etc., is difficult to do no matter where you live, but it is great to have the loving support of housemates who are going through similar things and are open to talking about it. We have had many late night talks, many tears, tons of hugs, and lots of love over the last two years. All of this has brought us closer to one another while at the same time opening our minds and hearts and giving us strength.

The most common challenges that arise are related to cleanliness, support for hosting Wake Up Sangha meetings, expectations, character defects, and emotional maturity levels. Beginning Anew, house business meetings, and lots of loving communication have been the keys to resolving all of these issues. That’s the huge difference between living in a Wake Up house versus living with random roommates found on the Internet; we have common practices that allow us to keep the energy flowing and the atmosphere clear of obstructions.

Much of what we have is a continuation of two other intentional communities. We learned a lot from reading the website of the original Wake Up house in Austin, Texas. We also inherited many practical tools from a Los Angeles intentional community called the Light House. Although its residents did not practice in the Plum Village tradition, their years of experience were so rich that we modeled our house after theirs. They freely gave us some resources to use as templates, including a house manual (which we modify with each business meeting), a guest orientation card, an application, and sublet agreements.

If you look up our website, wakeupsandiego.org, you can contact us and we would be happy to share those resources with you. Beyond the paperwork, a lot of support can be found in reaching out to others who have been down a similar path. So, please, if you desire to live in or form one of these beautiful communities, don’t hesitate to reach out. You will be surprised by how many people want to reach their hands back and help you.

I am happy to report that Wake Up houses are starting to pop up all over the place! Another one just formed in Los Angeles and possibly in Sydney as well. There is talk of others forming in London and the Netherlands. If you want to be the next house shining light in the world, we would suggest starting a Wake Up Sangha first or getting plugged into an already existing one. Get support from other Sanghas in the area. Share your excitement about the idea with others after Sangha gatherings and start searching for that one other person who is just as dedicated to the idea as you are. Then start looking for other prospective roommates!

Nick Neild, Inclusive Action of the Heart, is a native of San Diego, California, and has been practicing with his root spiritual tradition within 12-step groups since he got clean in 2002.

He practices with the Open Heart and San Diego Wake Up Sanghas.