Home Sharings Suffering and Healing Letter to Thay on Diversity 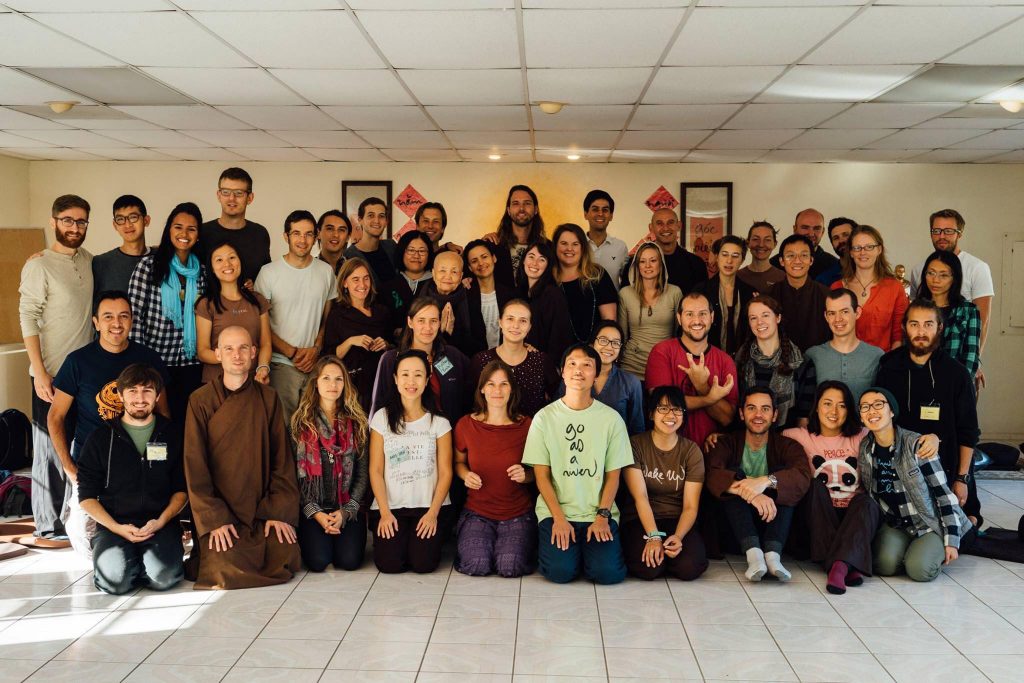 Leading up to my Order of Interbeing ordination at the 2015 Wake Up Ambassador Retreat during the North American Tour at Deer Park Monastery and past personal experiences in both general and Wake Up sanghas, I felt empowered to write a letter to Thich Nhat Hanh and the Plum Village delegation on issues of diversity in the United States. During my retreat this past Fall, there were three highlights that reverberated in my mind after I left.

My three experiences above continue to reinforce further a higher need within our greater sangha(s) throughout the U.S. for more diversity in representation and inclusion. Here is my letter below in its entirety:

As a Vietnamese-American who started on my journey in Thay Thich Nhat Hanh’s Plum Village tradition over fifteen years ago, I have seen many changes and transformations within our tradition. One in particular is the unprecedented and innovative spark of WAKE UP—a movement that have ignited and united young adults all over the globe. What an exciting and monumental accomplishment!! This is a Happy Moment!

However, as more people are exposed to Thay’s teachings and Sangha(s) formed, what I also see consistently is that these communities specifically in the United States are comprised of mostly whites or European-Americans. These are my experiences attending Organic Garden Sangha in Los Angeles, Open Heart Sangha in San Diego, Mindfulness Community of Puget Sound in Seattle, Mindfulness Community of Atlanta, Salem–Oregon, New Orleans–Louisiana, and some Wake Up events here in Southern California. Cities such as Los Angeles, San Diego, and Atlanta are some of the most diverse in the world if we allow ourselves to drive around town or work in some major corporations. We could easily hear a language other than English spoken from one community to another.

Yet, internally within our monasteries and lay communities, such diverse representations among Sangha members are limited or lack thereof. Guests to monasteries such as Deer Park and Blue Cliff’s attending Days of Mindfulness are also predominantly white. One organizer explicitly brought up this issue of lacking diversity during my most recent Wake Up camping trip with Wake Uppers all over California. We both agreed that our demographic represented consisted of half European-Americans and People of Color stemming from various ethnic backgrounds. Yet, the three main outspoken organizers were white males.  Perhaps, it may be time for us to point out the pink elephant in the room and talk about this often time volatile and difficult topic.

Perhaps, it may be time for us to point out the pink elephant in the room and talk about this often time volatile and difficult topic.

Here are a few more observations at various Wake Up events I have seen last year in 2015:

I just pointed out the challenge of the lack of diversity among organizers and in leadership positions despite well-represented and diverse Sangha members at some various events. The other side of the challenge is that filling spaces with people of color, women, or from the LGBTQ community as “tokens” may also be counterproductive. As a Divinity student in my Buddhist Chaplaincy program the past 3 and a half years in Los Angeles, what I also saw was that my classrooms had vast array of students from all over the world. There were women and monastics representing countries covering the entire Asian continent with Buddhism embedded in their countries for millennia.

Yet, the same homogeneous picture presented itself. That despite having such a diverse student body represented and conscious efforts from our professors to garner these students’ participation, the most outspoken students that dominated classroom discussions, projects, and club participations were white males. Here, we see the opposite effect at play—diversity in representation, but homogeneous in voices and life experiences when it comes to leadership and taking initiative. So now it becomes a fine line between diversity versus life experiences. This is a fair question. I mean if a student’s English is barely proficient and his/her formative years of life experience were formed abroad, it is understandable that his/her experience of race, class, power, and oppression differ vastly from native people of color.

After all, these experiences are only found within the United States’ borders. I don’t mean to make an American issue a global one. Perhaps, Sanghas from our European nations may be much more inclusive and diverse. We “Americans” have been dealing with issues of race, class, power, and privilege close to three hundred years on our soil. Now “Americans” are dealing with polarizing issues such as police brutality, school inequity, and mass incarceration, to name a few. These issues are racially charged with potent isolating rhetoric. Again, our issues of “diversity” and the problematic definition behind it may be only within the United States and not necessarily that of abroad.

Now the question is how do we move forward? As a second generation Vietnamese-American who has organized Viet Wake Up tours and retreats specifically for Vietnamese-Americans, I can assured you that these young adults have different needs and life experiences. Now the pivotal questions among them are no longer about sustainable living or consuming organic produces, but rather dealing with cultural gaps between themselves and their parents.

Vietnamese, Vietnamese-Americans, and people of color in the United States have different needs and values. The question of how do we want our future Sanghas to look, feel, and become will eventually come up.

Other pertinent issues common among these Viet Wake Uppers include: having dual-cultural identities, growing up as an immigrant, or choosing a career profession basing on one’s inclination versus our parents’ imposition. In short, Vietnamese, Vietnamese-Americans, and people of color in the United States have different needs and values. The question of how do we want our future Sanghas to look, feel, and become will eventually come up.

If I may, I humbly would like to offer a few solutions:

I will be turn 36 years old in September and know that eventually I will phase out of Wake Up. What I would like to see for the next generation and possibly for my kids in our tradition, is that when they walk into a Sangha, they don’t necessarily ask, “Why isn’t anyone here look like me?” or “Do Sangha members also have life experiences similar to mine?” Instead, what I would like to see is, “This is who I am, let’s walk on this path TOGETHER.” Another aspect is just merely showing up. This explains why I consistently come back to these Sanghas despite their representations of mostly homogeneous white and European members.

What I would like to see is, “This is who I am, let’s walk on this path TOGETHER.”

At the end of the day at its core, it really comes down to using love and understanding as its compass. If we operate from this juncture, who knows, anything can happen. Perhaps another monumental Inclusivity Wake Up?