Azariah, who attended the Wake Up retreat at Deer Park Monastery last month, shares how a Q&A session with the monastics about transgender roles and the LGBTQ community helped him to heal his suffering. 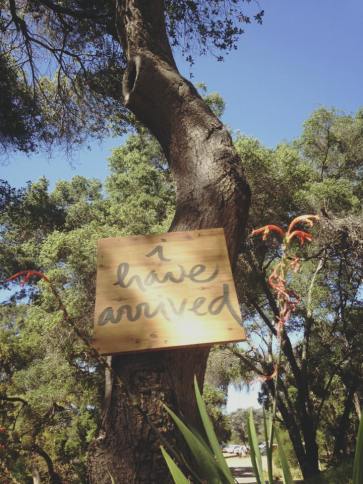 This past weekend [March 30-April 3, 2016] was the most amazing weekend of my life. No exaggeration.

Let me tell you why…

One year ago, I was feeling dead inside. My spirit was dry as the desert. My brokenness was growing like an intrusive ivy beyond myself and started to overtake those around me. My shortcomings were casting a shadow over the person I was once proud to be.

A year ago, I was deep in the dark forest of unhappiness which was caused by no one else but myself. However, while watching Oprah’s Super Soul Sunday, I was inspired to search for a nearby Buddhist monastery. I was hoping my results would yield a solution to my suffering. My Google search listed Deer Park Monastery in the top results. I clicked the link to learn all about Deer Park and its practice of mindfulness in the tradition of Zen Master Thich Nhat Hanh. While I was roaming around the website, I learned they were going to have a young adults retreat the following month called, “Wake Up!” I was immediately intrigued and booked my spot for the retreat that same week. That was in April of 2015. I had an incredible time but that weekend was a mere introduction to the practice and healing which I desperately needed.

I chose to return to the same retreat this year. A year later my situation is a little different because I’m no longer in a relationship, but I was still trapped in the same dark forest of unhappiness; feeling alone, broken, hurt, useless and lost.

Twenty minutes before I arrived to the retreat last week, I ended an argument with a family member saying I didn’t want to speak or visit for a long time. The conversation brought up a lot of pain and I arrived to the monastery feeling very angry. When I arrived I didn’t want to speak with anyone or really even be there at that point. Shortly after arriving and setting up my tent it was dinner time. I was thankful for the required “Noble Silence” during dinner as I was still fuming from the conversation just a few hours before. That night I went to bed still feeling livid. I couldn’t stop thinking that I will probably not talk to this family member for a very long time.

I chose to return to the same retreat this year. A year later my situation is a little different because I’m no longer in a relationship, but I was still trapped in the same dark forest of unhappiness; feeling alone, broken, hurt, useless and lost.

The next day, after morning meditation, breakfast, and working mediation; I made my way to the monastery’s bookstore. I wanted to buy Thich Nhat Hanh’s book Living Buddha, Living Christ (partly because Oprah said she has it on her nightstand). As I was searching for the book, one of the nuns approached me and pointed to a book on the very top shelf and recommended it for me. When I raised my eyes to read the cover of the book it was titled Anger. Part of me felt caught, embarrassed, offended, but also relieved. Will this book contain a path out of my darkness? I don’t know if it’s a book that she recommends to everyone or if my anger was just that evident. I sheepishly and discreetly purchased the book but secretly couldn’t wait to begin reading it.

I made my way back to my tent and began reading the book right away. Once I started, I wanted to consume the entire book and every line which felt like a healing ointment on a fresh burn. The book was opening my eyes to how my anger is a part of me, it’s my inner child which I need to embrace. My anger is the inner child that I need to invite to sit down and eat with me, climb the mountain with me, invite to watch TV with me. Thich Nhat Hanh teaches in this book that we need to care for this child because it is a part of us. While reading this book I started to feel resolve with the anger I arrived with that weekend and I began to come out of my shell and socialize with others attending the retreat. Over the next few days I started to make connections with others. I made myself vulnerable and I began to feel a sense of purpose and belonging once again.

My anger is the inner child that I need to invite to sit down and eat with me, climb the mountain with me, invite to watch TV with me.

On Saturday, the last full day of the retreat, there was a Q&A planned. This was our opportunity to ask any question(s) we were dying to ask a monk or nun concerning the practice. It was held in the main meditation hall. More than 100 of us gathered to sit on the floor to ask our questions and hopefully gain answers to our suffering. Some questions inquired about life after death, celibacy, but the question that stood out was about gender roles and if there is a place for transgender people in this practice. All the questions were echoes from our caves of pain and suffering. This question, although I didn’t ask it, was one I was wondering about also.

The monk who was tasked with answering the question of gender roles and the place of transgender people within the practice gave an answer which raised some eyebrows, unintentionally evoked the pain which we too often ignore and cover up, yet, at the same time created an opportunity of healing I personally did not expect.

While he gave his answer you could feel the energy of the room shift. Several people got up and walked out feeling rejected again by another spiritual community. It was obvious that his answer did not sit well with the majority of the people in the room. Little did I know, this mishap was going to bring about a healing that me and many of my LGBTQ siblings desperately needed.

I felt the pain from the messages of my past, “We love you but…”, “You’re welcome here but…”, “You can practice with us but…”.

Personally, as I sat in the big and open mediation hall listening to his answer, I felt the pain from the messages of my past, “We love you but…”, “You’re welcome here but…”, “You can practice with us but…”. The mediation hall which once felt full of love and joy was suddenly becoming hollow. Having been rejected in the past by my faith community for being gay, I couldn’t help but feel the same despair again. It felt like the spiritual community I was willing to trust again and become vulnerable with was going to keep me locked outside. However, in the midst of all these feelings I invited the children (anger, sadness, despair, and rejection) to sit and breathe with me. Together we breathed and I put the children to bed. I chose to understand that this brother answering the question is not originally from America, English is his fourth language, and comes from a culture that has long ignored confronting LGBTQ issues. Within that context, the answer was a little easier to hear but still not easy. More than likely, it was nothing more than a cultural misunderstanding and poor choice of words. However, the familiar pain it raised was real.

Having been rejected in the past by my faith community for being gay, I couldn’t help but feel the same despair again.

After the Q&A, our day continued as planned.

After lunch, one of my new friends asked if I was going to go to the LGBTQ breakout group. “There’s a LGBTQ breakout group?” I asked. One of the nuns had planned this breakout for those who wanted to express their feelings and thoughts concerning the answer the monk gave about LGBTQ people within the practice. Without hesitation I agreed that I would be there.

Dear god. Am I glad I went.

There we were. A good number of us gathered in the circle garden sharing our stories, pain, and concerns. I shared with the group about how I went through five years of ex-gay exorcisms and am still hurting from the blunt force of rejection from my past faith community and leaders. I expressed that I wanted to trust a spiritual community again but was scared and now I wasn’t sure if I could.

As we approached the end of our sharing, the nun who organized the event shared a story with us.

The sister shared about the time she visited a Christian monastery. While she was there, a priest shared with her the story of how a woman came to him and told him about the sexual abuse she experienced by her Catholic priest. Moved by the story, and wanting to help relieve her suffering, this priest she was confessing to knelt down on his knees and kissed her feet. An act of humility and kindness which helped the woman heal from her pain. After sharing this story, the nun asked if we would allow her to touch the earth for us. Not entirely sure of what that meant or how much it would mean, I nodded in agreement with the group.

The sister, with a shaved head, wearing a long brown robe, took her sandals off, stood up from her chair, walked to the center of the circle and knelt to her knees. She slowly put her face on the ground covered in pine needles and mulch, stretched her arms out before her and she stayed there. Then, the healing began.

As she touched the earth for us, like a film, all the past rejection I received and felt from my faith leaders played in my head. All the hateful messages. The exorcisms. The manipulation. The lies. The spiritual abuse. While she remained faced down on the ground before us, the images I was seeing turned from color and faded to black and white. The messages I was hearing in my head started to become mute. The anger I didn’t even realize was there matured to forgiveness and resolve. The pain faded away. The power of the past died.

She touched the earth for us.

The anger I didn’t even realize was there matured to forgiveness and resolve. The pain faded away. The power of the past died.

A leader within my new spiritual community chose to humble herself and care for us instead of ignoring and rejecting us. She chose to be the doctor who saw our suffering and offered a cure, unconditional love and kindness.

Others in the circle began to weep and cry.

This was a holy moment.

As I replay it in my head, it remains a holy moment and one I keep revisiting since it happened.

It gives me hope.

It brings me healing.

It has given me a path out of my dark forest of unhappiness.

This was, hands down, the best weekend of my life. I arrived angry, empty, and dry but I left feeling healed and full.

This is the reason I love Jesus but I follow Buddha.

Azariah is on a journey to undo all that is selfish, lazy, over indulgent and fear based in himself. Welcome and feel free to contribute.