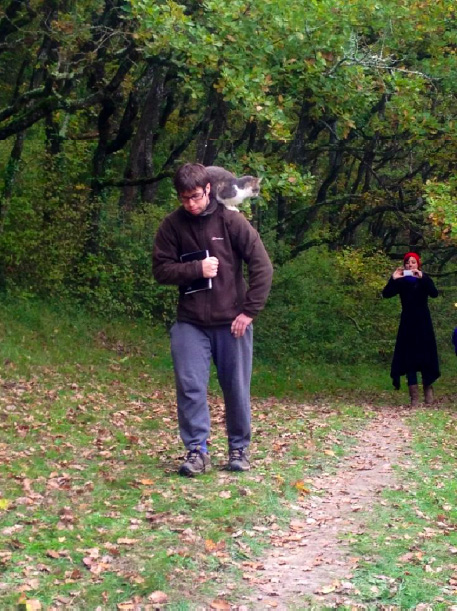 In the words of Rumi, ‘Beyond our ideas of right-doing and wrong-doing there is a field. I’ll meet you there.’ Such a field is often discovered in Plum Village, and it is like dwelling in a Pure Land.

When I arrived at Plum Village I didn t see a Pure Land. By the way, my perspective of Pure Land is a state of mind rather than an idyllic location. There’s a song here that goes ‘heaven and hell I know equally well, the choice is up to me.’ Initially I found it difficult to accept the more uncomfortable aspects of living here. I made a long list in fact.

Initially I was uncomfortable being surrounded by thick and sticky mud, especially tiptoeing around it to get into the shower cubicle. Later in the retreat I made friends with the sticky mud. I remember enjoying a walking meditation through the thick of it, there was no discrimination against the mud. I thought it was funny when I got stuck in the clay mud literally while relieving floodwater on the farm. The only difference was my state of mind; suffering became transformed suffering. Acknowledging and embracing any suffering that arises makes transformation possible. I have many more scenarios to mention.

I slept in a dorm with eleven other men. I disliked the lack of space, fresh air, and quietness for a while, but gradually as we dispersed I was sad. I remember being sad that I no longer needed my ear plugs to sleep once one of the men left. Even during the retreat I remember leaving the room and really appreciating the fresh air!

I had resistance to the winter retreat boundaries, but as a consequence it felt like our collective energy developed momentum. If the retreatants had regularly ventured beyond the boundary the energy that we cultivatedwould have dispersed somewhat.

I was a little uncomfortable with the lack of organization and apparent absence of forward planning, especially at the beginning when orientating myself with the new set-up. But the rather relaxed attitude was part of the practice. One time a monastic brother suggested that it was more appropriate to arrive late in a slow calm manner than on time in a fast agitated manner. Many times we rush around out of habit, which is the energy of society.

Waking up regularly at 5.15am was challenging throughout, but when I managed it I felt so much better for it! The countless beautiful skies, crisp fresh air, the beautiful sunrises, the daily dawn choruses etc. It felt like there was a lot of powerful energy in the arrival of a new day.

The lack of internet was frustrating at first, but I came to realize how much time I wasted on mindless surfing. Instead I enjoyed playing table tennis and just hanging out with people – time well spent. A related issue was not being in contact with friends and family back home so frequently, but it meant that I shared more deep and meaningful communication with them as a consequence.

I remember being agitated by chit chat everywhere, when what I wanted was noble silence. I also wanted personal space. I even wore a ‘noble silence’ badge one day. But I ended up going with the flow and stopped resisting. Later a newcomer mentioned the same issue to me, and I realized that I had joined the flow of the Sangha – not standing against the current. I had some really interesting and valued conversations as a consequence.

I realize that sex is considered a taboo topic of conversation in polite society, and I discuss it here because the consequences of not discussing powerful sexual energy can result in subsequent unnoticed behavioural patterns which cause suffering. There was only female companionship for three days a week, which I didn’t like initially. I enjoy female company for several reasons, some reasons more wholesome than others.

Regarding sexual energy, not having an orgasm for the three month duration was quite a revelation actually. I didn’t think I could do it, but I did. As a result my energy level was generally higher as a result.

Initially there were a lack of food treats, and I remember my reaction when some coconut biscuits manifested while I was looking after the tea table. They were supposed to be eaten for special occasions, and this was a challenge because I knew how nice they tasted! Later, during the Tet festival feast (Far Eastern New Year celebration), and on a visit to Bordeaux I certainly made up for this lack of consumption. I realized how my craving mind, when given an inch takes a mile.

Lastly in this list, having mice in my bedroom was a big deal initially. But we were upset when we squashed one by accident when trying to relocate him or her. Sure enough another moved in, and it was quite a joy to see the new arrival.

Being able to ‘let go’ of wanting things a certain way has been essential in order to access peace and contentment, which is essential for dwelling in the Pure Land, or Rumi’s field.

Breathing in, I know I can let go of all obstructions to freedom

Breathing out, this is freedom (Vimukti)