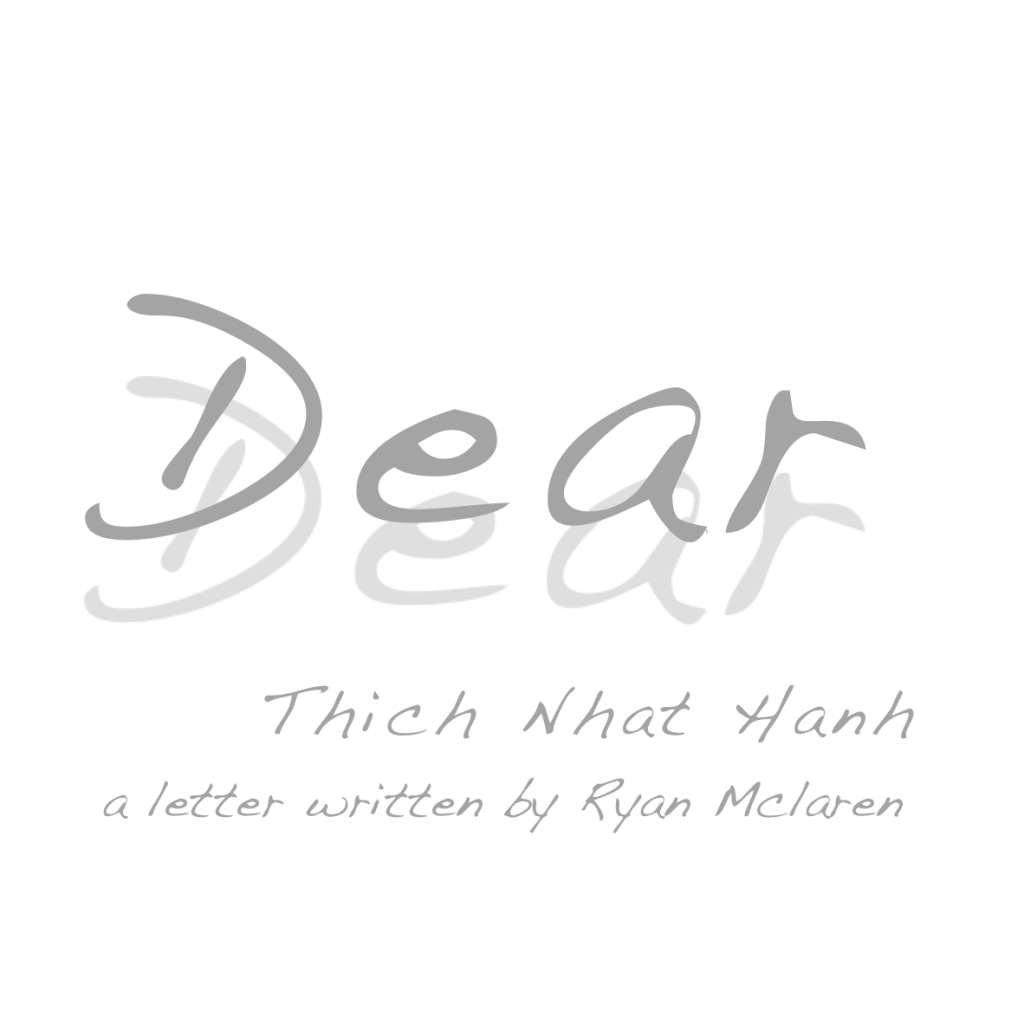 First and foremost, thank you for everything. And Nothing, for that matter. We will probably never meet, but I will be eternally grateful for the work you have done to bring mindfulness to the west. I was in a dark time when I first encountered your teachings at 22.

I was an Atheist of the most cynical form, though I was curious about meditation and what it might offer me. Leaving your Deer Park Monastery after the five0day young adult retreat in 2012, I thought that maybe I had just encountered a cult, though I would have thought anybody who had devotion to something beyond themselves was suspect, such was the state of my darkness.

At the end of 2013 I went through a challenging experience that forced me to question my cynical worldview. Due to choices I made, I ended up homeless, living out of my car for several months. Eating meals at a soup kitchen, I became sorrowful seeing the suffering manifest in the people surrounding me. I developed a level of loving-kindness for my fellow human. My own suffering forced me to fall back on the meditation teaching I had learned from your monks and nuns sometime before just to surmount the perceived hopelessness of my situation. Even though I was not ready for the full blossoming of such teachings at the time I first learned them, those lotus seeds finally took root in the mud that my life had become some time after I left the monastery.

I eventually transcended that challenging experience, but the lessons I learned while at that low point have stuck with me since. I returned to your monastery in the summer of 2014 with new eyes. I once saw your group as a negative, but now I saw a sangha of people supporting each other. I was surrounded by a community of people singing and meditating together, each lending and taking strength from and to each other in the most earnest of fashions. I learned that we are all suffering and that we are all capable of loving-kindness. Before, I was so afraid of my fellow person due to the hurt I carried, that I ignored the beauty surrounding me.

I have since been to two more retreats and plan to go on several more. I have found a local sangha in your tradition in the Bay Area. I meet with friends to meditate and surmount the life challenges that everyone faces, together. I have learned so much and softened my rough edges.

Thay, you are not the end-all-be-all, but you have started me down a spiritual path, for which I am eternally grateful. I know you are struggling with your health now at 89, I only hope that you face whatever comes with peace.

With love from your student,

Ryan McLaren is a part-time student at San Jose Sate University. He pursues several passions, including meditation, music and martial arts. In 2015, after recovering from elbow surgery, he became a bronze medal national champion in the 198- pound novice division at the Judo Senior National Championships in Irving, TX.

This was originally published by Transportation Press