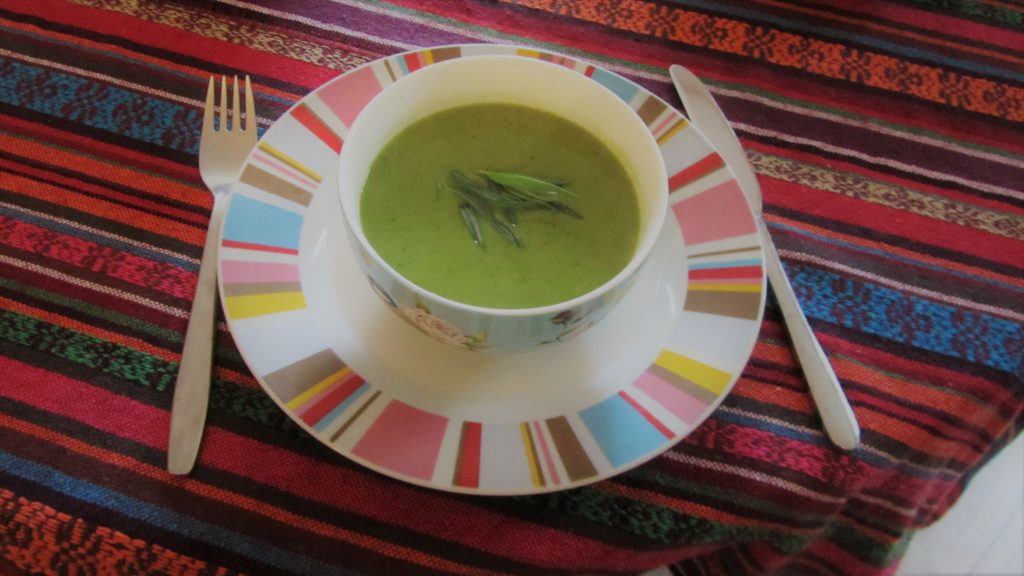 It is that time of year again… broad bean time! It makes me so happy! Last year, on one of the hottest days of the year, I made a memorable soup with broad beans (fava beans). I was surprised by the taste of fresh tarragon in the soup, and I didn’t know it could taste like that! Fresh, salty, green with a little “zing” from lime zest and juice, complemented by the deep anise-like taste of terragon… it was so different from the flavours I was used to, but it was utterly delicious!

I used my fingers to clean my bowl—I really did. Yes, I even dare to admit that online, hoping it convinces you to try this recipe! Soup is a tasty dish all-year round, of course, but this recipe is very suitable for the summer season. You can even eat it cold, which is just as amazing.

This was the first recipe I tried from Sarah Britton’s, a Canadian food nutritionist and blogger who is currently living in Denmark, whom I became a huge fan of afterwards. My New Roots was her first cookbook from where I took the recipe. Sarah Britton manages to create super healthy and tasty plant-based recipes with plenty of vitamins and proteins, and—above all—manages to explain her food philosophy clearly. The only negative remarks My New Roots received were that it was rather too good, or rather too exclusive. Some of the ingredients Sarah used were hard to find in regular supermarkets as they would only be available in organic supermarkets, and that would influence their price…

But Sarah attentively listened to her fans, and this year she published a wonderful new cookbook Naturally Nourished with ingredients where you can buy in almost any store. Its recipes are a little more simple as well, which makes them more accessible to cooks who aren’t so familiar with plant-based cooking yet. I found My New Roots a bit more inspiring because I noticed that most of the recipes from Naturally Nourished were already in my repertoire, in some form or the other, as I have been cooking many vegetarian / vegan dishes for over 10 years. If you’re interested, you can visit her blog at www.mynewroots.org.

To come back to the topic: broad beans! This year, the start of the broad bean season was extra special to me because for the first time, I grew them myself on my balcony 🙂 My plants produced too little beans to make the soup (see pictures below), so I ate them just slightly cooked, with some (vegan) butter and sage. Yet, I recommend trying the soup! Here’s the recipe. You can make it with frozen broad beans or frozen garden peas. But at least try to get your hands on some fresh tarragon: it is really worth it!

Fill a large bowl up with water and ice cubes and put it to the side. Bring a large pan of water with quite some salt in it to the boil; then add the broad beans (they can still be frozen). When the water starts boiling again (if you use frozen broad beans, this can take a little while), let the beans cook for about 2 minutes. Then quickly scoop them up from the pan and put them in the ice water straightaway. Let them cool down for 5-10 minutes and then pour the water. Carefully squeeze the innermost beans from their shell and put them to the side. You will not need the shells anymore. Please compost. 🙂

In a frying pan, heat the oil and add the chopped onions and a pinch of salt. Fry the onions for about 5 minutes, then add the garlic for another 1 to 2 minutes, until golden. After that, add the vegetable stock and the broad beans (if you like, you can keep a few separate to use as a garnish). Bring the stock to the boil and let the soup simmer for about 10 minutes until the beans are thoroughly tender. Then add the frozen garden peas and cook them along for another 2-3 minutes until they are fresh and green (please make sure you start counting the minutes, after the water is back to the boil).

Mix the soup with a blender. Add half of the tarragon, the lemon juice, and the lemon zest. Mix until you get a smooth, creamy soup. Keep adding the rest of the tarragon and some extra salt, until you like the taste (keep mixing in the tarragon!). Pour in bowls and garnish with some cooked broad beans and some fresh tarragon, as well as a few sprinkles of olive oil.

This article was originally posted on wkup.nl 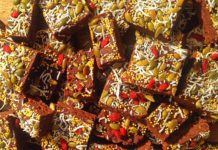