Home Sangha of the Month Wake Up Mexico City

Sangha of the Month for March 2016: Wake Up Mexico City 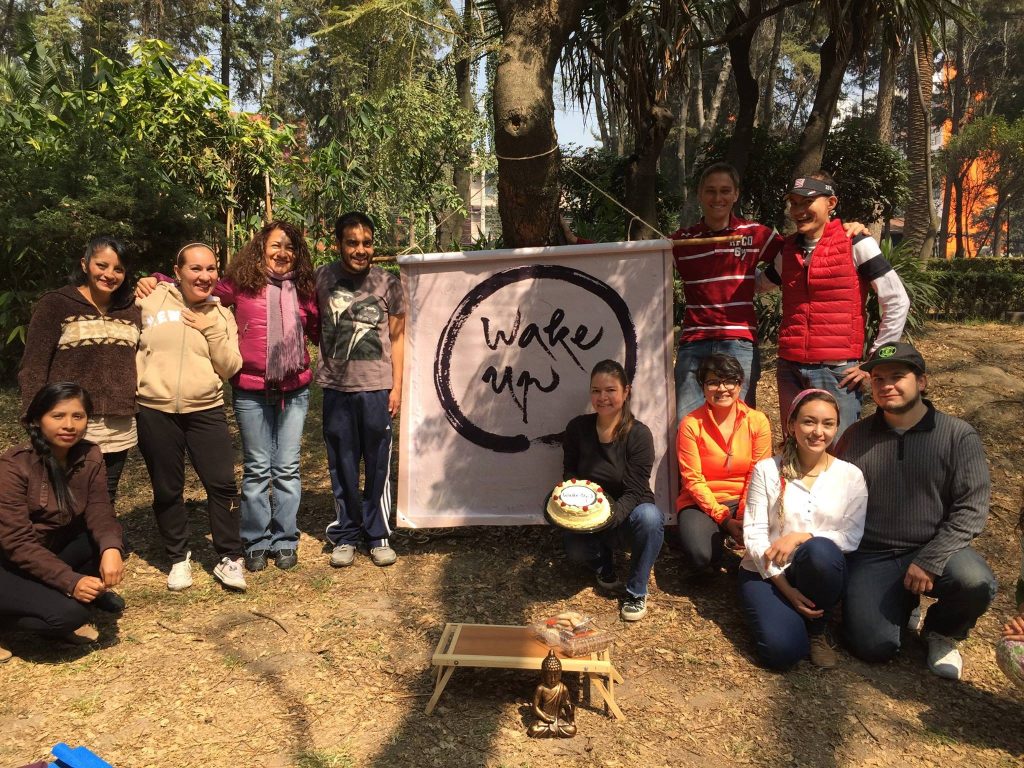 NM: Can you tell me about how Wake Up Mexico got started?

R: I had met the practice in 2008. I took a year off, and I was traveling around Southeast Asia. I was first in Nepal on my trip. I was doing a 3-month silent retreat, and while we were having a teaching about the Buddha’s life, a nun recommended, Old Path White Cloud by Thay. During this silent retreat you can’t do anything except meditate; you can’t even talk. But you can read Dharma. So I read that book in the library and fell in love with Thay. Then I read like 20 or 25 more books from Thay, and that’s when I became like *laughs* Thay’s groupie.

After that retreat, I came back to Mexico and found a small Sangha called Las Flores in Mexico City. From July 2008, I started practicing with Las Flores Sangha, and in 2009 I came to Deer Park for the US Tour. That was when we had the first Mexicans ordained in the Order of Interbeing (OI). We had two: Dario in Tijuana and Lorraine who runs Las Flores Sangha. I was there at the ceremony, and I told Lorraine, “Someday, I will follow your steps.”

The next year in 2010, we had the first monastics come to Mexico to lead an all-age retreat (there was no Wake Up at the time). There was this talk where some people shared their experience in becoming an Order of Interbeing member, and I thought, “Well, I want to become an aspirant!” So I became an aspirant in 2010 and went through the mentoring process. In 2011, I was ordained as member of the OI at Deer Park, same year as Joe Reilly and Marc Jantzi. We’re the Ocean family. My Dharma name is True Ocean of Freshness.

NM: Are there any other Wake Up members in Mexico who are OI?

R: No, no OI aspirants yet. They’re all beginners in Mexico City.

R: Well, we started having retreats at least once a year with the monastics. The Latin American tour was in 2014. Steven (from the Netherlands and Wake Up London) was in Mexico at the time and came to the retreat, and he encouraged me to start a Wake Up group. So I started Wake Up with Steven, and he was the one who really helped me to start the group in February 2014. That was how Wake Up Mexico City was started.

NM: You currently meet once a month?

R: At least. Sometimes we meet more than that. For example, we did this hike that took all day, and we didn’t want to make that our “meeting” so we just met another time that month. Sometimes we might do a Day of Mindfulness, so we’ll end up meeting more than once a month. When we have free time, we’ll think, “Oh, shall we meet another time?!” and we’ll do it! But it’s hard to commit to more than once a month because we’re busy.

NM: Where and when do you usually meet?

R: We meet on Sundays 10am-12:30pm. And mainly at the park…only when it’s raining or bad weather do we move it. On Days of Mindfulness we meet at Las Flores because it’s a very nice place. But mainly for all of our other sessions, we meet at the park.

NM: Tell me about the people who attend.

R: We have about 15 people who attend. With 3 core members…though there are two other women who are slowly becoming core members. Most of them are in their late 20’s and 30’s. They’re mainly working, and we also have some single moms.

NM: Do they come with their children?

R: Sometimes, but mainly not. I always tell them to bring them…one member has a 7 year old. And he just comes and plays around in the park.

R: Not yet. *laughs* Sometimes, older people show up, and we’re inclusive to invite them to stay. But they usually come for 2 or 3 times in order to give us space. But for example, May 10th is Mother’s Day in Mexico. So we asked people to bring their moms. I brought my mom! We had the same meeting format, but with our moms. And in December 2014, for our last session of the year, we invited the all-ages Sangha to come. There were like 40 of us!

NM: Wow it’s so nice! Do you guys bring food and have lunch?

R: No, the thing is in Mexico, we don’t have “lunch” time. Instead, 2pm is our big meal. So we like to end around 12:30 because some members have their own family meals. But Miguel and I bring tea. So we ask people to bring something to sit in the grass, a hat if it’s sunny, and a cup because we don’t use disposable cups. And we bring hot water and tea bags. So, for the Dharma sharing, that’s when we serve tea.

NM: Do you serve snacks?

R: When people ask me if they can bring something, I usually tell them, “If you want to bring something, you can bring flowers or a snack like cookies and fruits.” And some people do. I just focus on the tea because it’s a lot of stuff to carry around *laughs*. We also bring this Wake Up banner that we hang on a tree. The design has the Wake Up calligraphy on it in English. Some people have asked why we don’t do it in Spanish, but since Wake Up is international, it’ll be easier to find us on the Wake Up webpage. I think most people here in Mexico City can understand “Wake Up.” When the tour came, they called it Vivir Despiertos. On the webpage, I put “Vivir Despiertos” in the background, and the front has “Wake Up.”

NM: What kind of things do you do outside of your monthly meetings? 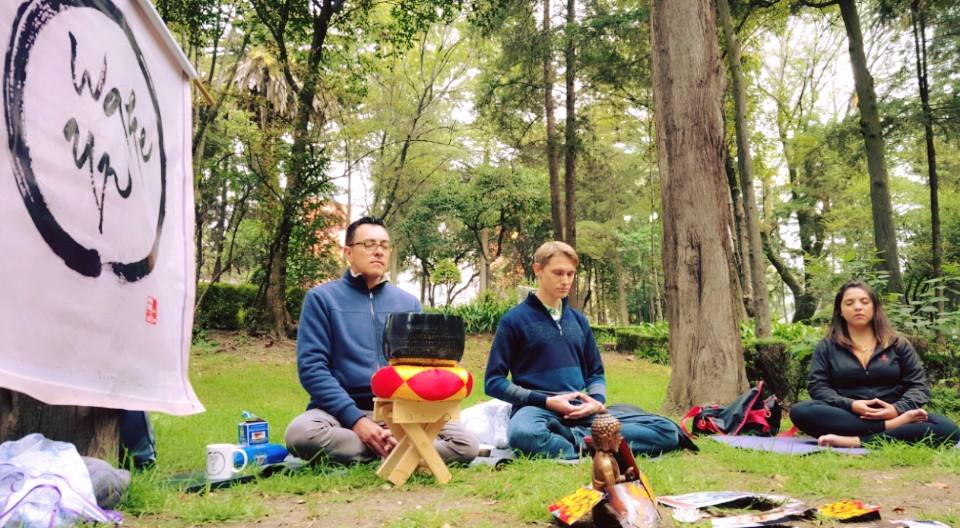 R: We’re socially involved, like doing the Forest of Interbeing project, peace marches, and the yoga classes. We also do hikes and Days of Mindfulness. Those are mainly the extra things that we do.

NM: Is there anything else you’d like the international Sanghas to know about?

R: Well, not really…maybe that we’re a very new Sangha. We’re mainly beginners. If we could find a way to receive support…like helping to cultivate more Dharma teachers or support with translations… because most of us don’t know the practice. Because of that, our sessions are very basic. Many people are very new to the practice…they have never been to a retreat or a monastery. Many don’t even know the monastics.

NM: Thanks Rogelio for your time! So exciting to hear things happening in Mexico, and we’re certainly here for you.

For more information on Wake Up Mexico City, you can visit their website at wkupmx.org.

Click here to read for the second part of this interview, the Wake Up movement in Mexico.