Home Sangha of the Month Wake Up Cambridge

Sangha of the Month for November 2014: Wake Up Cambridge 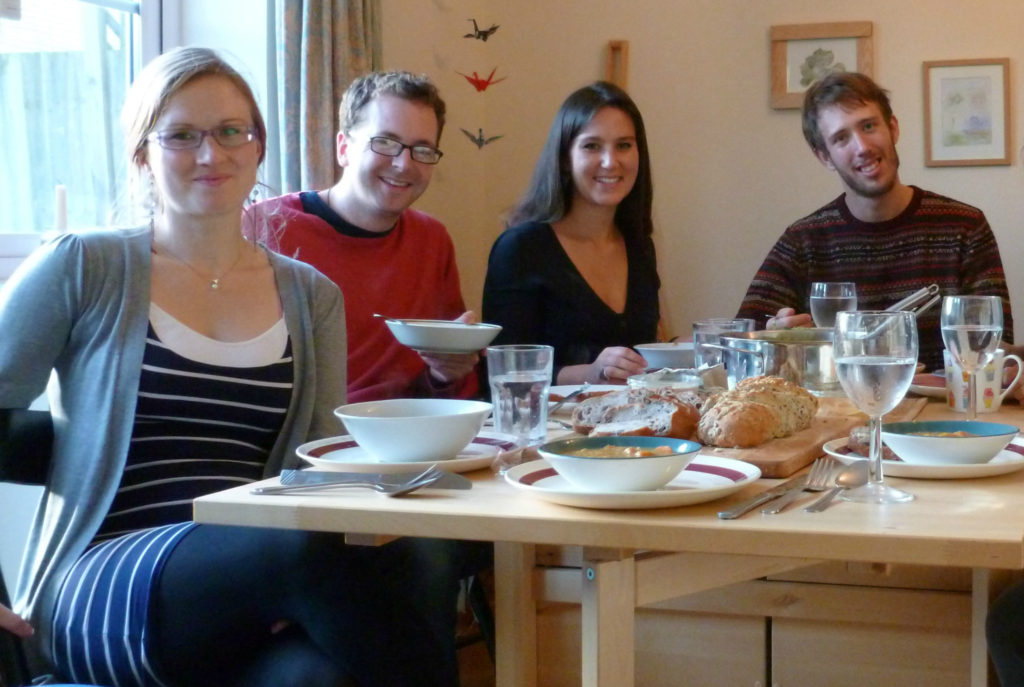 Who forms Wake Up Cambridge?
Giulia: We have a mixture of students from Cambridge University and the town itself. We have quite a full age range. One time, there were 10 people and only one English person (laughs). Maybe lots of people who come once, want to learn how to study better and be more concentrated, but they realise this is not what we offer. Others come and go. We have a group of really core stable people; friends who welcome other people who’d like to stay in the Sangha.

We don’t advertise. We do it through word of mouth. People often come along with their friends, and they like the Sangha and stay.

How did Wake Up get started in Cambridge?
Patrick: I moved to Cambridge about six years ago. We’ve done some things associated with Wake Up, such as the first Wake Up UK tour with the monastics from Plum Village which first came to Cambridge for a mindfulness event. There was also another Wake Up tour in 2012 and the monastics also came here, too.

All this time I was trying to spread the word about mindfulness to people, but it never took off. Then a couple of years ago, Giulia, Helena and I started to form a group. We knew each other and we practiced together sometimes. We helped to organise the Cambridge section of the Wake Up UK tour and decided to start Wake Up Cambridge officially. We knew a few people, but we were not a regular group.

It wobbled around for a bit. We weren’t sure who we were and what we were doing. The people who came varied massively. Then Helena and I left. The past year, the Sangha really flourished and became stable.

Giulia: It’s not because you left us. (laughs)

Patrick: (laughs) It’s quite a trend in my life that when I leave, the community tends to form a bit better. Wake Up Cambridge really grew over the past two years.

Giulia: A big part of last year was that I was the only one leading the Sangha with the least experience. Tomas was around for a bit and had been coming for a year. Then a friend found us. She was like, “I’m so happy I found this group. I will come every week forever!”

Even the times I wasn’t sure if I had the strength to do it, this friend was there.

Giulia: It’s one of the hard things about Cambridge. It’s full of students and they stay for only a year.

Patrick: And everyone is so convinced that they’re all busy.

When and where do you meet?
Giulia: Patrick and I live in a Christian community and we host the Sangha on Tuesday nights at 8pm. There people want to form friendships and spend time with people with learning disabilities. We think it’s a really nice place to be part of the community and be socially engaged, which it’s also a big part of the Plum Village tradition. We also thought it was nice to welcome somebody in a home which could convey that it’s not a class we’re offering. it’s a space to practice together and create friendships. We have freedom to stay for as long as we want and chat. It’s more cozy. It gives a different atmosphere.

On average, how many people come to your Sangha?
Giulia: The number of committed core regular members seems to be growing slowly. For most meetings there are about 8 of us, but we have many more members who come whenever they can and we regularly welcome new members.

How are your gatherings?
Giulia: It varies. We meet for about 1.5 hours. If there are new people, we first introduce them the Plum Village tradition, explain mindfulness and do a round of names. Even when there are no new people, we pass around a glass and whoever holds it says an animal he/she feels like at the moment to start getting in touch with ourselves. Then we have a reading. Most of the time, we do 20-25 minutes of sitting meditation. We now have a room that’s big enough to do walking meditation or deep relaxation. We always conclude with a Dharma-group sharing.

Recently we started singing songs at the end of the session. For a while, it has been mostly me facilitating the session, but now we give a chance for new people to facilitate. It’s been a learning process for us. So our Sangha is a bit more varied.

Last year, we did a lot of Tai Chi, but that was on Saturday mornings. Tomas has been doing this for 10 years and he’s been teaching us. We also meet regularly for socials, mostly to share meals.

What makes the Sangha special to you?
Patrick: After years of forcing something to happen that was never about to happen, it feels wonderful to be held by the Sangha and just flow with it. The major bit is the friendships. The group is very welcoming and inclusive. It holds people beautifully. There is a lot of love and support.

Giulia: The Sangha last year has been like a family. It was really hard a year when Patrick was gone. It was really good to have this stable and loving, caring presence where I can be open. It’s been amazing to see the sangha grow. Sometimes I like discipline because it’s hard to sit down and meditate on my own.

It feels so special that there’s a wave behind me as well with all this energy. There are many people who are excited with all the things we can do. It’s wonderful to spend 1.5 hours together every week to create all this passion, community, energy and ideas. Some of the Sangha friends whom I feel closest are my friends for life.

Note: This Sangha is currently inactive.