By Wake Up Belgium friend

Dear friends.
You have given me such treasure.
I love you so. 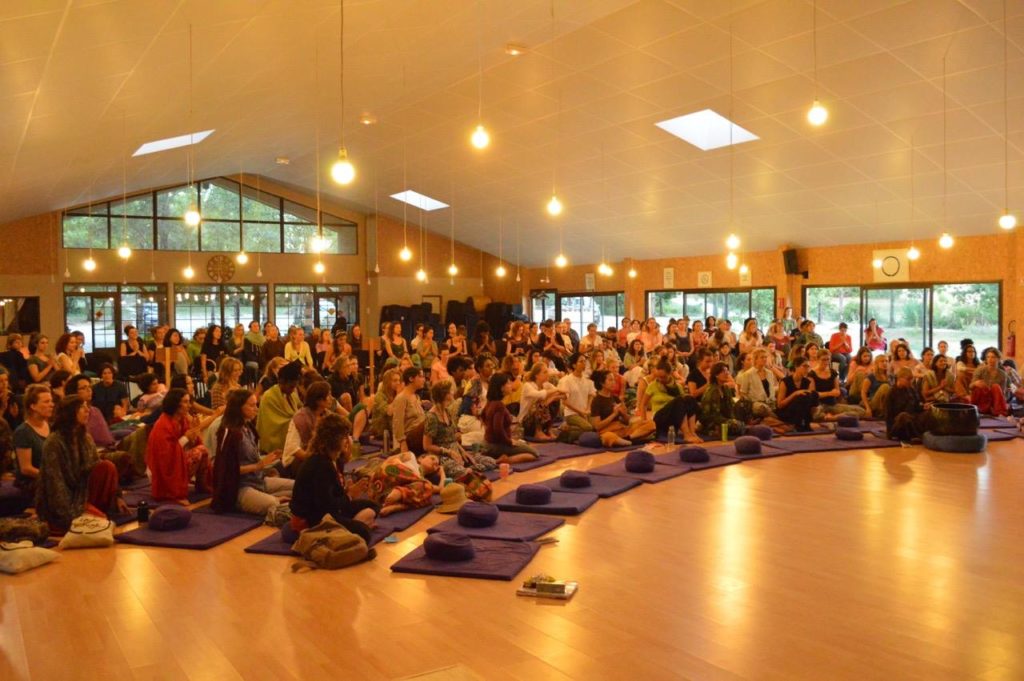 Last summer, I discovered the wonderful world of mindfulness. It has given me the strength to live and see negative feelings as positive feelings. There was a very steep learning curve, but I feel like the hardest part has passed.

I had spent a week at a Plum Village in the south of France for a retreat. The theme of the retreat was “Wake Up Earth” to wake up young people from having automatic behaviors and hiding feelings. Plum Village is situated in the middle of fields of sunflowers and grapes. After a few days, I realised it looked quite similar to an ideal dream future I had drawn a few months earlier.

In short, it was a wonderful experience. Being able to share feelings with others with fewer inhibitions made me feel very connected with humanity again. I am not alone in my feelings; I just didn’t know that there were many sharings about them. I loved everyone I met, and I’m sure the ones I didn’t meet were loveable too.🙂  I felt great connection with my Dharma sharing family Big-Hearted Bumblebees, and I’m lucky to have met each one of them. I am grateful that I was able to learn from them and that they were able to learn from my experiences.

One of the things I had realised was that everyone is beautiful in his or her own way. I’ve never felt like anything in nature is ugly. For some reason, there are people who don’t like nature or aren’t amazed as much as I do. I often hear “That’s just the sun” or “That’s just an animal; that is normal here.” I have always wondered why these people don’t see it as I do. I’ve rarely felt that these words were true, or that nature is nothing special. How did I ever start to believe that humans – also creations of nature – can be ugly? Somehow these thoughts made me see the beauty of everyone, including me. It was like an aha moment when I saw myself in the mirror and thought “I look beautiful.” I hope others can see this too.

The monks and nuns at the Village shared their wisdom with us everyday, and I was often amazed. For one of the Dharma talks given by Sister True Dedication (if you don’t have time to watch the entire talk, then the insight I got started at around 21 minutes, but Sister True Dedication’s talk is definitely worth 50 minutes). I learned that discrimination, hatred, and misunderstanding are often caused by previous suffering of people either from their own experiences or by their ancestors who passed on their suffering through upbringing. Thanks to this, I found a reason to be less frustrated and angry by other people who cause great suffering in me. Somehow, it’s given me strength to endure more and try to be more understanding about why people do certain things.

It was also my birthday on the last day of the retreat. I must say it was the best birthday ever. Starting the day at 5.20am, taking a walk to Upper Hamlet, and enjoying a sitting meditation at 6am was a good start to my day. A small nap until breakfast at 7.15am was necessary as I went to bed quite late (at 11 pm 😀 ). I enjoyed eating at Plum Village a lot. I learned that I had some fear of overeating because we ate in silence, and I had no way but to feel what was there. But it felt good to realise that because I found the reason of avoid eating mindfully at all cost. Another challenge of eating consciously (and vegan) was that I felt hunger before and during every meal. I usually feel hunger every few days because I’m too stressed, so it was a very pleasant surprise! Waiting a few minutes before eating made me enjoy the food even better, so the taste was good every time. 🙂 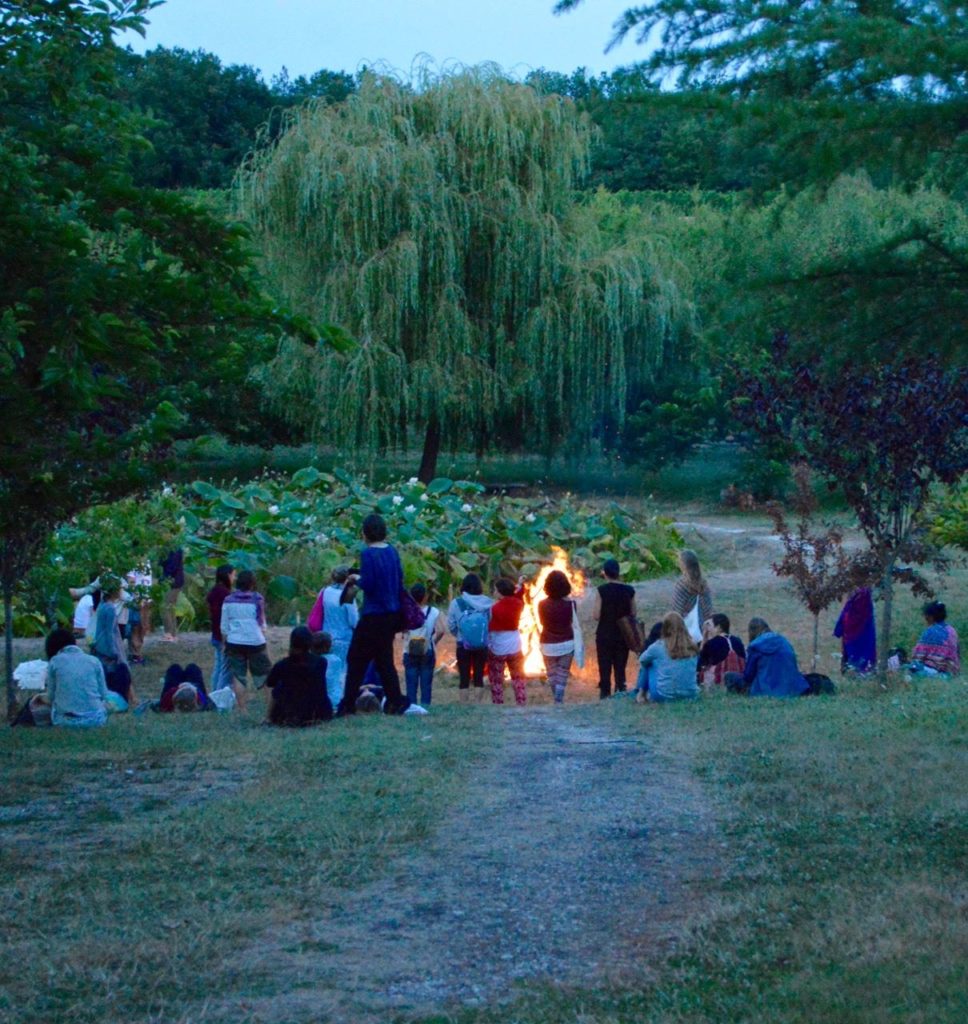 That day I thought, “I don’t want to talk about negative feelings today. It’s my birthday so there must be only happiness.” I acknowledge it, tried to not push away non-positive feelings, and talked to some people. It made me realise that as soon as I tried to embrace them, they dissolved and stopped bothering me because they were finally heard after years of oppression.

I had three birthday parties, the first one with my Sangha Wake Up Leuven. It was heartfelt to have the people who introduced me to the Plum Village practices around me and to share a meal with them. I got beautiful flowers as decoration for the party, some chocolate and oreos to share, a deep-from-the-heart card. I appreciated their presence and smiles. I made a great speech without feeling the overwhelming stress and shame I usually feel.

The second of my birthday parties was with my Big-Hearted Bumblebees Dharma sharing family. They sang “Happy continuation” for me because birthdays are continuation.😛  Then there was sharing about me from some members, and it felt like they truly understood my soul. From them, I got the great gift of acceptance and love (and some vegan cake, chocolate and chocolate milk).

The third birthday party was the Earth Festival with performances from the participants. We were sitting next to the Buddhas on a small hill in the woods. The performers were standing a bit lower, and there was a beautiful bamboo decoration in front of a field and forest. There was a moment of small singing and dancing together, and I met my fellow birthday partner to wish a happy birthday. 😛  One of the brothers read some of the love letters written to Mother Earth and the silence of everyone listening showed the respect all of us had. After this, there were people hugging our friends.

A few of us went to star-gazing. Sentences like “Do they even know what seeds they are watering while drinking alcohol?”, “I don’t think that was a falling star, it was a bug”, “I just checked in for my flight” and “The starry sky is like a dark plastic cover with holes in it” were the tone of the conversation after some silent star-gazing, and this still made me giggle. On the way back to my accommodation, I met probably the only person on the road, and we almost bumped into each other. It was a nice ending to the evening. When I was lying in my bed, the Wake Up song was stuck in my head.

I enjoyed every day of this mindful retreat, and I am already looking forward to the Wake Up retreat next month in Plum Village.