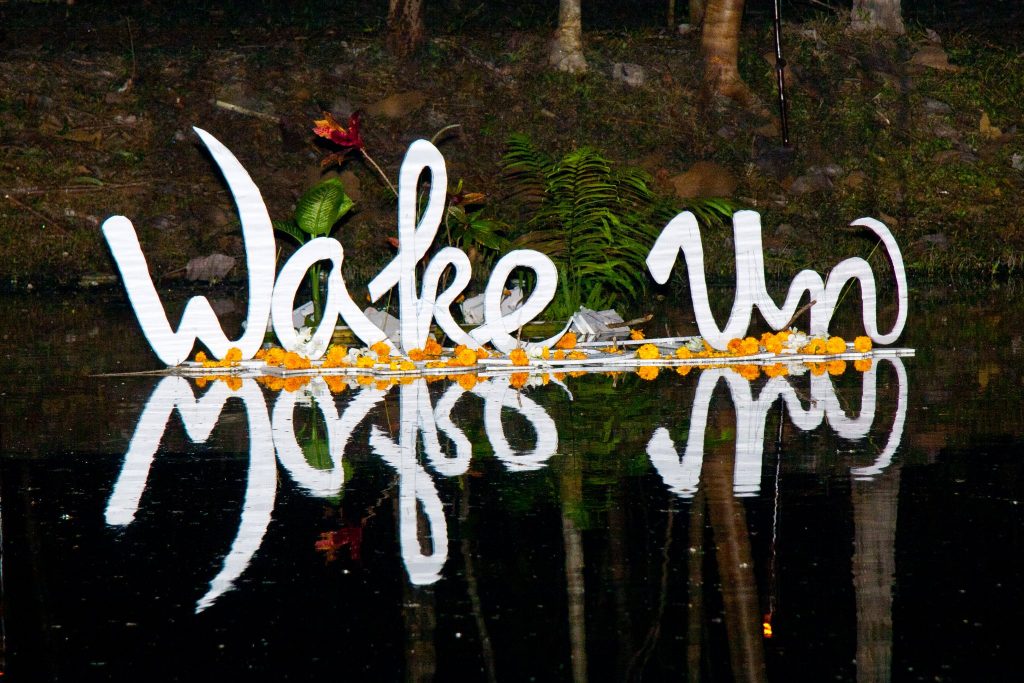 There are hundreds of amazing young adults all over the world who are practicing mindfulness by leading healthy and compassionate lives. They have been to Plum Village practice centers or mindfulness workshops and have decided they want to bring this practice into their everyday lives in small and not-so-small ways. We call them Wake Up Ambassadors, and my job is to support them by listening to them, connecting them to each other, and finding ways to help them manifest their deep intentions.

How sweet of a job description is that!

The Wake Up cosmos is vast and encompasses much more than what I have seen. Still, I would like to share about some of the Wake Up efforts I’ve been a part of over the past few years, to add to our sense of collective identity and perhaps inspire others to get more involved.

It all started for me in 2011 after Thay’s North American tour. There was a massive Wake Up Tour on the East Coast of the US that fall, with almost a dozen monastics and several lay friends. That was my first encounter with Wake Up; I was hooked. After the tour I went to Plum Village for the winter, looking to find ways to get more involved with Wake Up. From being on tour and spending time in the monastery, I was able to witness firsthand the challenge the monastics faced in supporting young people out in the world. When they are at the monastery the monastics have many important responsibilities and limited Internet time. It seemed conditions were ripe for a kind of bridge between the Wake Up community and the monastics. The lay coordinator position was born.

Our first year essentially focused on finding out who was already doing what. We weren’t putting energy into creating anything new; rather, we were just capturing what was occurring and who was doing it. The two major initiatives that spawned from this phase were the Wake Up Basecamp and our first Sangha map. Basecamp is an online platform for Sangha builders to connect and share inspiration. We had identified a group of about one hundred Wake Up Ambassadors who were active Sangha builders, and we invited them all to join.

After getting to know who was out there, we were able to make a Sangha directory, placing a pin on a Google map for every Wake Up Sangha in existence. The map is a satisfying visual representation of our worldwide community superimposed on precious planet Earth. Up until this point we didn’t even know how many Wake Up Sanghas there were! We counted about thirty.

Year two, 2012-13, focused on laying the groundwork to support the formation of new groups. The Wake Up Sangha Seeding Guide was the juiciest fruit from these efforts. The guide was a collaborative effort of Sanghas around the world, offering their best practices to serve the collective wisdom. As part of this phase we also reached some harmony and standardization on things like Wake Up email addresses, what qualifies as an official Wake Up Sangha, and how to respond to inquiries about starting a group. A Wake Up Google Drive account was started to serve as a central repository of all things Wake Up.

Year three, 2013-14, focused on deepening support for both existing and new Sanghas. The major projects included a complete overhaul of the Wake Up website and creation of monthly newsletters that sourced fresh content from across the Wake Up cosmos. Every month we featured almost a dozen new articles on a wide range of topics, from interviews with monastics, to lay friends sharing about retreat experiences, to meditation-flash-mob music videos! This helped weave the Wake Up web of feeling connected, and facilitated learning from one another through stories, pictures, and songs. We also invested energy in supporting our many Wake Up Ambassadors through creating documentation for Wake Up facilitator retreats and instituting periodic conference calls.

Toward the end of 2014, coordination and energy for the Wake Up Manual book project began growing substantially. The manual is a tool for monastics and lay friends to collaborate on creating a guide for people interested in waking up together. It will feature teachings from Thay, personal stories of transformation from monastics and lay friends, and practical how-to tips. It is currently in development, so stay tuned!

Looking back on Wake Up’s growth, there is much to be grateful for. As of March 2015, more than one hundred Sanghas are listed in our global directory.

Coordination is now beginning to diffuse outward from a single international coordinator to regional coordinators, and ultimately to the Sanghas themselves. In this vein I’ve been delighted to see more established Wake Up Sanghas helping new Sanghas to form. They offer all kinds of support, from providing practical guidance on publicity to leading discussions on topics like inclusiveness and “graduating” from Wake Up by integrating with all-ages Sanghas.

Looking to the future, the idea of a Wake Up Sangha mentorship program has been gaining momentum. And perhaps someday there will be a global Wake Up Caretaking Council. When I reflect on the past, present, and future of Wake Up, above all I am simply grateful for the opportunity to have been a witness to this unfolding.

I know that it is a rare thing indeed to be able to call the people I am working with “friends.” This cozy sense of brotherhood and sisterhood is what distinguishes Wake Up from other organizations I’ve been a part of, and prevents it from being some kind of exclusive club. When we come together to practice, we know we are cells in one Sangha body. It becomes easier to breathe, easier to smile, and easier to taste freedom.

Brandon Rennels, True Garden of Faith, recently completed a yearlong stay at Blue Cliff Monastery as part of their Residential Practitioner Program. He is currently bringing his practice into the world by undergoing a certification at Search Inside Yourself and by partnering in a startup mindfulness business.